A spoonful of honey might quiet a child’s cough more effectively and safely than the most common over-the-counter cough medicine. 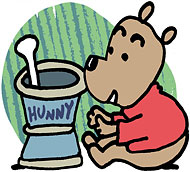 Effect of Honey, Dextromethorphan, and No Treatment on Nocturnal Cough and Sleep Quality for Coughing Children and Their Parents (The Archives of Pediatric and Adolescent Medicine)

Researchers tested 105 children 2 to 18 with coughs from upper-respiratory infections, dividing them randomly into three groups. One received no treatment. The others received a remedy, but the researchers, parents and children did not know which it was: one or two teaspoons of buckwheat honey, depending on age, or an age-appropriate dose of honey-flavored dextromethorphan. The study was supported by a grant from the National Honey Board, an industry-backed agency of the Department of Agriculture.

Using questionnaires filled out by the parents, the scientists measured cough frequency and severity, and the effect on the children’s and parents’ sleep. By all measures, honey provided the greatest relief.

Honey, the authors wrote in the December issue of The Archives of Pediatric and Adolescent Medicine, has well-established antioxidant and antimicrobial effects, and it might be that sweet substances of any kind help dissolve mucus in the airways and soothe the back of the throat.

In October, a Food and Drug Administration advisory panel recommended a ban on over-the-counter cold medicine, including some brands containing dextromethorphan, intended for children under age 6.

Dr. Ian M. Paul, the lead author and an associate professor of pediatrics at Penn State, said that parents should consider honey “as an alternative to cough medicine for children over age 1.” In rare cases, honey can cause infantile botulism in children under 1.