As a health writer, I’ve read hundreds of nutrition studies and countless books on diet and eating. And none of these has contained such useful advice as the cover of Michael Pollan’s latest book, “In Defense of Food.”

Wrapped around a head of lettuce are seven words that tell you pretty much everything you need to know about healthful eating. “Eat food. Not too much. Mostly plants.” 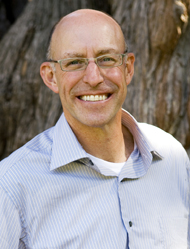 This seemingly-simple message is surprisingly complex, because there is food, and then there are what Mr. Pollan describes as “edible food-like substances.” Mr. Pollan, who writes for The New York Times Magazine, developed something of a cult following for his best-selling book “The Omnivore’s Dilemma,” which traced the food chain back to its original source. But while “Omnivore” left many scared to eat, “In Defense of Food” helps the reader bravely navigate the food landscape, explaining what food is, what it isn’t and how to tell the difference.

Mr. Pollan agreed to take some time this week to answer a few questions from the Well blog.

In this book, you talk about “nutritionism,” the tendency of scientists and nutrition experts to view food as just a sum of its nutrient parts. What’s wrong with that thinking?

Two things go wrong with nutritionism. Whatever tentative scientific information is developed, it gets very quickly distorted by the food marketers and manufacturers. They will take partial information about antioxidants, and they are suddenly telling you if you eat almonds you are going to live forever. There is a distortion of what are hypotheses of science. We’re guilty of this too. We take sketchy science, and we write headlines.

One of the things that surprised me is how poor the data is that is underlying many of these big dietary trials. If you try to fill out a food frequency questionnaire, you realize very quickly this is not good data. I was as honest as I could be and tried to remember what I’d eaten, and it claimed I was only eating 1,200 calories a day. Clearly, I was forgetting at least 1,000 calories. We know people underreport by about 30 percent. We don’t know the first thing about nutrition, which is, “What are people actually eating?” It’s hard to build good science on top of that.

Did you expect the phrase, “Eat food. Not too much. Mostly plants.” to create such a stir?

I was kind of surprised. After the original article in The Times magazine used those words, I started hearing it then. I realized they had a certain power. That’s why I encouraged the publisher to put them on the cover and give it all away there.

But it’s not as simple as it sounds, is it?

It’s not, because of all these edible food-like substances in the stores that are masquerading as food. It’s simple advice as long as you know what food is, but I spend 14 pages trying to define what food is. It’s gotten complicated because of food science and the kind of engineering that’s gone into processing food.

Speaking of engineering, food from cloned animals appears headed for approval in Europe and the United States. Does cloned food qualify as real food?

I think the bigger concern with cloned animals is not personal health. It’s what will it take to keep a herd of genetically identical chickens, horses or pigs alive? Sex and variation is what keeps us from getting wiped out by microbes. If everything is genetically identical, one disease can come along and wipe out the entire group. You will need so many antibiotics and so much sanitation to keep a herd of these creatures going. The bigger concern should be antibiotic resistance.

The nutrition community is fascinated by the French paradox ”” the fact that the French eat seemingly fattening food but don’t get fat. In your book you describe an American paradox. What is it?

So how should we think about food and health?

I think health should be a byproduct of eating well, for reasons that have nothing to do with health, such as cooking meals, eating together and eating real food. You’re going to be healthy, but that’s not the goal. The goal should just be eating well for pleasure, for community, and all the other reasons people eat. What I’m trying to do is to bring a man-from-Mars view to the American way of thinking about food. This is so second nature to us ”” food is either advancing your health or ruining your health. That’s a very limited way to think about food, and it’s a very limited way to think about health. The health of our bodies is tied to the health of the community and the health of the earth. Health is indivisible. That’s my covert message.

A reader commented recently that this sounded like a diet book. Is it?

There is no Michael Pollan diet. It’s an algorithm to help you make decisions rather than telling you narrowly: “Eat butter. Don’t eat margarine.” Although you could probably deduce that from what I’m saying. I don’t feel like it’s our job to tell people what to eat. I think our job is to help people think about it. I’m trying to take down the cult of expert eating. The danger is that I then offer myself as an expert. I’m trying to channel the wisdom of culture about eating. My idea here is that science so far hasn’t figured out nutrition well enough to be the arbiter of our food choices. When science has done that ”” take the public health campaign around fat, that has been the biggest test case ”” it didn’t work out very well. If science can’t guide us yet, who can? The answer is not me. The answer is culture, history and tradition. That’s what my rules are all about. The book is trying to show why this nutritionism approach to food doesn’t work very well, besides the fact that it ruins our pleasure in eating.

What do you eat?

I eat lots of food. What do you mean?

Does your food ever come out of a package?

Really seldom. If you look in my pantry, you won’t find that much processed stuff. Maybe some canned soups and tuna fish. I don’t have a lot of low-fat products. I much prefer to eat less of a full-fat product. You wont’ find skim milk. We’re lucky. I live in Berkeley with a farmers’ market four blocks away, and it’s open 50 weeks a year. I have the luxury of being able to buy very fresh, good food. I have a weakness for bread. A good white baguette ”” I have a weakness for that.

After reading your book, I want to plant and grow something. Do you get this a lot?

My first book was about gardening, and I like gardening. It’s a really important part of the solution. In so many places, including urban areas, there is a yard, there is a lawn, a little patch of land where you could grow food. My garden is only 10 by 20 feet. It’s a postage stamp. I grew so much food there last summer. What food is more local than the food you grow yourself, not to mention the fact that you get all this exercise while you’re gardening.

How does one stop eating edible food-like substances and switch to eating real food? Isn’t it difficult to change?

We have more choices now than we’ve ever had. There is organic food at Wal-Mart. The big challenge is that you do have to cook. A lot of us are intimidated by cooking today. We watch cooking shows on TV but we cook very little. We’re turning cooking into a spectator sport. This process of outsourcing our food preparation to large corporations, which is what we’ve been doing the last 50 years, is a big part of our problem. We’re seduced by convenience. You’re going to have to put a little more time and effort into preparing your food. I’m trying to get across how pleasurable that can be. It needn’t be a chore. It can be incredibly rewarding to move food closer to the center of your life.