The scent of a man

To attract a woman by wearing scent, a man must first attract himself 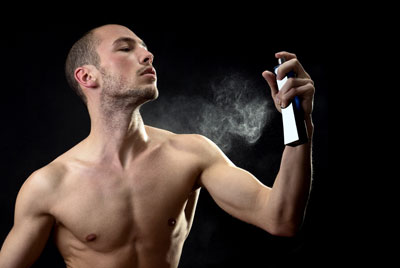 THE very word “perfume” has feminine overtones to many male ears. Men can be sold “deodorant” and possibly “aftershave”, but the idea of all those dinky little bottles with their fussy paraphernalia is too much for the sensitive male ego. Yet no industry can afford to neglect half its potential market, and perfume-makers are ever keen to crack the shell of male reticence. Now they may know how to do so.

Craig Roberts of the University of Liverpool and his colleagues””working with a team from Unilever’s research laboratory at nearby Port Sunlight””have been investigating the problem. They already knew that appropriate scents can improve the mood of those who wear them. What they discovered, though, as they will describe in a forthcoming edition of the International Journal of Cosmetic Science, is that when a man changes his natural body odour it can alter his self-confidence to such an extent that it also changes how attractive women find him.

Half of Dr Roberts's volunteers were given an aerosol spray containing a commercial formulation of fragrance and antimicrobial agents. The other half were given a spray identical in appearance but lacking active ingredients. The study was arranged so that the researchers did not know who had received the scent and who the dummy. Each participant obviously knew what he was spraying on himself, since he could smell it. But since no one was told the true purpose of the experiment, those who got the dummy did not realise they were being matched against people with a properly smelly aerosol.

Over the course of several days, Dr Roberts's team conducted a battery of psychological tests on both groups of volunteers. They found that those who had been given the commercial fragrance showed an increase in self-confidence. Not that surprising, perhaps. What was surprising was that their self-confidence improved to such an extent that women who could watch them but not smell them noticed. The women in question were shown short, silent videos of the volunteers. They deemed the men wearing the deodorant more attractive. They were, however, unable to distinguish between the groups when shown only still photographs of the men, suggesting it was the men's movement and bearing, rather than their physical appearance, that was making the difference.

For Unilever and other manufacturers of men's scent, this is an important discovery. The firm's marketing of its main product in this area, a deodorant called Lynx, plays up the so-called “Lynx Effect”””which is supposed to make men irresistibly attractive to women. Dr Roberts's experiment, however, suggests that the advertised “Born chicka wah wah” of the product may have nothing to do with a woman's appreciation of the smell, and everything to do with its psychological effect on the man wearing it.

Nor is this the only example of science illuminating the true role of perfumes. How they work to make people attractive is, as this example shows, not as obvious as it might seem.

There are three broad theories of perfume use. One is that people employ it to mask body odours that they perceive as bad. The second is that some perfumes contain chemicals that mimic human pheromones””elusive, mysterious (and possibly mythical) substances believed by some to play a role in mating. The third is that people use it to heighten or fortify natural scent, and thus advertise sexual attractiveness or availability.

All three theories could be true. In particular, the role of perfume as an olfactory disguise is obvious. Even here, however, there are some subtle twists. Bad smells are not just a matter of poor hygiene. Illness and old age both bring characteristic odours of their own, and neither state makes people more attractive. Perfumes may spoof these messages. Hence the marketing of a new scent called Ageless Fantasy, by Harvey Prince, which claims its product disguises the “odour of ageing”, suggested to be caused by the breakdown of a particular fatty acid in the skin.

As to pheromones, whether humans have these is questionable. A pheromone is a chemical that elicits a specific behavioural response at a distance. Some insects, for example, can release sex pheromones that will attract a mate from many kilometres away. The most likely human candidate is a substance called androstadienone. This is a derivative of testosterone that is found in men's sweat and is known, from brain-scanning studies, to promote activity in parts of women's brains. That this results in changes in behaviour has not, however, been clearly demonstrated.

Terri Molnar, a spokeswoman for the Sense of Smell Institute, a research organisation in New York tied to the fragrance industry, says of human pheromones, “I think we believe they exist but they do not function as an attractant. They will elevate one's mood but not attract a mate.”

The fallen sons of Eve?

The most interesting area, though, is the interaction between perfumes and natural scents that carry messages but do not have the specific properties of pheromones. Odours co-ordinate a wide range of human behaviour. Mothers can recognise their children by smell. Children can recognise each other. Relatives can be distinguished from non-relatives, even to the extent of understanding who is genetically different enough from the smeller to be a good choice of mate. The sexes themselves smell different, too, and women can glean information about a man's social status from his smell alone.

As long ago as the 1950s, a perfumer called Paul Jellinek noted that several ingredients of incense resembled scents of the human body. It was not until 2001, however, that Manfred Milinski and Claus Wedekind of the University of Bern wondered whether there was a correlation between the perfume a woman preferred and her own natural scent. They found that there is.

The correlation is with the genes of what is known as the major histocompatibility complex (MHC). This region of the genome encodes part of the immune system. It turns out that one of the most important aspects of mate choice in mammals, humans included, is to make sure that your mate's MHC is different from your own. Mixing up MHCs makes the immune system more effective. The MHC is also thought to act as a proxy for general outbreeding, with all the hybrid vigour that can bring. Fortunately, then, evolution has equipped mammals with the ability to detect by smell chemicals whose concentrations vary with differences in the MHC of the producer.

That means people are able to sniff out suitable MHC genomes in prospective partners. A woman, for instance, will prefer the smell of T-shirts that have been worn by men whose MHC genes are appropriately different from their own. Dr Milinski and Dr Wedekind also found an association between a woman's MHC genes and some of her preferences for perfume. Perception of musk, rose and cardamom is correlated with the MHC. Perception of castoreum and cedar is not.

Women, it seems, choose not the kind of smell they would like on a partner, or even one that might mask a nasty odour of their own, but rather something that matches their MHC. In other words, they are advertising their own scent.

There are many useful inferences that might be drawn from this research. One would be that a woman's choice of perfume will resist the vagaries of fashion. This may explain why most innovation in the industry involves changes in packaging and marketing, producing all that fussy paraphernalia, rather than changing what is in the bottle.

Another implication, says Dr Roberts, is that it is probably best that people choose perfumes for themselves rather than for someone else””unless they happen to know what the recipient likes. If you have made a good genetic choice of partner (ie, someone with a significantly different MHC), then the theory suggests that you should not be able to choose something that smells nice to them based on your own preferences. You might, though, have better luck choosing for a close relation, because she would probably have an MHC similar to your own.

The research also raises the question of what so-called unisex perfumes are for. In any genetically successful love match, one of the partners ought to hate a unisex perfume. Perhaps, in a world of olfactory fakery, this is one tip for the wise. If your partner has a strange knack of being able to pick out all the right perfumes, this may not be a good sign at all. And that, of course, means that the best you can hope for this Christmas is that he has bought you a perfume that you absolutely hate.