State Dept. Will Not Renew Security Firm’s Contract Amid Lingering Outrage Over 2007 Shooting That Killed 17 Iraqis 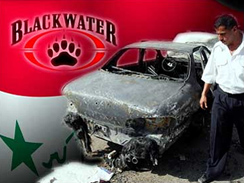 Five Blackwater security guards are charged with killing at least 15 Iraqis with a barrage of bullets and grenades. The guards claim they were under attack. Elizabeth Palmer reports. | Share/Embed

A daily diary with scenes of the latest attacks and snapshots from the effort to rebuild a nation.

(AP) The State Department will not renew Blackwater Worldwide’s contract to protect American diplomats in Iraq when it expires in May, a senior U.S. official said Friday.

The official told The Associated Press that the contract will expire because of the Iraqi government’s decision to deny Blackwater a license to operate. The Iraqis informed the State Department last week of the cancellation, which was made amid lingering outrage over a September 2007 shooting in Baghdad’s Nisoor Square that left 17 Iraqi civilians dead.

“The Blackwater contract for Iraq will not be renewed,” the official said, adding, however, that it was “basically a moot point because they were not going to be allowed to operate in Iraq anyway.”

The official spoke on condition of anonymity because the decision has yet to be announced.

The State Department said Friday that it was still considering options on how to protect U.S. diplomats in the wake of the Iraqi denial of Blackwater’s operating license.

Officials have said one possibility would be to replace Blackwater with one or a combination of guards from two other U.S.-based security contractors that work for the State Department in Iraq – DynCorp and Triple Canopy. Both have licenses to operate in Iraq.

Blackwater executives say the company could leave Iraq within 72 hours of being told to do so, but caution that such a move would cause more harm to the diplomats it protects than the company itself.

In a Thursday interview with the AP at the firm’s North Carolina headquarters, Blackwater founder Erik Prince said he had not received any indication from the State Department that it would be ordered to evacuate in light of the license denial.

The Nisoor Square shooting strained relations between Washington and Baghdad and fueled the anti-American insurgency in Iraq, where many Iraqis saw the bloodshed as a demonstration of American brutality and arrogance. Five former Blackwater guards have pleaded not guilty to federal charges in the United States that include 14 counts of manslaughter and 20 counts of attempted manslaughter.

Blackwater maintains the guards opened fire after coming under attack, an argument supported by transcripts of Blackwater radio logs obtained by the AP. They describe a hectic eight minutes in which the guards repeatedly reported incoming gunfire from insurgents and Iraqi police.

A U.S.-Iraqi security agreement, which took effect Jan. 1, gives the Iraqis the authority to determine which Western contractors operate in their country.

Blackwater has been operating in Iraq without a formal license since 2006. The State Department extended Blackwater’s contract for a year early in 2008, despite widespread calls for it to be expelled because of the shootings.

Blackwater’s work in Iraq, which includes a reputation for aggressive operations and excessive force it disputes as unfair and inaccurate, turned the company into a catchall brand name for private security contractors. Executives said last year that the unwanted attention had them shifting their focus away from private security.

Executives also acknowledged that losing a contract that comprises one-third of the company’s annual revenues could disrupt its growth.

However, Blackwater has also repeatedly said that it performs the contract at the request of the government, noting that while revenues for the contract are high, the margins are low, and the work in Iraq has sullied Blackwater’s brand. Executives said this week that they would prefer to focus on other endeavors, such as international training and aviation support, where they see greater room for growth.

Separate from its State Department work in Iraq, the company trained some 25,000 civilians, law enforcement and military personnel last year. It has a fleet of 76 aircraft, with many of them deployed in Afghanistan and West Africa.