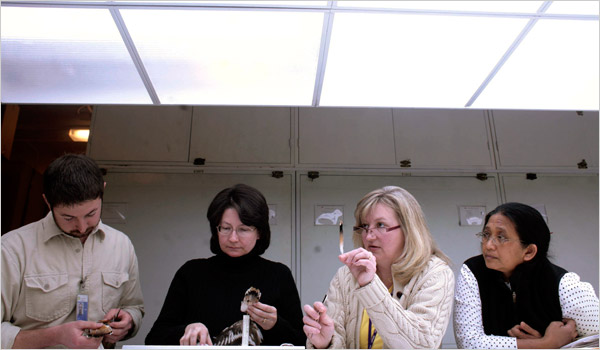 James Whatton and Marcy Heacker, research assistants; Carla Dove, the director; and Faridah Dahlan, a genetics specialist, all work at the Feather Identification Lab at the National Museum of Natural History.

WASHINGTON ”” Clues from the wreckage from US Airways Flight 1549, which crashed in the Hudson River, are going to the best investigators in the world: the black boxes to the National Transportation Safety Board, the engines to the manufacturer’s experts and a bird feather to a Smithsonian museum.

The National Museum of Natural History in Washington may not leap to mind when both engines on a high-tech plane quit at 3,200 feet. But around the corner from the stuffed African elephant that greets the visiting hordes of schoolchildren, down a back hall from the employee bike rack, a staff of four in the Feather Identification Lab took in samples from 4,600 bird-plane collisions, or bird strikes, last year. Arriving mostly in sealed plastic bags, these included birds’ feet, whole feathers or tiny bits of down, and pulverized bird guts, known as snarge.

Correctly identifying the species involved in a bird strike can be important, said Carla J. Dove, the lab’s director. “If people know the cause of a problem, they can do something about it,” she said. “If you have cockroaches, you don’t call an ant exterminator.”

One key to reducing bird strikes is to move the species causing the problem, she said. That might mean mowing a certain area, or filling in a pond frequented by a species of duck.

The feathers or other bird parts submitted are compared against a library of 620,000 bird samples, some gathered by Darwin and Audubon. Another contributor was Theodore Roosevelt, who collected birds around the family home in Oyster Bay, on Long Island, before he switched to hunting big game. And if the feathers do not make the case, the snarge goes to the DNA section, which has a huge database. Between the two, the success rate of identifying the type of bird involved is 99 percent.

And for high-profile crashes, identification both by feather structure and by DNA will be performed. A bird strike over the Bronx reported by the pilot minutes after Flight 1549 took off from La Guardia Airport may have caused both engines to fail, forcing the emergency splash into the Hudson, which all 155 people on board survived. The feather was discovered attached to one of the plane’s wings.

Researchers at the Smithsonian would not discuss their role in the US Airways investigation, but did talk about their work in other cases.

On a lab table under color-balanced lights, Dr. Dove opened a zip-top bag with some brown and white feathers from a recent bird strike involving an American military plane in Rota, Spain. In the field, investigators had identified the feathers as being from a long-eared owl, but putting one on the table, Dr. Dove saw that was not right. She reached for an eagle owl, a bigger bird of similar coloring. “See how nicely this matches,” she said.

For forensic ornithologists, it just doesn’t get any better than this.

Crash investigation is a relatively recent endeavor for the museum. “This collection started before there were even airplanes,” said Marcy Heacker, one of the museum’s investigators, referring to the vast repository of birds. But ever since an October 1960 crash at Logan Airport in Boston, in which an Eastern Airlines Electra hit a flock of starlings, safety investigators have called on the Smithsonian for help.

Most of the bird samples come from the Air Force and the Navy; the Pentagon wants every bird strike investigated. Military planes are more vulnerable to such strikes because they often fly at low altitudes and often in single-engine planes.

Often the military’s bird strikes occur in far-removed places like Afghanistan and Iraq, but the lab, which stores about 85 percent of the world’s bird species, is prepared.

Crashes caused by bird strikes are intermittent in small planes and rare among airliners. Government records show five strikes with scheduled airliners in this decade, not counting Flight 1549, that have produced significant damage.

Feathers that are intact can be matched against a sample. If fluff or down is all that survives, researchers using 100-power magnification will look at the pattern of nodes on the microscopic feather structures to identify them.

Turnaround time is usually very short, but sometimes the lab finds a problem. Faridah Dahlan, a geneticist, tested a sample a year ago that indicated it had come from a deer.

Airplanes do sometimes hit deer, but a phone call to the pilot confirmed that this strike was at 1,500 feet, so more investigation was required.

Eventually, the lab used a tiny piece of feather to determine that the bird was a black vulture. The bird apparently had deer flesh in its belly.

Ms. Dahlan said getting DNA samples from small bits of bird flesh was not a challenge. In a previous job, she said, “I used to do ants.”