High frequency voltages present on the electrical power wires in homes, offices, schools and factories should be considered a potential pollutant. An inexpensive and simple to use instrument is described for measuring these voltages.

The letter of May 4, 1999, by Kenneth Olden which accompanied the NIEHS Report on Health Effects from Exposure to Power-Line Frequency Electric and Magnetic Fields (1) contains the following paragraph:

The lack of connection between the human data and the experimental data (animal and mechanistic) severely complicates the interpretation of these results. The human data are in the “right” species, are tied to “real life” exposures and show some consistency that is difficult to ignore. This assessment is tempered by the observation that given the weak magnitude of these increased risks, some other factor of common source of error could explain these findings. However, no consistent explanation other than exposure to ELF-EMF has been identified.

This report suggests that the “some other factor” is high frequency currents, i.e., much higher frequency than the power line frequency. High frequency voltage can cause currents to flow in humans by direct contact, or by capacitive coupling. The effects on humans will depend on the magnitude, wave form, duration, and path taken through the body. The voltage causing these currents should be considered a pollutant.

It is always a problem as to where to measure a pollutant such as high frequency electric fields. An instrument has been developed to do a very simple measurement. The measured voltage is that present at the standard household electrical outlet. A filter (Figure 1) is used to remove the power line frequency and its harmonics. The remaining voltage is applied to an RMS digital voltmeter. The frequencies that are measured are determined by the filter and the characteristics of the meter. The FLUKE 79 III meter responds to frequencies above 10,000 Hz. The voltage amplitude measured will be that present on wires and electrical equipment in that home, office, school or factory. (2) The amount capacitively coupled to a human will depend on many variables, but a larger voltage at the outlet will result in larger currents in the humans. The high frequency voltage originates in modern electrical equipment, particularly high efficiency electrical equipment. The level of this high frequency voltage will vary with what electrical equipment is on at that location and with the time of day, due to the varying load on the electrical utility system which also contributes to this pollution.

Experiments are being performed to improve the design of this instrument and the interpretation of the readings. 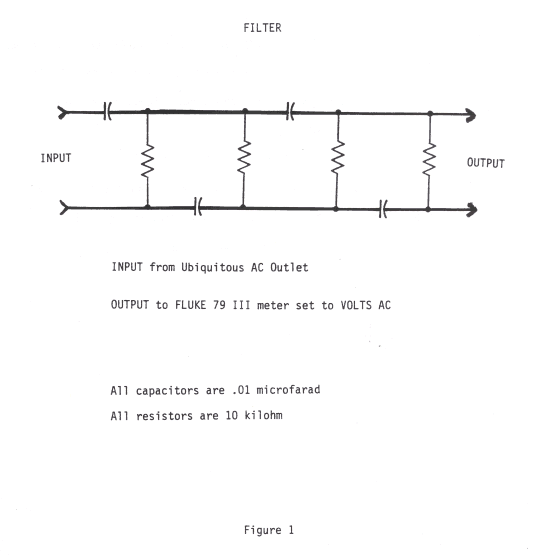 (2) Exploratory measurements of this voltage varied from tens of millivolts to hundreds of millivolts. The voltage induced by a two milligauss 60 Hz magnetic field passing through a one square meter area is less than 0.1 millivolt.