Up with People!   (down with leaders)

People tend to get along and be helpful.
Leaders tend to foment disagreement as a way of assuring their worth.

The emperor has no clothes;  we have nothing to fear from different people.

This fellow tore down the veil of dis-information and is to be commended!

He is a humanist and sets a great example! 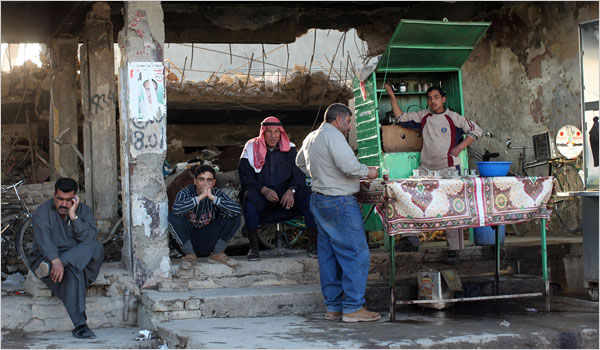 Falluja, once the scene of some of the fiercest fighting of the Iraq war, is calmer now, but not exactly ready to receive tourists yet.

BAGHDAD ”” “I am a tourist,” were his first words. The telephone line from Falluja was bad, but there could be no mistake. Falluja’s first Western leisure visitor was in town.

Not for long, though. An Iraqi checkpoint guard spotted the traveler, Luca Marchio, among Iraqi passengers in a public minibus heading from Baghdad to the once notorious ”” and still tense ”” city and alerted his superiors.Soon, Mr. Marchio, 33, a native of Como, Italy, found himself in the Falluja police headquarters surrounded by bewildered Iraqi officers trying to figure out why a Westerner would wander around this city without a translator or guards. Mr. Marchio may have worried the police, but his main concern was saving money.

In two telephone interviews he brushed away all concerns for his safety and offers of help.

“I am a tourist. I want to see the most important cities in the country. That is the reason why I am here now,” he said in heavily accented English. “I want to see and understand the reality because I have never been here before, and I think every country in the world must be seen.”

Mr. Marchio said he had intended on staying overnight in Falluja, but was forced to alter his travel plans. “The authorities explained to me that it was impossible because there are not any hotels here. They suggested a short tour and then go back to Baghdad.”

Piecing together an unusual travel itinerary from an unperturbed Mr. Marchio, incredulous Iraqi and Italian officials told the strange story of an accidental tourist.

After being made aware of Mr. Marchio’s presence in the country by The New York Times, the Italian Embassy in Baghdad established that Mr. Marchio had traveled from Italy to Egypt, then to Turkey, and from there to northern Iraq over land. A photocopy of his passport shows that he obtained a 10-day visa and crossed the border from Turkey to Kurdistan.

Then came a 200-mile journey by taxi from Erbil, the Kurdistan regional capital, to Baghdad, where a startled Bashar Yacoub, 31, reception manager at the Coral Palace ”” a hotel that had not had a casual Western visitor since the American invasion in 2003 ”” took his details.

A good Iraqi bureaucrat, Mr. Yacoub checked Mr. Marchio’s documents and despite qualms about hosting a foreigner found his papers in order and gave him a room key. “He told us he just wanted to see Baghdad,” Mr. Yacoub said.

Asked if he thought Iraq was ready for tourists, Mr. Yacoub said, “No.” When he was asked if he believed Falluja was safe for tourists, his emphatic “no” was echoed by staff members and guests standing within earshot.

But there was no stopping Mr. Marchio. For an extra $40, the hotel gave him a tour of Baghdad sights, driving him along the riverfront, where he could photograph a statue of Scheherazade, the narrator of “The Thousand and One Nights,” and see children playing in a riverside garden. He proceeded to the artificial lake near Baghdad University and then to the square named after Baghdad’s founder, Abu Jaafar al-Mansur, on the west bank of the Tigris.

He went on to Zawra’a Park, a family spot with a small zoo and rides. He finished his day in the affluent but bomb-scarred shopping district of Karada, where his guide for the day, Ramez Fa’eq, 23, said, “When it became dark, he got afraid and wanted to return home to the hotel.”

The next morning he set out for Falluja despite the hotel staff’s efforts to dissuade him, insisting on taking a public bus to the city, 40 miles west of Baghdad.

Within hours, the hotel staff received a call from the Falluja police. “I wasn’t surprised when they called,” Mr. Yacoub said. The police told him that they had found Mr. Marchio in a minibus next to a woman who sold fresh milk, yogurt and cream door to door. “They were very worried about him,” Mr. Yacoub said.

For the eager Mr. Marchio, that was the end of his bella viaggio in Iraq.

The police summoned local Iraqi journalists to tell them of the wandering Italian, American marines were called in, the Italian Embassy was notified. The police concluded that Mr. Marchio was not an Italian jihadist and was a risk to no one but himself. An American marine working with the police suggested taking him to the city limits and dropping him where Falluja met the main highway.

“I explained to him that it was not safe to move around,” said Renato Di Porcia, the deputy chief of mission at the Italian Embassy in Baghdad. “He is a little bit naÃ¯ve.”

On Friday night Mr. Marchio was being held for his own safety, the Iraqi police said. “He will leave with the earliest flight tomorrow morning,” Mr. Di Porcia said.

When will Iraq be safe for tourists?

The Coral Palace’s reception manager considered the question. He pointed out that there already were Shiite religious tourists in Najaf and Karbala. “But the general tourists, no,” he said. “I can’t guess when because now the security situation is good, but you know this country, you can expect anything any minute.”

Mr. Di Porcia said that the Italian Foreign Ministry’s official advice for travelers is not to visit Iraq, and for those who must, “have a security framework.”

“It was quite a strange situation,” he said. “I am looking forward to visiting all the beautiful places around Iraq, but I think not yet.”

Mohamed Hussein contributed reporting from Baghdad, and an Iraqi employee of The New York Times from Falluja.