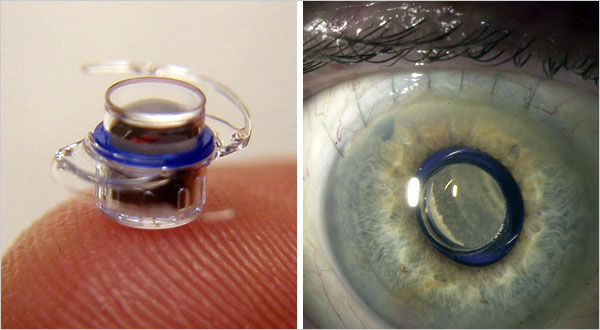 A tiny telescope, already approved for use in Europe, can be implanted in one eye to help people with an advanced form of macular degeneration. The device takes the place of the natural lens.

A TINY glass telescope, the size of a pea, has been successfully implanted in the eyes of people with severely damaged retinas, helping them to read, watch television and better see familiar faces.

The new device is for people with an irreversible, advanced form of macular degeneration in which a blind spot develops in the central vision of both eyes.

In a brief, outpatient procedure, a corneal specialist implants the mini-telescope in one eye in place of its natural lens. The telescope magnifies images on the retina, extending them so they fall on healthy cells outside the damaged macula, said Allen W. Hill, chief executive of VisionCare Ophthalmic Technologies in Saratoga, Calif., the implant’s maker.

In March, an advisory panel to the Food and Drug Administration unanimously recommended approval of the device. VisionCare says it expects the F.D.A. to give its O.K. later this year. The device has already been approved for use in Europe.

The implanted telescope holds much promise for patients, typically elderly, who suffer from end-stage, age-related macular degeneration, or A.M.D., said Janet P. Szlyk, a member of the advisory panel. Dr. Szlyk is executive director of the Chicago Lighthouse for People Who Are Blind or Visually Impaired, a social services agency.

The device does not cure the disease, but it does improve visual acuity, she said. For example, a person who might usually see a blur when looking at a friend’s face might, with the help of the magnified image, see a blur only in the area of the person’s nose or mouth.

“People can use it to recognize faces in a social setting,” she said. ”˜That’s a huge advance.”

The telescope is implanted in one eye for jobs like reading and facial recognition. The other eye, unaltered, is used for peripheral vision during other activities like walking. After implantation, extensive therapy is crucial, she said, to learn to deal with the different abilities of the eyes.

Ruth A. Boocks, 86, of Alpharetta, Ga., who received an implant of the device in March 2003 during clinical trials, said her brain learned to adapt quickly. Mrs. Boocks uses her new visual abilities in various ways ”” for instance, to read e-mail and the messages that scroll across the bottom of the screen when she’s watching television. “My goal was to read to the bottom of the eye charts,” she said. “But I didn’t quite make it.” (She has gotten to the third line from the bottom.)

“I feel like a young woman,” she added. “It’s opened a lot of opportunities for me.”

Henry L. Hudson, a retina specialist in Tucson, Ariz., and lead author of two papers on the telescope published in peer-reviewed journals, said the device was not for everyone with A.M.D. “Maybe only 20 out of every 100 candidates will get the telescope,” he said. “They may not be eligible because of the shape of their eyes,” or they may have another problem, like maintaining balance, that precludes their selection, he added.

After F.D.A. approval, VisionCare will apply to Medicare to cover the device, Mr. Hill said. “We anticipate that it will be seen as a covered benefit for the improvement of visual acuity,” he said.

The price of the device has not been set. Current tools for ameliorating low-vision problems, like glasses fitted with telescopes or reading machines, are typically not covered by insurance.

Dr. Bruce P. Rosenthal is chief of low-vision programs at Lighthouse International in New York City, where telescopes mounted on eyeglass frames, for instance, might be prescribed for people with A.M.D. to help them watch a sports event. He said that patients might be as well served by these glasses as by the new implants, and that he hoped long-term studies would compare the benefits of the two approaches.

“Even though studies on the implants have reported minimal complications, there can be complications when you are inserting anything in the eye,” he said. “Even routine cataract surgery can lead to loss of vision.”

Dr. Rosenthal said the implanted telescope might be beneficial for some patients, “especially if they don’t want other people to know they are visually impaired.” Telescopes mounted on eyeglasses bulge outward, often extending an inch or so beyond the frames.

But he is concerned that people using implants might have trouble with balance. “There is a potential for falling when a person has a big image from one eye and a normal-sized image from the other,” he said.

DURING trials of the device, there was no increase in the incidence of falls among participants, Dr. Hudson said. More than 200 patients received implants in the study, and the effects have been tracked in the group for the past five years.

“The vast majority of the patients have been able to adapt to the new state,” using one eye for ambulating and the other for reading, facial recognition and similar chores, he said. “The average patient goes from legally blind to being able to read large-print books.”