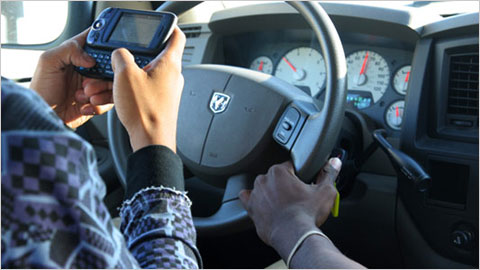 Dan Gill for The New York Times Was this photo real or staged?

When I first saw a New York Times photo of a teen texting while driving, I had assumed it was just a photo illustration. The picture showed the driver texting with both hands ”” a youth in the passenger seat was steadying the wheel. The spedometer visible in the photo suggested the car was moving at 60 miles per hour. It was too crazy and too horrible to be real.

But I learned this weekend that the photo is real ”” captured by coincidence while a Times photographer working on an unrelated story was riding in the back seat.

Public Editor Clark Hoyt explored the origins of the photo in his latest column, A Dramatic Photo: Was It Real?

The photographer, Dan Gill, a freelancer, took the picture last November while on assignment for The Times for an entirely different story – an H.I.V. scare at a St. Louis high school. He said the picture was not staged and that he was just doing what Times editors asked: recording the lives of some students at the school. Gill said he had several conversations with a Times photo editor about issues like whether to ride with kids when they drove to a mall to meet girls. He suggested he do it to build rapport, and the editor agreed.

On the way, Gill said, the driver was constantly texting what he called “one of his girls.” Gill, buckled in the back seat, said the moment he captured, when the passenger took the wheel, lasted no more than 30 seconds. “There were no wild movements of the vehicle,” he said. “It didn’t raise the hairs on the back of my neck.” In fact, he said, “It was done so quickly it seemed like common practice – not that it was safe. It wasn’t safe.” …

Gill said he knew the behavior was dangerous and probably illegal, but he had the sense that the kids did it all the time. “Would they have done this if I wasn’t there? I think they absolutely would,” he said. “Do they do it now? I think they do.”

Readers have debated whether Mr. Gill should have taken the picture or stopped the dangerous driving behavior. But in my view, thank goodness he had the sense to snap the photo. I think it illustrates better than any story could how routine texting and driving has become for many teens. I hope parents will show the photo to their kids and have regular conversations about the perils of driving while texting.