Dr. Weeks’ Comment:   venoms are potent biological substances. Used wisely, they are heap big medicine.   Out of the hive and into the drugstore…   or just visit you local beekeeper! I worked with Charlie Mraz, my teacher in bee venom therapy, back in the early 1980s and he was a brilliant, compassionate, courageous  and wise clinician.

A bee sting can be painful, but its venomous payload might hold promise for a beneficial purpose””fighting cancer.

Researchers at Washington University in St. Louis have used an ingredient of bee venom called melittin to shrink or slow the growth of tumors in mice. Melittin’s anti-tumor potential has been known for years, but it hasn’t been used as a drug because it also attacks healthy cells, including vital red blood cells.

Now the researchers have found a way, using the burgeoning field of nanotechnology, to pinpoint tumors for attack by melittin while largely shielding healthy cells. They do this by attaching the bee-venom ingredient to nanoparticles, which are ultra-tiny, synthetically manufactured spheres. The resultant product, called nanobees, are injected into the blood stream where they circulate until they reach and attack cancerous tumors. The approach also has the potential to avoid some of the toxic side effects seen in older cancer therapies like chemotherapy. 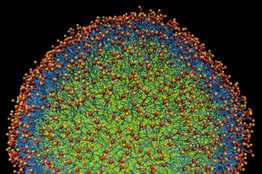 Computer simulation of a nanoparticle””in life, a sphere.

us lesions. The experiments showed minimal toxicity to healthy cells from the treatment.

“In effect, we’ve got something that does what a bee does except it’s a synthetic particle. It’s got a stinger and injector to insert the toxin into a cell,” says Samuel Wickline, a professor at Washington University’s medical school.

The efforts to fight cancer using nanobees reflect a broader body of research and development that focuses on targeting the delivery of drugs directly to tumors. That contrasts with traditional treatments such as chemotherapy, which goes after any cell that divides rapidly, cancerous and healthy alike.

Newer drugs such as Avastin are designed to home in on tumor cells, in Avastin’s case by blocking the growth of new blood vessels that feed tumor growth. Even some forms of chemotherapy can be programmed to be more targeted””the drug Doxil, for instance, shields chemotherapy inside a rubbery coating, which helps it evade the body’s immune system and circulate longer in the blood, giving it more time to reach tumors.

The nanobee discovery was serendipitous, emanating not from a cancer-research lab per se, but rather from an intermingling of scientific disciplines at Washington University. Dr. Wickline was trained as a cardiologist and also has a background in physics and biomedical engineering. He specializes in finding new applications for nanoparticles””the tiny spheres that are produced from rigorously mixing an oily substance known as perfluorocarbon, fatty substances called lipids, and lecithin, which is found in egg yolks.

One of Dr. Wickline’s students was Neelesh Soman, a medical doctor who began studying for his Ph.D. in biomedical engineering at Washington University in 2003. Within a couple of years, Dr. Soman was exploring the mechanism by which nanoparticles could deliver drugs to tumors. The trick is to find the right drug, one that will form a good attachment to the nanoparticle, then detach when it is ready to do its job.

In advising Dr. Soman, Dr. Wickline consulted Paul Schlesinger, a professor of cell biology and physiology at Washington University. Melittin belongs to a class of natural substances known as host-defense peptides, which have been known to have anti-cancer properties, and Dr. Schlesinger says he began to suspect that the nanoparticles might attach well to the melittin.

Among Dr. Soman’s first experiments was to see how melittin interacted with the nanoparticles. He found that not only did it attach quickly to the outer, lipid layer of the nanoparticles, but that the attachment was stable, suggesting that the nanoparticle-melittin combination, or nanobee, might be able to circulate in the body and not attack healthy cells.

The next issue was to figure out how to get the melittin, once it came upon a tumor, to detach from the nanoparticle and transfer to the cancer cells, taking its cell-killing properties with it. The researchers accomplished this by attaching a third component to the mix””a ligand, which is a chemical that binds two distinct compounds. The ligand they used in this case””which Dr. Schlesinger likens to a “molecular ZIP Code”””has an affinity for attaching to a receptor plentiful in newly formed blood vessels. That’s useful in cancer treatment because tumors tend to form new blood vessels to feed themselves and grow.

The scientists began testing the resulting mix, which resembles a milky substance, in mice in 2007. They tried it on a few dozen lab mice with three kinds of tumors: a mouse form of skin cancer; a form of human breast cancer transplanted into the mice; and precancerous lesions caused by human papillomavirus, which can cause cervical cancer in humans.

After about two weeks of treatment, the nanobees slowed the growth of the breast-cancer tumors, shrank the melanoma tumors and reduced the precancerous lesions, compared with control groups that received saline injections and nanoparticles lacking melittin.

“The nanoparticle attaches itself to the cell of choice and then the melittin material comes off the particle and goes directly into the cell, without going into the bloodstream. It’s like an injection,” says Dr. Wickline. Melittin kills by forming pores in the cell membrane, he says.

Another potential benefit: The nanobees appeared in the mice experiments to destroy cancer cells in a process known as apoptosis, a naturally occurring cause of cellular death. By contrast, necrosis, a process of cellular death that is caused by external factors such as infections, trauma and some forms of chemotherapy, can cause damage to other parts of the body.

The researchers reported no significant signs of organ toxicity as a result of the nanobee treatment. However, they say that they don’t know how the nanobees, because of the attached ligand that targets newly formed blood vessels, might affect such blood vessels in other, healthy parts of the body.

The mice were euthanized after the experiments and so the researchers didn’t track whether the nanobees’ effect on tumor growth translated into improved survival.

The melittin used in the experiments is made synthetically in the lab, not extracted from real bee venom. It also doesn’t trigger the kind of allergic reactions to bee stings that other components of bee venom do. The nanoparticles allowed the researchers to inject into the mice what would have been a lethal dose of melittin had it been injected on its own. That much free melittin would kill a mouse by destroying its red blood cells, Dr. Schlesinger says.

Dr. Soman, who says he was “elated” the day he first learned of the positive results in late 2007, received his Ph.D. from Washington University last year and has taken a job at biotechnology giant Amgen Inc.

The nanobee technology has been licensed to Kereos Inc., a small biotechnology company co-founded by some of the Washington University researchers. The company may seek to start human trials in a couple of years, says general manager Philip Buckler.

The buzz about nanobees has reached other scientists. David Hoskin, who specializes in cancer research at Dalhousie University in Halifax, Nova Scotia, called the results “pretty impressive” and “unique.”

“The delivery technology they’ve developed allows for relatively long-term persistence of these peptides in the body [without significantly harming healthy cells] and their specific targeting to tumor sites,” says Dr. Hoskin, whose review of host-defense peptides in a medical journal last year was cited by the Washington University researchers in their new paper. “The danger is that if this goes to clinical trials, that human tumors may not respond to this particle in the same way that tumors in mice do,” Dr. Hoskin says.

Write to Peter Loftus at peter.loftus@dowjones.com