Dr. Weeks’ Comment:  As I warned people in a prior posting,  “Do you mind if I WIFI.”,  it is NOT safe to be exposed to second-hand electrical pollution.  Once you understand the toxic effects, you will not relish the idea of being bombarded while sitting in a flying aluminum can with the resulting magnification of radiation. 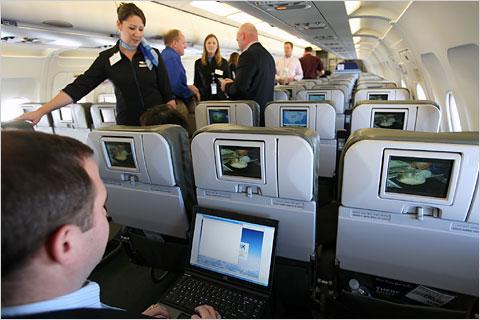 Mark Lennihan/Associated Press On board a JetBlue Airbus A320 aircraft, which is equipped with wireless Internet access.

Airlines are moving fast to make wireless Internet connections available (for a fee) on planes, the last bastion of cellphone and Blackberry-free space. (The Federal Aviation Administration bans cellphone use on planes, but Wi-Fi connections can make Internet phone services available.)

Most surveys of passengers show strong opposition to allowing mobile phones on planes ”” either because most people don’t want to hear phone calls around them or because they don’t want their bosses and clients reaching them even when they’re 30,000 feet up. And yet, the airlines are betting that if Internet service is offered, people will use it.

What explains this contradiction? Why are we addicted to having constant connections to the office even when we resent it?

We can’t ever seem to get time to relax these days. The latest instantiation of the 24/7 economy is the increasing numbers airlines that now offer Wi-Fi access for which many of us willingly pay ”” even as we protest that we value a signal-free flight.

It’s simple to blame this “connectivity trap” on techno-addiction ”” that if offered the chance to login, we simply cannot resist, as if Wi-Fi were a slice of chocolate cake. But as we see ever more people plugging in on planes, it’s easy to miss the forces that push them to violate their own stated preferences for flights full of trashy novels, $5 cocktails and time to stare at the clouds.

With more women working, both parents have to rely on constant connectivity to balance their household responsibilities with their work life.

First among those social forces is the incredible recent rise in working women over the past quarter century. Back in the 1950s, only 17 percent of mothers worked outside the home. In 1975, at the height of second-wave feminism, only one-third of mothers did. But by 2000, this norm had completely flipped so that more than two-thirds of women with children at home worked in the formal labor market.

In fact, thanks to disproportionate job losses in predominantly male industries, women now exceed men in the labor market for the first time in American history.

What does this incredible social shift have to do with Wi-Fi usage on airplanes? With an increasing number of mothers working, both parents now rely on constant connectivity to balance their household responsibilities with their work life.