Quandary With Mammograms: Get a Screening, or Just Skip It?

Here we go again. Another study raises questions about the benefits of mammograms, and another set of confusing statements issue forth from experts. 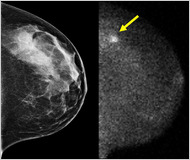 The Mayo Clinic, via Associated Press

A tumor detected by molecular breast imaging, right, was not found in a mammogram.

Last month, Dr. Otis Brawley, the American Cancer Society’s chief medical officer, told The New York Times that the medical profession had exaggerated the benefits of cancer screening, and that if a woman refused mammography, “I would not think badly of her, but I would like her to get it.”

Then, the cancer society issued a statement saying women over 40 should keep having mammograms every year, because seven studies have shown that the test decreases the risk of death from breast cancer.

But the statement also said mammography can “miss cancers that need treatment, and in some cases finds disease that does not need treatment.” In other words, the test may lead to some women being treated, and being exposed to serious side effects, for cancers that would not have killed them. Some researchers estimate that as many as one-third of cancers picked up by screening would not be fatal even if left untreated. But right now, nobody knows which ones.

So what are women supposed to do?

Mammograms are no fun, to put it mildly. Like many women, I have been putting up with them in hopes that, if I get cancer, they might find it early enough to save my life and maybe help me avoid extensive surgery and chemotherapy. Have I been kidding myself?

Hoping to make sense of it all, I consulted several experts. All said mammograms were still important ”” after all, breast cancer kills 40,000 women a year in this country ”” but they differed about who really needed them and how often. All agreed that research was badly needed to figure out how to tell dangerous tumors from the so-called indolent ones.

One of the experts was Dr. Laura J. Esserman, a breast surgeon from the University of California, San Francisco, and author of the Oct. 21 report in The Journal of the American Medical Association that touched off the latest debate about mammography. Dr. Esserman described breast cancers as slow, medium or fast in growth rate and aggressiveness, and said screening seemed to be good at finding the slow ones, which probably didn’t need treatment, but might not catch the aggressive and deadly types before they began to spread. But it also picks up the medium ones, and those are the women who may benefit most. Again, more research is needed to figure out which kind of tumor a patient has.

“The first thing to talk about is who’s helped and who’s not,” Dr. Esserman said. In her view, women over 70 or 75 can stop being screened, because no studies have shown that it helps them. If they do develop breast cancer, she said, it is likely to be a slow-growing type that will not kill them.

Like many other researchers, she said that, despite the cancer society’s guidelines, evidence was also lacking for a benefit in screening women from 40 to 50 ”” unless they have a strong family history of breast cancer or a mutation in a gene called BRCA, which greatly increases the risk.

For women 50 to 70, Dr. Esserman said, the story is different. In that age range, there is good evidence that screening can reduce the risk of death from breast cancer by 20 percent to 30 percent.

Also, she said, women should try to get a sense of their own risk, and if it is high, talk to a doctor about taking tamoxifen or raloxifene, drugs that can lower the risk.

One risk factor is having dense breast tissue, which is a double threat: cancer is more likely and harder to detect, because X-rays do not penetrate this tissue as well as they pass through fat. The only way to find out whether you have dense breasts is with a mammogram, and the radiologist’s report should mention density, Dr. Esserman said. Patients may have to request the full report.

Other risk factors include taking hormones to treat menopause symptoms; having a history of biopsies, no pregnancies before 30, or a mother or sister with breast cancer; and aging.

A risk calculator for breast cancer, used by the National Cancer Institute, provides a score based on the answers to seven quick questions. But it’s only an estimate, and Dr. Susan Love, a breast surgeon and researcher in Santa Monica, Calif., cautions that the calculator is not so good at predicting individual risk. As for screening, Dr. Love praised Dr. Brawley and Dr. Esserman for questioning the status quo.

“Boy, everybody was afraid to go there, like it was the third rail,” she said, adding: “I really don’t think we should be routinely screening women under 50. There’s no data showing it works.”

Younger women, she said, are less likely to have cancer, and they tend to have dense breast tissue, so mammograms are more likely to miss tumors. For them, she said, “it’s radiation without much benefit.”

Dr. Love noted that not all medical groups agreed with the cancer society’s guidelines. Some recommend no screening for women under 50 or over 70, and some advise mammograms only every other year. In European countries that screen every other year, she said, the breast cancer death rates are no higher than in the United States.

She added that women from ages 50 to 70 should find out whether they have dense breasts, and those who do not could probably get by with less frequent mammograms.

But some researchers say that the benefits of yearly screening far outweigh the risks, and that if women skip it, gains against breast cancer ”” death rates have declined in recent years ”” could be undone.

Dr. Larry Norton, deputy physician in chief for breast cancer programs at Memorial Sloan-Kettering Cancer Center in Manhattan, said by e-mail: “Just because a test isn’t perfect is no reason to abandon it while better tests are being developed. The bottom line is that if an individual woman wants to reduce her odds of dying of breast cancer (by at least 24 percent, which is no small effect), then she should follow the current screening guidelines.”

Even if it were true that 1 in 3 cancers found by mammography would not become fatal (a figure that Dr. Norton questions), there is no sure way to tell which those are.

“And in the face of uncertainty, one must make rational choices,” he said. “Say someone fires a gun at you, and you know that there is a 30 percent chance that the bullet is a blank. Do you not still duck?”

Dr. Norton also emphasizes that finding tumors when small, which mammograms can do, increases the odds that the patient will be able to avoid mastectomy and chemotherapy.

But Dr. Silvia C. Formenti, the chairwoman of radiation oncology at New York University Langone Medical Center, said: “I don’t think there is enough debate. Screening does not pay off the way we expected.”

Dr. Formenti said she was concerned about finding tumors in older people that would probably not kill them. But the diagnosis turns them into cancer patients and erodes their peace of mind forever.

“We take away the innocence of being healthy and not having to worry about cancer,” she said. “The psychological cost of becoming a cancer patient is underrated.”

Dr. Formenti said the emphasis on screening by groups like the cancer society might have misled the public into thinking that screening could prevent cancer. “It’s a giant misconception,” she said.

Nonetheless, she said, “between 50 and 60 is a good time to be screened” ”” and women over 60 may still benefit, though the evidence is not as strong. But she emphasized that women of all ages needed to assess their risks when making decisions about being screened, and that all should have their breasts examined once a year by a doctor to check for lumps or other abnormalities. An experienced doctor can feel lumps one centimeter and larger, she said, noting that even masses as large as five centimeters can still be removed by lumpectomy ”” preserving the breast ”” and may not need chemotherapy.

“In a certain sense, I have to confess that I’m happy if the public gets offended or infuriated” by the debate, Dr. Formenti said. “I want taxpayers to say: ”˜You have no clarity. Study it. Stop telling us you are a good girl if you get a mammogram.’ ”

By the time I finished the interviews I decided that, because I’m between 50 and 60, I’ll keep having mammograms. But I’ve requested the report from my last one to find out about my tissue density, and if it’s low, I might stretch the interval to 18 months or even 2 years. And I’ll hope that in the meantime research does find a way to tell which tumors will kill you, and which will just sit there and mind their own business until you die of something else.