Dr. Weeks’ Comment:   I commend Dr. Dake for courage and innovation.  I am confident he conformed to clear informed consents and the work of Dr. Zamboni remains very encouraging to those with MS and their loved ones. 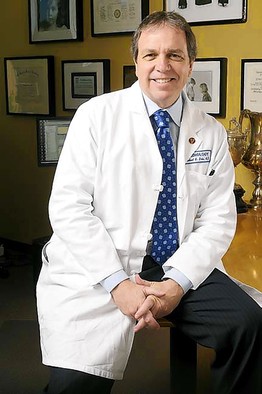 Stanford Office of Communication & Public AffairsMichael Dake is at the center of an uproar over a novel MS treatment.

But Dr. Dake’s experimenting touched off a furor at the university recently when””based on preliminary research by an Italian surgeon””he inserted metal stents into the internal jugular veins of multiple sclerosis patients. Doctors are generally allowed to adapt for new uses devices, like stents, that have received Food and Drug Administration approval.

In December, Dr. Dake’s 40-patient MS stenting program was shut down, according to Stanford officials. A number of patients treated by Dr. Dake had reported improvements in their symptoms following the procedure. However, one patient died of a brain hemorrhage on the way home from treatment and another had to undergo life-saving emergency surgery. Neurologists from Stanford and the University of California, San Francisco, had protested to Stanford medical school officials that the procedure was too untested to be used in people. It’s not clear which factors contributed to the program’s ending.

Philip A. Pizzo, the Stanford medical school dean, confirmed that after talking to the doctors involved in the matter, “it was decided there would not be further procedures.” But he said the vascular theory for MS shows enough promise to be studied further. He says he has asked Stanford doctors, including Dr. Dake and some of his critics, to collaborate on research into whether MS patients have a significantly higher rate of obstructions in their jugular veins than do people without the disease.

The controversy at Stanford illustrates the pressure that groups of patients can bring to bear on medical researchers looking into promising, but untested, cures for major illnesses. Internet chat rooms for MS patients last year were filled with comments about recent research by vascular surgeon Paolo Zamboni of the University of Ferrara, Italy. Dr. Zamboni’s findings””that blockages in the jugular veins were causing or worsening MS symptoms””have led to additional research at other universities in the U.S., as well as in Poland and Jordan. Hundreds of patients have signed up for imaging programs to measure jugular-vein blockages at various institutions, including State University of New York-Buffalo, Georgetown University and McMaster University in Canada.

Multiple sclerosis has confounded physicians since it was first described in 1868. In MS, the myelin sheath that insulates nerves disintegrates. It is generally thought of as an autoimmune disease, meaning a patient’s body attacks its own cells. Symptoms vary widely but often involve progressive muscle weakness and pain that can flare up unpredictably.

Decades of research have resulted in drugs like beta-interferon and, more recently, Tysabri, which ward off relapses in thousands of patients. But beta-interferon carries flu-like side effects and Tysabri has led to fatal brain disease in rare instances.

In late 2008, Dr. Zamboni reported his findings in a European medical journal. He theorized that blockages were causing changes in the brain that were triggering MS symptoms. If the veins could be opened, he and doctors at other institutions have suggested in scientific papers that perhaps the symptoms would cease.

He began treating patients with balloon angioplasty to prop open veins. In an interview, Dr. Zamboni says some patients had a “practically complete recovery” while more severely ill ones had “simple improvement in their quality of life.”

Joan Beal, a Los Angeles woman whose husband has MS, heard about Dr. Zamboni’s findings on the Internet and began hunting for a U.S. doctor who could perform the procedure. Adopting the chat room name Cheerleader, Ms. Beal became just that for Dr. Zamboni’s work. Her online postings helped fire up other patients to push for testing and treatment, patients say. Ms. Beal got in touch with a Stanford doctor and author, who referred her husband’s case to Dr. Dake.

Dr. Dake says he initially thought the idea was “wacky.” He says he changed his mind after reading more about Dr. Zamboni’s theory and started seeing MS patients Ms. Beal referred to him. Starting last summer, he used balloon angioplasty and stents to open up veins.

The first to get a stent was Ms. Beal’s husband, Jeff Beal, a composer for television and movies. After the procedure, Mr. Beal gave up his daily naps and was far more energetic and alert, his wife says. Some other patients tell similar stories. Randi Cohen says some of her MS symptoms, including fatigue, have significantly improved since Dr. Dake placed a stent in her jugular vein. “I never have to think about pacing myself” since having the stent installed, she says.

Some doctors say the procedure is highly experimental and the improvements reported by patients could simply be a placebo effect, since the course of the MS disease is so unpredictable. Stephen L. Hauser, chairman of neurology at UC, San Francisco, says it’s “extremely unlikely” any vascular cause, such as vein blockage, could be the main culprit in MS.

Dr. Dake responds that critical neurologists “don’t want to acknowledge that a vascular surgeon in Italy found something that’s been right under their noses.”

Complications in two cases undermined Dr. Dake’s efforts. One patient, Holly Shean from Prescott, Ariz., died of a brain hemorrhage on a flight home after treatment by Dr. Dake in August. Ms. Shean was treated with the blood-thinner Coumadin, which carries a bleeding risk, and had a stent installed in one jugular vein, and later in the other, according to her sister, Trudy Roughgarden. She says Ms. Shean, who used a wheelchair, “felt a little improvement in her fatigue level,” after treatment. There is no evidence that the stents contributed to the hemorrhage.

Later, a young scientist from Berkeley, Calif., who was a patient of Dr. Hauser’s, read about Dr. Dake’s work and had a stent put in, according to interviews with him, Dr. Hauser and Stanford doctors familiar with the case. The stent broke free, floated into the man’s heart and had to be removed with emergency surgery, these people say.

Dr. Dake says he had just seen Ms. Shean for a “follow-up visit” before she died on the plane home. He says he can’t discuss an individual patient’s care, due to rules governing patient confidentiality.

Dr. Dake says he was performing clinical work that he believed would help MS patients. He says such work is necessary before scientists can initiate a research program that would require formal oversight.

After meeting with the Stanford medical dean and Stanford lawyers, Dr. Dake says he stopped stenting MS patients in December. Now, he says, “I’m sort of viewed as the crazy uncle locked up in the woodshed out back.”