Dr. Weeks’ Comment: No one knows how they will react when faced with their mortality. 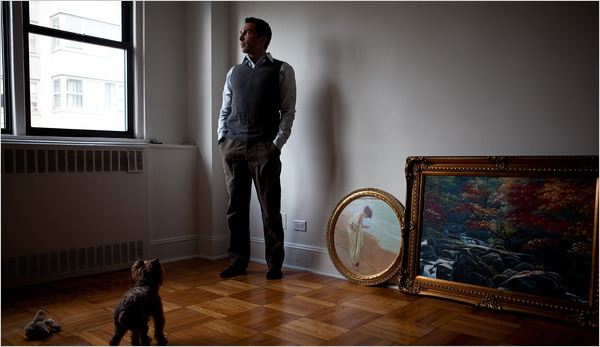 LAST MOMENTS Robert Pardi Jr. in the apartment he shared with his wife, who died in his arms. “I would have loved to say goodbye,” he said.

By the time she was 38, Dr. Desiree Pardi had become a leading practitioner in palliative care, one of the fastest-growing fields in medicine, counseling terminally ill patients on their choices.

A Switch in Roles

This series is examining the promises and challenges of extending, or ending, the lives of very ill patients.

More Articles in this Series » 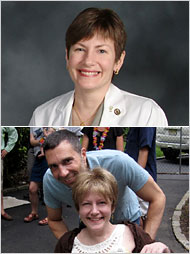 Dr. Desiree Pardi on duty, top, and with her husband about a month before she died.

She preached the gentle gospel of her profession, persuading patients to confront their illnesses and get their affairs in order and, above all, ensuring that their last weeks were not spent in unbearable pain. She was convinced that her own experience as a cancer survivor ”” the disease was first diagnosed when she was 31 ”” made her perfect for the job.

In 2008, while on vacation in Boston, she went to an emergency room with a fever. The next day, as the doctors began to understand the extent of her underlying cancer, “they asked me if I wanted palliative care to come and see me.”

She angrily refused. She had been telling other people to let go. But faced with that thought herself, at the age of 40, she wanted to fight on.

While she and her colleagues had been trained to talk about accepting death, and making it as comfortable as possible, she wanted to try treatments even if they were painful and offered only a 2 percent chance of survival. When the usual cycles of chemotherapy failed to slow the cancer, she found a doctor who would bombard her with more. She force-fed herself through a catheter and drank heavy milkshakes to keep up her weight.

Over the last decade, palliative care has become standard practice in hospitals across the country. Born out of a backlash against the highly medicalized death that had become prevalent in American hospitals, it stresses the relief of pain; thinking realistically about goals; and recognizing that, after a certain point, aggressive treatment may prevent patients from enjoying what life they had left.

Dr. Pardi had gone into the field because she thought her experience as a patient would make her a better doctor. Now she came face to face with all the ambiguities of death, and of her profession.

She remembered patients who complained to her that she did not know them well enough to recognize that they were stronger than she had thought. Now she discovered that she felt the same way about her own doctors. “I think they underestimated me,” she said in an interview last summer.

She came to question the advice she had been giving. She thought about quitting. “I just decided I have to believe in what I’m saying,” she said.

Desiree Dougherty was the overachiever of a modest family, the daughter of a sheet-metal worker and foreman and a nurse in Rockland County, about 30 miles north of New York City. She was 5-foot-1, with a wide, warm smile, a cascade of blond hair, blue eyes and a figure that turned heads. She loved the color green; Pink Floyd; and sentimental books and movies, like Richard Bach’s novel “One,” about life’s choices, and “Pretty Woman.”

She met her future husband, Robert Pardi Jr., on her first day of college at Stony Brook University. She wanted to be a doctor; he wanted to make money. “She was a hippie chick with blue eyeliner,” her husband recalled of those carefree days, “a far cry from the Ann Taylor woman she would later become.”

She began an M.D.-Ph.D. program at Mount Sinai School of Medicine in Manhattan at age 24. In 1998, she was halfway through when she decided to take a few months off to join her husband in the United Arab Emirates, where he was working as a portfolio manager.

She needed a routine health screening to obtain a visa to remain in the country, and opted for a more thorough exam. At the hospital in Dubai, she later explained, the custom was for doctors to talk to the husband, even when the wife was the patient.

So her husband came home early one afternoon, and instead of taking her out for Turkish coffee and sweets, sat her down and said, “I’m afraid it was bad news.” Further tests showed she had breast cancer. She had just turned 31.

She discovered that she liked having her husband act as a buffer between her and her doctors. From then on, even when she was in the United States, her doctors were told that they should communicate only with him.

She light-heartedly called herself “the Queen of Denial,” because she did not want to know anything about her disease. Her husband gave her just enough information to enable her to make decisions, and she always chose the most aggressive treatment. When a doctor in Dubai suggested she wait a bit before getting a mastectomy, she would not hear it. “Off, I want it off!” she insisted.

After the mastectomy and months of chemotherapy, she was told the cancer was gone. Determined to try anything that might prevent a recurrence, she underwent a stem-cell transplant in 1999, before they were found to be ineffective for breast cancer. She had her other breast removed protectively, though her double-D figure had been a source of pride.

She graduated from medical school in 2002, and was invited to appear on a segment of “The Oprah Winfrey Show” about people who had overcome obstacles and graduated. She was tongue-tied, but expressed her joy by throwing her arms around a startled Ms. Winfrey.

She did her residency at NewYork-Presbyterian/Weill Cornell Medical Center, where her mentor, Dr. Mark Pecker, said she had among the highest medical board scores he had ever seen.

Then what she had been dreading happened. During her residency, her cancer returned, invading her liver, and she was treated with drugs and surgery. Even after that, she was never fully in remission.

When it came time to choose a specialty, she was drawn to oncology and psychiatry, but thought palliative care was a good compromise. During one hospitalization at NewYork-Presbyterian, she had asked for intravenous Dilaudid, a strong opioid, for “10 out of 10” pain. She was labeled a “drug seeker” by the medical staff, she said ”” perhaps because she was asking for the drug by name ”” as if she were an addict craving crack. It was a revelation that would lead her toward palliative care: that treating the pain was as important as treating the sickness.