Dr. Weeks’ Comment:   Chocolate is excellent as a health food… but not the type that has milk and sugar added! 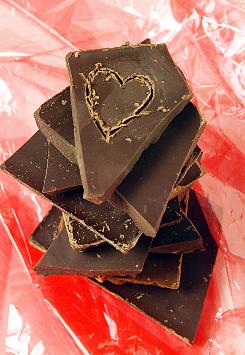 Dark chocolate is rich in antioxidants and flavonols.

LONDON (AP) ”” The Easter Bunny might lower your chances of having a heart problem. According to a new study, small doses of chocolate every day could decrease your risk of having a heart attack or stroke by nearly 40%.

They found people who had an average of six grams of chocolate per day ”” or about one square of a chocolate bar ”” had a 39% lower risk of either a heart attack or stroke. The study is scheduled to be published Wednesday in the European Heart Journal.

Previous studies have suggested dark chocolate in small amounts could be good for you, but this is the first study to track its effects over such a long period of time. Experts think the flavonols contained in chocolate are responsible. Flavonols, also found in vegetables and red wine, help the muscles in blood vessels widen, which leads to a drop in blood pressure.

“It’s a bit too early to come up with recommendations that people should eat more chocolate, but if people replace sugar or high-fat snacks with a little piece of dark chocolate, that might help,” said Brian Buijsse, a nutritional epidemiologist at the German Institute of Human Nutrition in Nuthetal, Germany, the study’s lead author.

The people tracked by Buijsse and colleagues had no history of heart problems, had similar habits for risk factors like smoking and exercise, and did not vary widely in their

Since the study only observed people and did not give them chocolate directly to test what its effects were, experts said more research was needed to determine the candy’s exact impact on the body. The study was paid for by the German government and the European Union.

Doctors also warned that eating large amounts of chocolate could lead to weight gain, a major risk factor for heart problems and strokes.

“This is not a prescription to eat more chocolate,” said Dr. Robert Eckel, a professor of medicine at the University of Colorado and a past president of the American Heart Association. He was not linked to the study. “If we all had (a small amount) of chocolate every day for the rest of our lives, we would all gain a few pounds.”

Eckel said it was amazing to find such a small amount of chocolate could have such a protective effect, but that more studies needed to be done to confirm its conclusions.

Alice Lichtenstein, a nutritionist at Tufts University School of Medicine, said it was difficult to link the reduction in heart disease and stroke risk to the chocolate alone, since there may have been other differences between the study participants.

“The relationship between chocolate and good health outcomes is still uncertain,” she said. “If somebody really enjoys eating chocolate, then they should have a small amount of that and just really enjoy it,” she said.