Dr. Weeks’ Comment:   Stress creates adrenalin and prolonged unremitting stress, causes excessive adrenalin which, if not safely metabolized, will be oxidized by the human in order to shut off the “rocket fuel” there by feeling less “stress”.  The trouble is,  as Hoffer, Osmond and Smythies demonstrated in the early 1950’s, oxidized adrenalin is a naturally occurring hallucinogen.  (Ask the doctor prescribing your anti-psychitic or anti-manic drugs if he or she knew this biochemical fact!)    This is why Strattera, pharmaceutical “speed”  causes hallucinations https://weeksmd.com/?p=1155 and why glutathione and other antioxidants  reduce  hallucinations  https://weeksmd.com/?p=458

Therefore, call it what you will – “psychosis NOS”,  “paranoid schizophrenia”, ” schizo-affective disorder”, “mania” or “bipolar type 1 or 2” –   the really helpful term is the old fashioned term, a “breakdown”, plain and simple. What broke?  The health metabolism of adrenalin.  What is the craziness? It is a biochemical consequence of excess oxidized adrenalin: the  “adrenochrome” which distorts visual, auditory and cognitive stimuli.  How are these breakdowns remedied?

Mental health is restored by  1) a number of lifestyle factors all designed to reduce stress (and thereby reduce adrenalin and its toxic metabolite adrenochrome,  and  2) niacin or niacinamide (methyl acceptors which reduce the conversion of noradrenalin to adrenalin) and 3) vitamin C (the antioxidant which serves to inhibit the oxidation from adrenalin to the toxic  oxidation product: adrenochrome).

On the Verge of ”˜Vital Exhaustion’? 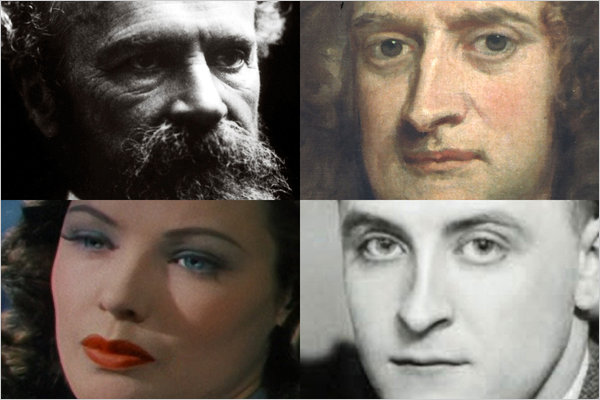 SUFFERERS ALL Clockwise from top left, William James, Isaac Newton, F. Scott Fitzgerald and Gene Tierney are among the well-known people said to have had a nervous breakdown, or something like it, during their lives.

Decades ago modern medicine all but stamped out the nervous breakdown, hitting it with a combination of new diagnoses, new psychiatric drugs and a strong dose of professional scorn. The phrase was overused and near meaningless, a self-serving term from an era unwilling to talk about mental distress openly.

But like a stubborn virus, the phrase has mutated.

In recent years, psychiatrists in Europe have been diagnosing what they call “burnout syndrome,” the signs of which include “vital exhaustion.” A paper published last year defined three types: “frenetic,” “underchallenged,” and “worn out” (“exasperated” and “bitter” did not make the cut).

This is the latest umbrella term for the kind of emotional collapses that have plagued humanity for ages, stemming at times from severe mental difficulties and more often from mild ones. There have been plenty of others. In the early decades of the 20th century, many people simply referred to a crackup, including “The Crack-Up,” F. Scott Fitzgerald‘s 1936 collection of essays describing his own. And before that there was neurasthenia, a widely diagnosed and undefined nerve affliction causing just about any symptom people cared to add.

Yet medical historians say that, for versatility and descriptive power, it may be hard to improve upon the “nervous breakdown.” Coined around 1900, the phrase peaked in usage during the middle of the 20th century and echoes still. One recent study found that 26 percent of respondents to a national survey in 1996 reported that they had experienced an “impending nervous breakdown,” compared with 19 percent from the same survey in 1957.

“ ”˜Nervous breakdown’ is one of those sturdy old terms, like ”˜melancholia’ and ”˜nervous illness,’ that haven’t really been surpassed, although they sound antiquated,” the historian Edward Shorter, co-author with Max Fink of the book “Endocrine Psychiatry: Solving the Riddle of Melancholia,” said in an e-mail message.

Never a proper psychiatric diagnosis, the phrase always struck most doctors as inexact, pseudoscientific and often misleading. But those were precisely the qualities that gave it such a lasting place in the popular culture, some scholars say. “It had just enough medical sanction to be useful, but did not depend on medical sanction to be used,” said Peter N. Stearns, a historian at George Mason University near Washington, D.C.

A nervous breakdown was no small thing in the 1950s or ’60s, at least by the time a person arrived at a doctor’s office. Psychiatrists today say that, most often, it was code for an episode of severe depression ”” or psychosis, the delusions that often signal schizophrenia.

“I don’t remember people who got that label ever using it as their own complaint ”” it was very much stigmatized,” said Dr. Nada L. Stotland, a former president of the American Psychiatric Association and a professor at Rush Medical College in Chicago, who began practicing in the 1960s. “Whether it was ”˜nervous exhaustion’ or ”˜nervous breakdown,’ anything that sounded psychiatric was stigmatized at that time. It was shameful, humiliating.”

The vagueness of the phrase made it impossible to survey the prevalence of any specific mental problem: It could mean anything from depression to mania or drunkenness; it might be the cause of a bitter divorce or the result of a split. And glossing over those details left people who suffered from what are now well-known afflictions, like postpartum depression, entirely in the dark, wondering if they were alone in their misery.

But that same imprecision allowed the speaker, not medical professionals, to control its meaning. People might be on the verge of, or close to, a nervous breakdown; and it was common enough to have had “something like” a nervous breakdown, or a mild one. The phrase allowed a person to disclose as much, or as little, detail about a “crackup” as he or she saw fit. Vagueness preserves privacy.

Dr. Shorter said that the term “nervous” has traditionally been a “weasel word” for mental troubles, implying that the cause was something physical beyond the person’s control ”” their damaged nerves, not their mind. And a breakdown, after all, is something that happens to cars. It’s a temporary problem; or at least, not necessarily chronic.

Through the ages, every generation has attributed its own catchall diagnosis to larger cultural changes. Industrialization. Modernization. The digital age. The 19th-century philosopher William James reportedly called neurasthenia, from which he claimed to suffer himself, “Americanitis,” in part the result of the accelerating pace of American life. So it was with breakdowns. The causes were largely external ”” and recovery a matter of better managing life’s demands.

“People accepted the notion of nervous breakdown often because it was construed as a category that could handled without professional help,” concluded a 2000 analysis by Dr. Stearns, Megan Barke and Rebecca Fribush. The popularity of the phrase, they wrote, revealed “a longstanding need to keep some distance from purely professional diagnoses and treatments.”

Many did just that, and returned to work and family. Others did not. They needed a more specific diagnosis, and targeted treatment. By the 1970s, more psychiatric drugs were available, and doctors directly attacked the idea that people could effectively manage breakdowns on their own.

Psychiatrists proceeded to slice problems like depression and anxiety into dozens of categories, and public perceptions shifted, too. In 1976, 26 percent of people admitted seeking professional help, up from 14 percent in 1947, according to Dr. Stearns’s analysis. And “nervous breakdown” began to fade from use.

The same fate may or may not await “burnout syndrome,” which for now has backing from some doctors and medical researchers. But it has another 30 years to outlast the classic “breakdown.”