Questions About Cellphones and Brain Tumors 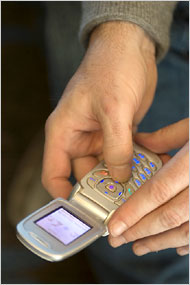 A long-awaited study of cellphone use and brain health has finally been released, but the data are raising more questions than answers.

The report is called Interphone, a 13-country study that amounts to the largest and longest study of whether extensive cellphone use increases risk for brain tumors. The study results, published in The International Journal of Epidemiology, were delayed by four years, reportedly after researchers disagreed over how to present the results.

The final paper states that overall there is no link between cellphone use and brain tumors. However, the investigators report that study participants with the highest level of cellphone use had a 40 percent higher risk for a type of brain tumor called a glioma. However, that risk is discounted because of potential “biases and errors” that “prevent a causal interpretation,” the investigators wrote.

In a press release accompanying the study, Christopher P. Wild, director of the International Agency for Research on Cancer, said:

To study the relationship between cellphones and brain tumors, the Interphone researchers gathered data on 2,708 cases of glioma and 2,409 of meningioma, another type of brain tumor, and matched them against about 5,600 controls. They tracked the cellphone habits and health of all the people in the study in an effort to ascertain whether cellphone use was associated with a higher risk for brain tumors. The $25 million study, which began in 2000, was funded primarily by the European Commission and the cellphone industry.

Although earlier studies have found no link between cellphones and brain tumors, that research has been criticized for being too short in duration to detect any trends. The brain tumor-cellphone link has been dismissed by a number of health groups, including the U.S Food and Drug Administration and the American Cancer Society.

But researchers who have raised concerns have focused on the heat generated by cellphones and the fact that the radio frequencies are absorbed mostly by the head and neck. In observational studies that suggest a risk, the tumors tend to occur on the same side of the head where the patient typically holds the phone.

So what does the Interphone data add to the debate? Louis Slesin, the editor of Microwave News, has been following the research on cellphones and cancer for years and notes that despite the downplaying of the results, “at the very least, the risks are greater than many believed only a few years ago.” He writes:

In a series of interviews, a number of the members of the Interphone project told Microwave News that they now see the risk among long-term users as being larger than when the study began. Some think the risk warrants serious attention.

“To me, there’s certainly smoke there,” said Elisabeth Cardis, who leads the Interphone project. “Overall, my opinion is that the results show a real effect.” Dr. Cardis is with the Center for Research in Environmental Epidemiology in Barcelona. She moved there two years ago after working on Interphone at IARC for close to a decade.

“There is evidence that there may be a risk; Interphone has made that a little stronger,” said Bruce Armstrong of the University of Sydney, another member of Interphone. “It shows some indication of an increased risk of gliomas, but I cannot say this with certainty.” (A glioma is a type of brain tumor.)

Siegal Sadetzki, the Israeli member of Interphone, goes further. She pointed out that while the risks are inconclusive, a number of the results show some consistency. These include increased risks among the heaviest users, the fact that the risks were highest on the side of the head the phone was usually used and that the tumors were in the temporal lobe of the brain, which is closest to the ear. Sadetzki is with the Gertner Institute outside Tel Aviv. “The data are not strong enough for a causal interpretation, but they are sufficient to support precautionary policies,” she said.

To learn more, read the full, detailed analysis from Microwave News. And for more information about research on cellphones and cancer, read my Well column on the topic, “Experts Revive Debate Over Cellphones and Cancer.”

And to see how various news organizations and trade groups have reported on the story, go to the Microwave News Interphone Resources page.