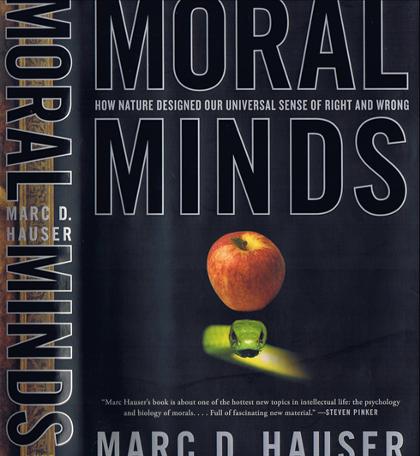 Detail of the cover of Marc Hauser’s 2006 book, Moral Minds: How Nature Designed Our Universal Sense of Right and Wrong
`

Earlier this month, the Boston Globe reported that Hauser, 50, the author of Moral minds: How nature designed a universal sense of right and wrong, a noted researcher in the roots of animal cognition, had been placed on leave following accusations by his students that he had purposely fabricated data in his research. His work relied on observing responses by tamarin monkeys to stimuli such as changes in sound patterns, claiming they possessed thinking skills often viewed as unique to humans and apes.

In a letter sent to Harvard faculty today, dean Michael Smith confirms a university investigation found “eight instances of scientific misconduct” by Hauser. A research paper has been retracted as a result of the finding, another corrected, and a Science paper has a correction under discussion; “five other cases” were also investigated, according to the letter.

In response to a request for comment, Hauser sent the following Friday evening:

I am deeply sorry for the problems this case has caused to my students, my colleagues, and my university..

I acknowledge that I made some significant mistakes and I am deeply disappointed that this has led to a retraction and two corrections. I also feel terrible about the concerns regarding the other five cases, which involved either unpublished work or studies in which the record was corrected before submission for publication.

I hope that the scientific community will now wait for the federal investigative agencies to make their final conclusions based on the material that they have available.

I have learned a great deal from this process and have made many changes in my own approach to research and in my lab’s research practices.

Research and teaching are my passion. After taking some time off, I look forward to getting back to my work, mindful of what I have learned in this case. This has been painful for me and those who have been associated with the work.

Hauser’s work looked for the evolutionary roots of moral behavior in the responses of cotton-top tamarins to teasing by researchers. His next planned book is Evilicious: explaining our evolved taste for being bad, according to his website.

“It is good that Harvard now confirms the rumors, so that there is no doubt that they found actual scientific misconduct, and that they will take appropriate action,” says Emory University primate researcher Frans de Waal. “But it leaves open whether we in the field of animal behavior should just worry about those three articles or about many more, and then there are also publications related to language and morality that include data that are now in question. From my reading of the dean’s letter, it seems that all data produced by this lab over the years are potentially in question.”

Because federal funding supported Hauser’s lab, the investigation was turned over to research agency officials as well as the U.S. Attorney’s Office for the District of Massachusetts, Smith says, as the university considers its own sanctions in the case. “The response of the accused to this report and the report itself are considered by the dean, who then decides whether to accept the findings, and in the case of a finding of misconduct, determine the sanctions that are appropriate,” he says.

Says de Waal, by email: “Another more sensitive issue is, how many people knew about the misconduct, or how many could have known about or suspected it? Advisors, students, postdocs, close colleagues? Was the scientist solely responsible, as the dean claims, or is there more to worry about? For the moment the fairest assumption is that no one else is to blame, and certainly the students who exposed the misconduct deserve praise.”

“Dishonesty in cognitive science is somehow more disturbing than dishonesty in biology or physical science,” said psychologist David Premack, an emeritus professor of the University of Pennsylvania, in an email to USA TODAY. “The latter threatens the lives of people, producing a kind of harm we readily comprehend. The former puzzles us: it produces no physical harm, but threatens our standards, a kind of harm we do not readily understand. Because he caused no physical harm, we see him as discrediting everything he touched, including science itself. Hauser, a gifted writer, had no need for shortcuts.”

Here is the text of the Harvard letter:

No dean wants to see a member of the faculty found responsible for scientific misconduct, for such misconduct strikes at the core of our academic values. Thus, it is with great sadness that I confirm that Professor Marc Hauser was found solely responsible, after a thorough investigation by a faculty investigating committee, for eight instances of scientific misconduct under FAS standards. The investigation was governed by our long-standing policies on professional conduct and shaped by the regulations of federal funding agencies. After careful review of the investigating committee’s confidential report and opportunities for Professor Hauser to respond, I accepted the committee’s findings and immediately moved to fulfill our obligations to the funding agencies and scientific community and to impose appropriate sanctions.

Harvard, like every major research institution, takes a finding of scientific misconduct extremely seriously and imposes consequential sanctions on individuals found to have committed scientific misconduct. Rigid adherence to the scientific method and scrupulous attention to the integrity of research results are values we expect in every one of our faculty, students, and staff.

Since some of the research in the current case was supported by federal funds, the investigating committee’s report and other supplemental material were submitted to the federal offices responsible for their own review, in accordance with federal regulations and FAS procedures. Our usual practice is not to publicly comment on such cases, one reason being to ensure the integrity of the government’s review processes.

A key obligation in a scientific misconduct case is to correct any affected publications, and our confidentiality policies do not conflict with this obligation. In this case, after accepting the findings of the committee, I immediately moved to have the record corrected for those papers that were called into question by the investigation. The committee’s report indicated that three publications needed to be corrected or retracted, and this is now a matter of public record. To date, the paper, “Rule learning by cotton-top tamarins,” Cognition 86, B15-B22 (2002) has been retracted because the data produced in the published experiments did not support the published findings; and a correction was published to the paper, “Rhesus monkeys correctly read the goal-relevant gestures of a human agent,” Proceedings of the Royal Society B 274, 1913-1918 (2007). The authors continue to work with the editors of the third publication, “The perception of rational, goal-directed action in nonhuman primates,” Science 317, 1402-1405 (2007). As we reported to one of these editors, the investigating committee found problems with respect to the three publications mentioned previously, and five other studies that either did not result in publications or where the problems were corrected prior to publication. While different issues were detected for the studies reviewed, overall, the experiments reported were designed and conducted, but there were problems involving data acquisition, data analysis, data retention, and the reporting of research methodologies and results.

Beyond these responsibilities to the funding agencies and the scientific community, Harvard considers confidential the specific sanctions applied to anyone found responsible for scientific misconduct. However, to enlighten those unfamiliar with the available sanctions, options in findings of scientific misconduct include involuntary leave, the imposition of additional oversight on a faculty member’s research lab, and appropriately severe restrictions on a faculty member’s ability to apply for research grants, to admit graduate students, and to supervise undergraduate research. To ensure compliance with the imposed sanctions, those within Harvard with oversight of the affected activities are informed of the sanctions that fall within their administrative responsibilities.

As should be clear from this letter, I have a deeply rooted faith in our process and the shared values upon which it is founded. Nonetheless, it is healthy to review periodically our long-standing practices. Consequently, I will form a faculty committee this fall to reaffirm or recommend changes to the communication and confidentiality practices associated with the conclusion of cases involving allegations of professional misconduct. To be clear, I will ask the committee to consider our policies covering all professional misconduct cases and not comment solely on the current scientific misconduct case.

In summary, Harvard has completed its investigation of the several allegations in the current case and does not anticipate making any additional findings, statements, or corrections to the scientific record with respect to those allegations. This does not mean, however, that others outside Harvard have completed their reviews. In particular, Harvard continues to cooperate with all federal inquiries into this matter by the PHS Office of Research Integrity, the NSF Office of Inspector General and the U.S. Attorney’s Office for the District of Massachusetts.

Dean of the Faculty of Arts and Sciences.