Dr. Weeks’  Comment:   I have long taught that all plants are health giving (in the right dosage!) since a plant would not be able to survive on earth if it didn’t possess anti-viral (think bioflavanoids),  anti-oxidant (beta-carotenoids) and anti-cancer (mistletoe, black raspberries, spurge) properties.

Enjoy the “news” below: 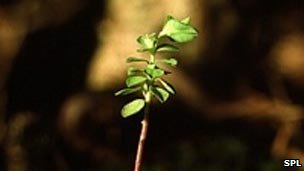 Sap from the common garden weed petty spurge appears to treat non-melanoma skin cancers, experts are reporting in the British Journal of Dermatology.

But they tell patients not to “try it at home” since the treatment is still experimental and can irritate the skin.

Although not the most serious form of skin cancer, non-melanoma lesions are very common, accounting for a third of all cancers detected in the UK.

Most cases of non-melanoma skin cancer can be easily treated and cured with surgical removal or freezing, or using a special kind of light therapy that kills the cancer cells.

This is a very small test group so it will be interesting to see what larger studies and the development of the active ingredient in E. peplus sap will reveal”

End Quote Kimberley Carter of the British Association of Dermatologists

However, for some people these treatments will fail or are not deemed suitable.

The study involved 36 of such patients who collectively had a total of 48 non-melanoma lesions.

Each was treated with the sap of the petty spurge plant, or Euphorbia peplus, which was applied to the skin once a day for three days.

The plant sap has been used for centuries as a traditional medicine, and the researchers wanted to put it through its paces in a proper clinical trial.

After a one month, 41 of the 48 cancers had shown a complete clinical response to the treatment, meaning no trace of the tumour could be found on clinical examination.

Patients who experienced only a partial response to the first round of treatment were then offered a second course.

The lesions which responded positively to one or two courses of treatment were then followed up further for between two and 31 months. .

After an average of 15 months following treatment, two thirds (68.5% or 30 of the 48) of the skin cancer lesions were still showing a complete response.

The researchers say large-scale studies are now needed to test the active ingredient in the weed’s sap, a substance called Ingenol mebutate, as a potential new treatment option.

Studies show that when Ingenol mebutate is applied to the skin it not only kills the cancerous cells but also recruits white blood cells known as neutrophils that appear to reduce the risk of relapse by destroying any residual malignant cells that could allow the tumour to re-grow.

Kimberley Carter of the British Association of Dermatologists said: “This is a very small test group so it will be interesting to see what larger studies and the development of the active ingredient in E. peplus sap will reveal.

“Whilst it would not provide an alternative to surgery for the more invasive skin cancers or melanoma, in the future it might become a useful addition to the treatments available to patients for superficial, non-melanoma skin cancers.

“Any advances that could lead to new therapies for patients where surgery is not an option are definitely worth investigating.

“It is also very important to note that this is definitely not a treatment people should be trying out at home.

“Exposure of the sap to mucous producing surfaces, such as the eyes, results in extreme inflammation and can lead to hospitalisation.”

Cancer Research UK said that people with suspect skin lesions should continue to see doctors who can advise the best treatment.

More on This Story