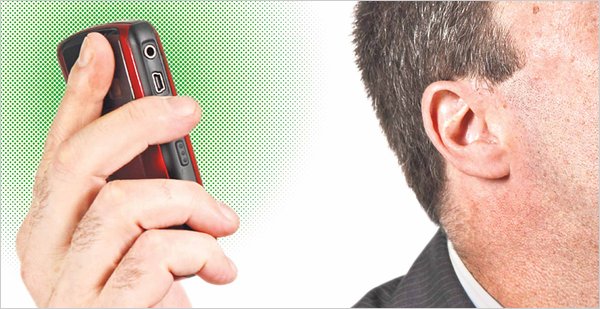 Illustration by The New York Times

In a culture where people cradle their cellphones next to their heads with the same constancy and affection that toddlers hold their security blankets, it was unsettling last month when a study published in The Journal of the American Medical Association indicated that doing so could alter brain activity.

The report said it was unclear whether the changes in the brain ”” an increase in glucose metabolism after using the phone for less than an hour ”” had any negative health or behavioral effects. But it has many people wondering what they can do to protect themselves short of (gasp) using a landline.

Yet, in light of her findings, she advises users to keep cellphones at a distance by putting them on speaker mode or using a wired headset whenever possible. The next best option is a wireless Bluetooth headset or earpiece, which emit radiation at far lower levels. If a headset isn’t feasible, holding your phone just slightly away from your ear can make a big difference; the intensity of radiation diminishes sharply with distance. “Every millimeter counts,” said Louis Slesin, editor of Microwave News, an online newsletter covering health and safety issues related to exposure to electromagnetic radiation.

So crushing your cellphone into your ear to hear better in a crowded bar is probably a bad idea. Go outside if you have to take or make a call. And you might not want to put your cellphone in your breast or pants pocket either, because that also puts it right up against your body. Carry it in a purse or briefcase or get a nonmetallic belt clip that orients it away from your body.

Some studies have suggested a link between cellphone use and cancer, lower bone density and infertility in men. But other studies show no effect at all. Given the mixed messages and continuing research, Robert Kenny, a Federal Communications Commission spokesman, said in an e-mail, “As always, we will continue to study this issue and coordinate with our federal partners.”

The phone used in Dr. Volkow’s study was a Samsung Knack, model SCH-U310, a flip phone that was in wide use when she began planning her experiments two and half years ago. But today’s ubiquitous smartphones emit even more radiation as they transmit more, and more complex, data.

You can get an idea of the relative amounts of radiation various cellphone models emit by looking at their SAR, or Specific Absorption Rate. This number indicates how much radiation is absorbed by the body when using the handset at maximum power. A cellphone cannot be sold in the United States unless an F.C.C.-approved laboratory says its SAR is below 1.6 watts per kilogram. In Europe, the maximum is 2 watts per kilogram.

The SAR number is not displayed when you compare cellphones at your local wireless store, and trying to find it in the fine print of your user manual is an exercise in frustration. The F.C.C. maintains that SAR values “do not provide sufficient information” to reliably compare cellphone radiation emissions because certain phones might rarely operate at maximum power. Still, the Environmental Working Group, a nonprofit organization, has a comprehensive list of the SAR values for most cellphones available from major carriers on its Web site. (For instance, the Apple iPhone 4 is listed at 1.17 watts per kilogram, the Motorola Droid at 1.5 and the LG Quantum at 0.35.)

But more important than looking for a low-SAR phone is how you use it. Many cellphones emit the most radiation when they initially establish contact with the cell tower, making their “digital handshake.” To reduce exposure it’s best to wait until after your call has been connected to put your cellphone next to your ear.

During the ensuing conversation, it’s advisable to tilt the phone away from your ear when you are talking and only bring it in close to your ear when you are listening. That bit of teeter-totter works because the emission of radiation is “significantly less when a cellphone is receiving signals than when it is transmitting,” said Lin Zhong, assistant professor of electrical and computer engineering at Rice University in Houston.

Moreover, your cellphone emits less when you are stationary because when you are moving rapidly ”” say, in a car or train ”” it must repeatedly issue little bursts of radiation to make digital handshakes with different towers as it moves in and out of range. (More cause to hang up when you buckle up.)

Want another reason to complain about your carrier’s poor coverage? Any situation where your cellphone has a weak signal indicates it has to work harder and thus will emit more radiation. “Fewer bars means more radiation,” said Om Gandhi, professor of electrical engineering at the University of Utah in Salt Lake City. Inside buildings and elevators, in rural areas, the Grand Canyon ”” these are not good places to make a call if you’re trying to reduce your exposure to radiation.

Of course, parents using their iPhones to pacify cranky kids might want to reconsider rattles. Children’s developing brains and tissues are thought to be most vulnerable to cellphone radiation. Health authorities in Britain, France, Germany and Russia have all issued warnings against allowing small children to use cellphones for extended periods, if at all.

There are cellphone attachments that purport to shield users from radiation, and most are “hoaxes,” said Mr. Gandhi. Beware of pendants that sellers claim snatch radiation from the air. Pong Research offers a cellphone case for iPhones and BlackBerrys that it says has been shown by an F.C.C.-approved testing lab to redirect radiation from the phone’s antenna away from the head.

While the manufacturer says it reduces radiation more than 60 percent, some electrical engineering experts question whether the case may have the opposite effect at orientations where your head is in the way of the cell tower because your phone may have to increase its transmission strength somewhat to compensate for the redirected signal. The company disputes this. Nevertheless, the net effect of using the device throughout the course of the day may be a reduction in total exposure.

That is, if you don’t rest your cellphone against your body while typing out your message.