Dr. Weeks’ Comment:  It has never been ‘what you eat” that determines your heath…  at best it is what you absorb from what you eat and what can be circulated around your body so as to be delivered to cells in need which counts more than just what you swallow.  Nanotechnology is helping “introduce” nutrients to the needy cells.  Read on! 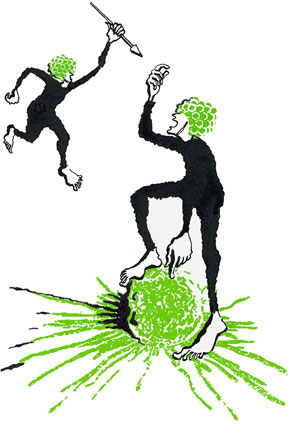 FOR decades doctors have attacked cancer with drugs that kill malignant cells. Unfortunately, such chemotherapy kills a lot of healthy cells as well. In recent years, the use of drug-carrying particles a few nanometres across has improved matters. Such particles can be tailored to release their payloads only when the surrounding environment indicates that they are near a tumour, thus reducing collateral damage. Even that, however, has not proved perfect. Typically, only about 1% of the drugs packaged up in nanoparticles this way make it to their destination.

Sangeeta Bhatia and Geoffrey von Maltzahn of the Massachusetts Institute of Technology, however, hope to change that. As they report in Nature Materials, they believe that by granting nanoparticles the ability to communicate with one another, the success of drug delivery can be increased 40-fold. They were inspired by one of the body’s natural communications systems: the way that injured tissue calls for help to stem bleeding. They wondered if they might be able to piggyback on this system to deliver drugs to tumours””and they found that they could.

When the body sustains an injury, molecules called notification proteins are produced at the site. These proteins communicate with clotting agents in the blood. They round up cellular fragments known as platelets, along with molecules of a soluble protein called fibrinogen, both of which circulate in the bloodstream. The fibrinogen turns into fibrin, an insoluble, filamentous protein which traps the platelets and causes them to link up into a quilt that helps stop bleeding.

For the signalling nanoparticles the team used tiny golden rods. These tend to collect at the locations of tumours because the blood vessels which serve tumours often have unusual pores in them. These pores are between 100 and 200 nanometres in diameter””perfect for trapping the rods and thus marking the tumour. Once the rods were in place, the team fired a burst of laser light in the general location of the tumour. This light was tuned to be absorbed by gold and was thus converted into heat only in places where the rods had accumulated. That damaged the surrounding tissue enough to activate the coagulation system.

The clever bit was that the receiving nanoparticles, which carried the pharmaceutical payload, were doped with protein fragments that bind to fibrin””and thus to the wound-stanching quilts that form when the heat from the gold nanorods does its work. Only then do the nanoparticles release their cargo. The result, Dr Bhatia and Dr von Maltzahn report, is a delivery system that is 40 times more effective than using nanoparticles by themselves. Moreover, in mice at least, this approach shrinks cancers more effectively than other nanoparticle-based treatments. Work to evaluate the treatment in human patients should follow soon.