Dr.  Weeks’ Comment:  Here we see an intelligent and appropriate use of non-violent demonstration and the reclaiming our civil liberties.  I applaud this Senator.  If I were also a man of leisure on the public dole I too would stick around “until they got tired of me….”  The last time I was patted down by a TSA agent (since I NEVER go into the X ray machines!) I had a brief conversation and the TSA agent himself admitted the whole screening was a facade.  He said: “If someone wanted to by-pass it, they could just go via the cargo floor.”   The TSA is a show of force to calm the masses but it serves to valid security purpose.   We are giving away all our rights which our ancestors fought and died for! 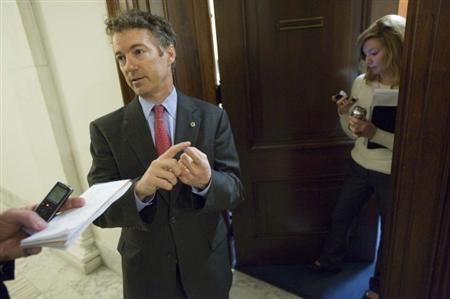 By Thomas Ferraro and John Crawley

(Reuters) – Republican Senator Rand Paul was stopped at an airport on Monday for triggering an alarm and refusing a patdown, prompting his father, U.S. presidential candidate Ron Paul, to accuse security officials of being part of an out-of-control “police state.”

The Transportation Security Administration, which handles security at U.S. airports, has sparked an outcry in recent years with its policies, including full-body imaging and patdowns that have been called invasive.

Rand Paul told Reuters he was detained after objecting to the physical search on privacy grounds, a charge the TSA denied.

As favourites of the anti-Washington Tea Party movement, Paul and his father, who is a Republican U.S. representative from Texas, have helped lead the charge against what critics call excessive federal intrusion, from healthcare to body searches.

In a harshly worded attack on the TSA, Ron Paul, known for his libertarian views, said the agency “gropes and grabs our kids and our seniors and does nothing to keep us safe.”

“The police state in this country is growing out of control,” he said in a statement.

The TSA said that after Rand Paul refused the patdown, he was escorted out of the airport security area in Nashville, Tennessee. Paul missed his flight to Washington but was later rebooked and rescreened without incident, it said.

Paul, a strong critic of the TSA, said officials told him his knee had triggered an alarm in a walk-in scanner and rebuffed his request to be rescreened.

When he refused a physical search, “I wasn’t allowed to leave until they got tired of me,” he said.

“I’m not against the rules. I just think they need to have common sense,” Paul said.

The TSA was created following the September 11, 2001, hijacked airplane attacks by al Qaeda on the United States. More than 650 million passengers fly on U.S. airlines, most using one of the more than 400 airports where TSA operates checkpoints.

At a Senate hearing last June, Paul challenged TSA Administrator John Pistole over his agency’s random patdowns of travellers at airports, including the case of a 6-year-old girl from his home state of Kentucky.

“This isn’t to say that we don’t believe in safety procedures,” Paul said. “But I think I feel less safe because you’re doing these invasive exams on a 6-year-old. It makes me think you’re clueless that you think she’s going to attack our country and that you’re not doing your research on the people who would attack our country.”

He has recommended that authorities eliminate patdowns as part of everyday security, saying the TSA should more heavily emphasize non-invasive methods for assessing risk.

The senator has even complained that close screening of members of Congress and other frequent fliers known to airlines and security officials is a poor use of security resources.

On the campaign trail, his father has called for the abolition of the TSA on the grounds it wastes taxpayer money and violates personal liberties.

The agency defends its procedures, which it says are needed to ensure passenger safety.

Last week, the agency was forced to apologize for its zealous searches of two elderly women, including an inspection of one woman’s colostomy bag and putting another elderly woman’s back brace through an X-ray machine.