Dr. Weeks’ Comment:  Antacids are killing us.  Why?  Because taking antacids hobbles our ability to nourish ourselves. We need to DIGEST food and antacids are anti-digestion… think about it!    There are many natural remedies for heartburn and reflux. Ask your doctor about switching you off the antacids and try other options! 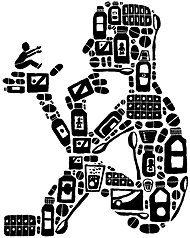 The first time Jolene Rudell fainted, she assumed that the stress of being in medical school had gotten to her. Then, two weeks later, she lost consciousness again.

Blood tests showed Ms. Rudell’s red blood cell count and iron level were dangerously low. But she is a hearty eater (and a carnivore), and her physician pointed to another possible culprit: a popular drug used by millions of Americans like Ms. Rudell to prevent gastroesophageal acid reflux, or severe heartburn.

Long-term use of the drugs, called proton pump inhibitors, or P.P.I.’s, can make it difficult to absorb some nutrients. Ms. Rudell, 33, has been taking these medications on and off for nearly a decade. Her doctor treated her anemia with high doses of iron, and recommended she try to manage without a P.P.I., but that’s been difficult, she said. “I’m hoping I’ll get off the P.P.I. after I complete my residency training,” she said, “but that’s still several years away.”

As many as four in 10 Americans have symptoms of gastroesophageal reflux disease, or GERD, and many depend on P.P.I.’s like Prilosec, Prevacid and Nexium to reduce stomach acid. These are the third highest-selling class of drugs in the United States, after antipsychotics and statins, with more than 100 million prescriptions and $13.9 billion in sales in 2010, in addition to over-the-counter sales.

But in recent years, the Food and Drug Administration has issued numerous warnings about P.P.I.’s, saying long-term use and high doses have been associated with an increased risk of bone fractures and infection with a bacterium called Clostridium difficile that can be especially dangerous to elderly patients. In a recent paper, experts recommended that older adults use the drugs only “for the shortest duration possible.”

Studies have shown long-term P.P.I. use may reduce the absorption of important nutrients, vitamins and minerals, including magnesium, calciumand vitamin B12, and might reduce the effectiveness of other medications, with the F.D.A. warning that taking Prilosec together with the anticlotting agent clopidogrel (Plavix) can weaken the protective effect (of clopidogrel) for heart patients.

Other research has found that people taking P.P.I.’s are at increased risk of developing pneumonia; one study even linked use of the drug to weight gain.

Drug company officials dismiss such reports, saying that they do not prove the P.P.I.’s are the cause of the problems and that many P.P.I. users are older adults who are susceptible to infections and more likely to sustain fractures and have nutritional deficits.

But while using the drugs for short periods may not be problematic, they tend to breed dependency, experts say, leading patients to take them for far longer than the recommended 8 to 12 weeks; some stay on them for life. Many hospitals have been starting patients on P.P.I.’s as a matter of routine, to prevent stress ulcers, then discharging them with instructions to continue the medication at home. Dr. Charlie Baum, head of U.S. Medical Affairs for Takeda Pharmaceuticals North America Inc., said its P.P.I. Dexilant is safe when used according to the prescribed indication of up to six months for maintenance, though many physicians prescribe it for longer.

“Studies have shown that once you’re on them, it’s hard to stop taking them,” said Dr. Shoshana J. Herzig of Beth Israel Deaconess Medical Center in Boston. “It’s almost like an addiction.”

Moreover, proton pump inhibitors have not been the wonder drugs that experts had hoped for. More widespread treatment of GERD has not reduced the incidence of esophageal cancers. Squamous cell carcinoma, which is associated with smoking, has declined, but esophageal adenocarcinomas, which are associated with GERD, have increased 350 percent since 1970.

“When people take P.P.I.’s, they haven’t cured the problem of reflux,” said Dr. Joseph Stubbs, an internist in Albany, Ga., and a former president of the American College of Physicians. “They’ve just controlled the symptoms.”

And P.P.I.’s provide a way for people to avoid making difficult lifestyle changes, like losing weight or cutting out the foods that cause heartburn, he said. “People have found, ”˜I can keep eating what I want to eat, and take this and I’m doing fine,’ ” he said. “We’re starting to see that if you do that, you can run into some risky side effects.”

Many patients may be on the drugs for no good medical reason, at huge cost to the health care system, said Dr. Joel J. Heidelbaugh, a family medicine doctor in Ann Arbor, Mich. When he reviewed medical records of almost 1,000 patients on P.P.I.’s at an outpatient Veterans Affairs clinic in Ann Arbor, he found that only one-third had a diagnosis that justified the drugs. The others seemed to have been given the medications “just in case.”

“We put people on P.P.I.’s, and we ignore the fact that we were designed to have acid in our stomach,” said Dr. Greg Plotnikoff, a physician who specializes in integrative therapy at the Penny George Institute for Health and Healing in Minneapolis.

Stomach acid is needed to break down food and absorb nutrients, he said, as well as for proper functioning of the gallbladder and pancreas. Long-term of use of P.P.I.’s may interfere with these processes, he noted. And suppression of stomach acid, which kills bacteria and other microbes, may make people more susceptible to infections, like C. difficile.

Taking P.P.I.’s, Dr. Plotnikoff said, “changes the ecology of the gut and actually allows overgrowth of some things that normally would be kept under control.”

Stomach acid also stimulates coughing, which helps clear the lungs. Some experts think this is why some patients, especially those who are frail and elderly, face an increased risk of pneumonia if they take P.P.I.’s.

But many leading gastroenterologists are convinced that the benefits of the drugs outweigh their risks. They say the drugs prevent serious complications of GERD, like esophageal and stomach ulcers and peptic strictures, which occur when inflammations causes the lower end of the esophagus to narrow.

The studies that detected higher risks among patients on P.P.I.’s “are statistical analyses of very large patient populations. But how does that relate to you, as one person taking the drug?” said Dr. Donald O. Castell, director of esophageal disorders at the Medical University of South Carolina and an author of the American College of Gastroenterology’s practice guidelines for GERD, who has financial relationships with drug companies that make P.P.I.’s. He added, “You don’t want to throw the baby out with the bathwater.”

Most physicians think that GERD is a side effect of the obesity epidemic, and that lifestyle changes could ameliorate heartburn for many.

“If we took 100 people with reflux and got them to rigidly follow the lifestyle recommendations, 90 wouldn’t need any medication,” Dr. Castell said. “But good luck getting them to do that.”