Dr. Weeks’ Comment:   And all I request of my patients is that they drink  1/2 their weight in ounces of WATER  (that means good, clean water… an increasingly rare commodity! )  a day!

Too Big to Chug: How Our Sodas Got So Huge | Mother Jones 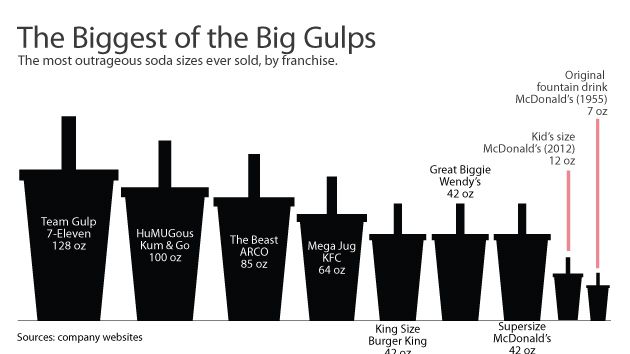 When McDonald’s execs first struck up their lucrative business partnership with the Coca-Cola Company in 1955, they were thinking small””literally. At the time, the only size of the beverage available for purchase was a measly 7-ounce cup. But by 1994, America’s classic burger joint was offering a fountain drink size six times bigger.

And that’s not even the worst of it. Franchises like 7-Eleven, Arco, and the unfortunately named Midwestern chain Kum & Go have all offered drinks upwards of 85 ounces. (To put this in perspective, this is around three times the capacity of a normal human stomach.) Studies have shown that consumers have a hard time gauging sizes properly, so as fountain drinks continue to get bigger and bigger, it’s less and less likely that we’re able to make informed choices. But how did this problem get so big in the first place? Here’s a look at how super sizes became the status quo.