Dr. Weeks’ Comment:  Informed consent is the foundation stone of a civilized relationship among consenting adults.  In medical practice, informed consent is the start of all treatment protocols without which no protocol should be offered.  The doctor is obligated to share, to the best of his or her ability, the pros and cons, benefits and risks of the proposed treatment as well as other competing treatments in order that the patient can be informed and freely choose the treatment which he or she prefers.   It is an art as well as a science to offer full information allowing a free consent because communication between patient and doctor is compromised on account of many stressors including time constraints, stress  (felt by both patient and doctor – for different reasons) careless use of incomprehensible medical jargon, i.e. Latin terms for illnesses “lateral epicondylitis” = pain on side of elbow so why not say it!).  But when you or your loved one was started on an  SSRI drug (probably by a family practitioner ?), did the Doc tell you that SSRI drugs can interfere with your ability to drive?  Read on! 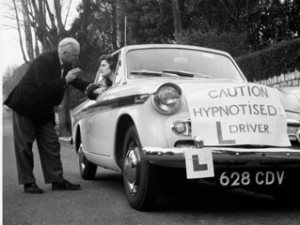 Are selective serotonin reuptake inhibitors safe for drivers? What is the evidence?

Selective serotonin reuptake inhibitors (SSRIs) are widely used medications to treat several psychiatric diseases and, above all, depression. They seem to be as effective as older antidepressants but have a different adverse effect profile. Despite their favorable safety profile, little is known about their influence on traffic safety.

To conduct a literature review to summarize the current evidence on the role of SSRIs in traffic safety, particularly concerning undesirable effects that could potentially impair fitness to drive, experimental and pharmacoepidemiologic studies on driving impairment, 2 existing categorization systems for driving-impairing medications, and the European legislative procedures for assessing fitness to drive before issuing a driver’s license and driving under the influence of medicines.

The article search was performed in the following electronic databases: MEDLINE, PsycINFO, ScienceDirect, and SafetyLit. The English-language scientific literature was searched using key words such as SSRIs and psychomotor performance, car crash or traffic accident, and adverse effects. For inclusion in this review, papers had to be full-text articles, refer to possible driving-related adverse effects, and be experimental or pharmacoepidemiologic studies on SSRIs and traffic accident risks. No restrictions concerning publication year were applied.

Ten articles were selected as background information on driving-related adverse effects, and 15 articles were selected regarding experimental and pharmacoepidemiologic work. Regarding SSRI adverse effects, the most reported undesirable effects referring to driving impairment were anxiety, agitation, sleep disturbances, headache, increased risk of suicidal behavior, and deliberate self-harm. Regarding the remaining issues addressed in this article, inconsistencies were found between the outcomes of the selected experimental and epidemiologic studies and between the 2 existing categorization systems under evaluation. Some pitfalls of the current legislative scenario were identified as well.

Based on the current evidence, it was concluded that more experimental and epidemiologic research is needed to elucidate the relationship between SSRI use and traffic safety. Furthermore, a revision of the existing categorization systems and harmonized European legislation in the field of medication use and driving were highly recommended.

OK  so  here is the NEW research (published 4 years earlier!):

Aug. 18, 2008 ”” People taking prescription antidepressants appear to drive worse than people who aren’t taking such drugs, and depressed people on antidepressants have even more trouble concentrating and reacting behind the wheel.

These were the conclusions of a study recently released at the Annual Convention of the American Psychological Association. University of North Dakota psychologists Holly Dannewitz. PhD, and Tom Petros, PhD, recruited 60 people to participate in a driving simulation in which participants had to make a series of common driving decisions, such as reacting to brake lights, stop signs or traffic signals while being distracted by speed limit signs, pylons, animals, other cars, helicopters or bicyclists.

The simulation tested steering, concentration and scanning. Thirty-one of the participants were taking at least one type of antidepressant while 29 control group members were taking no medications with the exception of oral contraceptives in some cases.

“Individuals taking antidepressants should be aware of the possible cognitive effects as [they] may affect performance in social, academic and work settings, as well as driving abilities,” the researchers wrote. “However, it appears that mood is correlated with cognitive performance, more so than medication use.”

Since completing my residency in psychiatry at Dartmouth (Mary Hitchcock Medical Center), I have long been reluctant to prescribe SSRI (selective serotonin reuptake inhibitor) drugs to patients because of two reasons:  1) the side-effects typically exceed the benefits and 2) there are safer and effective and cheaper corrective options available. As a medical doctor, this is in accordance with the fundamental rule of the practice of medicine  “First Do No Harm”  (“Primum Non Nocere”).

Also, my friend Ann Black Tracy PhD has compiled two highly informative websites which serve as a warning regarding the problems with this class of medication.

I recommend that you and your loved ones carefully consider the content of her websites:

Also I received the following note from John Veneruso

“On behalf of a friend who had been put on SSRI’s, I researched the question about whether they are effective and what harms they do.  I found numerous peer-reviewed scientific articles that I’ve organized simply below with links for easy reading.  Many of these sources are fairly recent as the field of Neuroscience has shed new light on the brain and independent research at universities and elsewhere begins to answer some of the major longer-term questions.  I’ll let the articles speak for themselves.”

Full Summary of Articles on SSRI’s that John Veneruso found so far, organized by topic.

Hippocratic Oath:  First do no harm…

SSRI’s no better than a Placebo

SEROTONIN AND DEPRESSION: A DISCONNECT BETWEEN THE ADVERTISEMENTS AND THE SCIENTIFIC LITERATURE: PLOS MEDICINE JOURNAL

Uncovering a Flaw in Drug Testing for Chronic Anxiety Disorder

Relapse During SSRI Treatment for Depression

Note:  Increase risk in suicidal behavior seen to increase by 2 to 5 times normal level regardless of reason for prescribing an SSRI.

With all the recent concern about SSRIs and suicidality, what advice should be given to the practising clinician regarding the management of a depressed young person?

The following articles and text snippets cover the Apathy Syndrome that is a common side-effect of SSRI’s.

Excerpt:  “How could SSRIs be inducing emotional blunting ? One speculative thought is that SSRIs may be reducing the function of specific brain areas involved in emotional processing. An example of such an area is the anterior cingulate. A recent study suggests that regional brain metabolism, as measured by positron emission tomography, is reduced in the anterior cingulate of depressed subjects when compared to non-depressed subjects (Kennedy et al., 1997). This cortical region is associated with emotional expression, regulation of affect, and is modulated by dopaminergic, noradrenergic, and cholinergic systems. Increases and decreases in cingulate activity have been reported during depression and following treatment (Kennedy et al., 2001). Rather than restore normal function to this area, SSRI administration has been shown to further decrease activity in the anterior cingulate cortex (Ebert and Ebmeier, 1996). Finally, another study found that noradrenergic challenge increased anterior cingulate activity (Dubini et al., 1997).”

“In summary, emotional blunting associated with SSRI treatment may be more common than previously thought. Further study is required to determine the frequency of this phenomenon, whether it is associated primarily with SSRI antidepressants, whether usually associated with the presence of sexual dysfunction, and what the functional implications of these symptoms are. We speculate that in some patients, rather than representing a side-effect, blunting of emotions may be the central therapeutic effect of SSRIs.”

4-week randomized placebo-controlled study in healthy clinicians:  Conclusion:  “This is the first study assessing the impact of a 4-week paroxetine treatment on emotional functioning in healthy psychiatrists and psychologists. The DBPX group was distinguishable from both SBPX and DBPO groups by a decrease in internal emotional experience, suggesting that two factors could be involved in the clinical response to paroxetine: a decrease in emotional feeling and treatment awareness.”

Physicians Are Talking About: Selective Serotonin Reuptake Inhibitors and the Choice to Numb Out

The Possible Impact of SSRIs on Male Sexual Function and Fertility

Serotonin reuptake inhibitor antidepressants and abnormal bleeding: a review for clinicians and a reconsideration of mechanisms.

Beware bleeding with SSRIs and antiplatelets

Lust, Romance, Attachment: Do the Side effects of Serotonin-Enhancing Antidepressants Jeopardize Romantic Love, Marriage, and Fertility?

SSRI’s: Bad to the Bone

SSRI’s Change your Brain for the Worse

National Institutes of Health: Major Side Effects and Warnings

Note:  Some of these anecdotal accounts are supported by research and others are only seen on web forums.  Many research studies need to be performed to investigate these effects.

Note:  Literature suggests 14-20% become addicted.  Addiction time appears to be partially dependent on dosage and time on that dose prior to discontinuation.  Maximal addiction appears to occur after 8 weeks of usage.

Are Psychiatric Medications Making Us Sicker?

A Comprehensive History of SSRI’s: Research, Science, Marketing, and Advertising

“Synthesis: An Undergraduate Journal of the History of Science: 2010” Harvard University Medical School

The Marketization of Depression: The Prescribing of SSRI Antidepressants to Women

Five Reasons not to take SSRIs