Dr. Weeks’ Comment:  Finally, industry is listening to holistic doctors and minimizing rampant use of antibiotics in chicken feed.  How long before conventional doctors start to do the same with patients?

In Hopes of Healthier Chickens, Farms Turn to Oregano 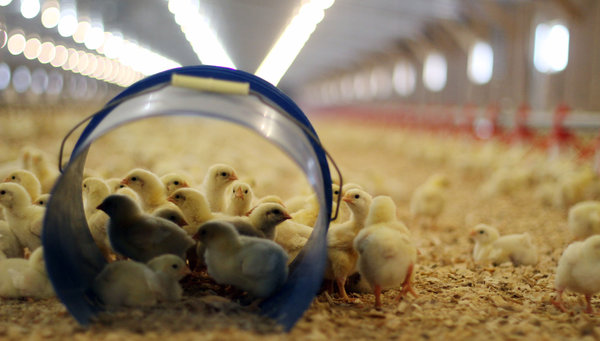 Chickens raised for Bell & Evans, like these in Pennsylvania, eat feed laced with oregano oil.

FREDERICKSBURG, Pa. ”” The smell of oregano wafting from Scott Sechler’s office is so strong that anyone visiting Bell & Evans these days could be forgiven for wondering whether Mr. Sechler has forsaken the production of chicken and gone into pizza.

Oregano lies loose in trays and tied into bunches on tabletops and counters, and a big, blue drum that held oregano oil stands in the corner. “Have you ever tried oregano tea?” Mr. Sechler asked, mashing leaves between his broad fingers.

Off and on over the last three years or so, his chickens have been eating a specially milled diet laced with oregano oil and a touch of cinnamon. Mr. Sechler swears by the concoction as a way to fight off bacterial diseases that plague meat and poultry producers without resorting to antibiotics, which some experts say can be detrimental to the humans who eat the meat. Products at Bell & Evans, based in this town about 30 miles east of Harrisburg, have long been free of antibiotics, contributing to the company’s financial success as consumers have demanded purer foods.

But Mr. Sechler said that nothing he had used as a substitute in the past worked as well as oregano oil.

“I have worried a bit about how I’m going to sound talking about this,” he said. “But I really do think we’re on to something here.”

Skeptics of herbal medicines abound, as any quick Internet search demonstrates. “Oil of oregano is a perennial one, advertised as a cure for just about everything,” said Scott Gavura, a pharmacist in Toronto who writes for the Web site Science-Based Medicine. “But there isn’t any evidence, there are too many unanswered questions and the only proponents for it are the ones producing it.”

Nonetheless, Mr. Gavura said he would welcome a reduction in the use of antibiotics in animals.

At the same time, consumers are growing increasingly sophisticated about the content of the foods that they eat.

Data on sales of antibiotic-free meat is hard to come by, but the sales are a tiny fraction of the overall meat market. Sales in the United States of organic meat, poultry and fish, which by law must be raised without antibiotics, totaled $538 million in 2011, according to the Organic Trade Association. By comparison, sales of all beef that year were $79 billion.

Still, retailers like Costco, Whole Foods and Trader Joe’s, as well as some restaurant chains, complain that they cannot get enough antibiotic-free meat.

Noodles & Company, a fast-growing chain of more than 300 restaurants, recently added antibiotic-free pork to the choices of ingredients that customers can add to their made-to-order pastas. It ensured its supply by ordering cuts of meat that were not in relatively high demand and by committing in advance to buy a year’s worth, said Dan Fogarty, its executive vice president for marketing.

“We’re deliberately voting with our pocketbooks,” he said.

In a nationwide telephone survey of 1,000 adults in March, more than 60 percent told the Consumer Reports National Research Center that they would be willing to pay at least 5 cents a pound more for meat raised without antibiotics.

“Before, it was kind of a nice little business, and while it’s still microscopic in the grand scheme of things, we’re seeing acceptance from retailers across the country, not just in California and on the East Coast,” said Stephen McDonnell, founder and chief executive of Applegate, an organic and natural meats company.

Mr. McDonnell said a confluence of trends, from heightened interest in whole and natural foods to growing concerns about medical problems like diabetes, obesity and glutenallergies, were contributing to the demand for antibiotic-free meat.

There is growing concern among health care experts and policy makers about antibiotic resistance and the rise of “superbugs,” bacteria that are impervious to one or more antibiotics. Those bacteria can be passed on to consumers, who eat meat infected with them and then cannot be treated.

In November, the Centers for Disease Control and Prevention and 25 national health organizations and advocacy groups issued a statement on antibiotics that, among other things, called for “limiting the use of medically important human antibiotics in food animals” and “supporting the use of such antibiotics in animals only for those uses that are considered necessary for assuring animal health.”

Consumer Reports released a study last month that found the bacteria Yersinia enterocolitica in 69 percent of 198 pork chop and ground pork samples bought at stores around the country. Some of the bacteria were resistant to one or more antibiotics.

Analysis of Food and Drug Administration data by the Center for Science in the Public Interest found that 80 percent of all antibiotics sold in the United States are used in animals. The majority of those antibiotics are used to spur growth or prevent infections from spreading in the crowded conditions in which most animal production takes place today.

The European Union has banned the use of antibiotics to accelerate growth, and the European Parliament is pushing to end their use as tools to prevent disease as well.

The oregano oil product Mr. Sechler uses, By-O-Reg Plus, is made by a Dutch company,Ropapharm International. In the late 1990s, Bayer conducted trials on the product, known as Ropadiar in Europe, comparing its ability to control diarrhea in piglets caused by E. coli with that of four of the company’s products.

for the rest of the story, see  http://www.nytimes.com/2012/12/26/science/chicken-farms-try-oregano-as-antibiotic-substitute.html?ref=health