Dr. Weeks’ Comment:  We have prioritized giving our children organic foods since conception!  The science  was convincing that the benefits of organic were real and that pesticided foods are unsafe. Then, when our 4th child took her first airplane flight at age 4, we wondered if we had been too fanatic in insisting on organic because her response, when offered food by the flight attendant was telling: “Is it organic?” the wee one asked.  “No.” was the flight attendant’s response. Our child thought a minute then turned to her mother:  “Mommy, will I die if I eat it?” she asked with big eyes!   But now our oldest sent us this article with “Thank you Thank you” attached.  I am smiling as I post this.

“…By nearly every measure, including fertility, stress resistance and longevity, flies that fed on organic bananas and potatoes fared better than those who dined on conventionally raised produce…”

When Ria Chhabra, a middle school student near Dallas, heard her parents arguing about the value of organic foods, she was inspired to create a science fair project to try to resolve the debate.

Three years later, Ria’s exploration of fruit flies and organic foods has not only raised some provocative questions about the health benefits of organic eating, it has also earned the 16-year-old top honors in a national science competition, publication in a respected scientific journal and university laboratory privileges normally reserved for graduate students. 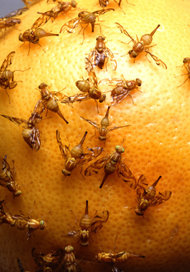 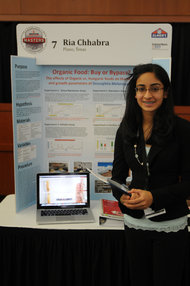 Courtesy of Ria ChhabraRia Chhabra stands in front of her project.

The research, titled “Organically Grown Food Provides Health Benefits toDrosophila melanogaster,” tracked the effects of organic and conventional diets on the health of fruit flies. By nearly every measure, including fertility, stress resistance and longevity, flies that fed on organic bananas and potatoes fared better than those who dined on conventionally raised produce.

While the results can’t be directly extrapolated to human health, the research nonetheless paves the way for additional studies on the relative health benefits of organic versus conventionally grown foods. Fruit fly models are often used in research because their short life span allows scientists to evaluate a number of basic biological effects over a relatively brief period of time, and the results provide clues for better understanding disease and biological processes in humans.

For her original middle-school science project, Ria evaluated the vitamin C content of organic produce compared with conventionally farmed foods. When she found higher concentrations of the vitamin in organic foods, she decided she wanted to take the experiment further and measure the effects of organic eating on overall health.

She searched the Internet and decided a fruit fly model would be the best way to conduct her experiment. She e-mailed several professors who maintained fly laboratories asking for assistance. To her surprise, Johannes Bauer, an assistant professor at Southern Methodist University in Dallas, responded to her inquiry.

“We are very interested in fly health, and her project was a perfect match for what we were doing,” Dr. Bauer said. Although he would not normally agree to work with a middle-school student, he said, Ria performed on the level of a college senior or graduate student. “The seriousness with which she approached this was just stunning,” he said.

Ria worked on the project over the summer, eventually submitting the research to her local science fair competition. The project was named among just 30 finalists in the prestigious 2011 Broadcom Masters national science competition. Dr. Bauer, following his lab’s policy of publishing all research regardless of outcome, urged Ria, then 14, to pursue publication in a scientific journal. Dr. Bauer and an S.M.U. research associate, Santharam Kolli, are listed as co-authors on the research.

Now a sophomore at Clark High School in Plano, Tex., Ria said she was excited to see her work accepted by a scientific journal. “I had no idea what publishing my research meant,” said Ria, who last week was juggling high school exams, a swim meet and a sweet-16 party. “My mom told me, ”˜This is a pretty big deal.’”

Ria has continued to work in Dr. Bauer’s lab. For her 10th-grade science fair project she created a model for studying Type 2 diabetes in fruit flies. The work will be presented in a few weeks. She plans to build on that research by studying the effects of alternative remedies, like cinnamon and curcumin, found in turmeric, on diabetes in fruit flies.

Ria said she was only just beginning to think about applying to colleges and is intrigued by Brown University and the Massachusetts Institute of Technology, although she has not ruled any school in or out. Dr. Bauer said that he was happy to have her working in his lab and that her biggest problem was that “she has too many ideas for her own good.”

Meanwhile, Dr. Bauer said the study of organic foods and fruit fly health has raised some important questions that he hopes can be answered in future research. The difference in outcomes among the flies fed different diets could be due to the effects of pesticide and fungicide residue from conventionally raised foods.

Or it could be that the organic-fed flies thrived because of a higher level of nutrients in the organic produce. One intriguing idea raises the question of whether organically raised plants produce more natural compounds to ward off pests and fungi, and whether those compounds offer additional health benefits to flies, animals and humans who consume organic foods. “There are no hard data on that, but it’s something we’d like to follow up on,” he said.

Dr. Bauer said he’d love to keep Ria around S.M.U. but realizes that she would have her pick of colleges around the country. “She is really extraordinary,” he said. “If she was a graduate student in my lab, she would be tremendous.”

While far more study needs to be conducted to determine the possible benefits of organic foods on human health, the debate has been settled in the Chhabra household, where Ria’s parents no longer argue about the cost of organic food. “All of our fresh produce is organic,” she said.