Dr. Weeks’ Comment: This is a great start: know the price of a surgical procedure BEFORE being put under anaesthesia .. a start towards allowing the patient and the marketplace to hold the otherwise wasteful health care monolith.

The Surgery Center of Oklahoma is an ambulatory surgical center in Oklahoma City owned by its roughly 40 surgeons and anesthesiologists. What makes it different from every other such facility in America is this: If you need an anterior cruciate ligament reconstruction, you will know beforehand ”” because it’s on their Web site ”” that it costs $6,990 if you self-pay in advance. If you need a tonsillectomy, that’s $3,600. Repair of a simple closed nasal fracture: $1,900. These prices are all-inclusive.

Knowing the cost of surgery beforehand can ease the pain later.

Keith Smith, the co-founder of the center, said that it had been posting prices for the last 4 of its 16 years. He knew something was happening, he said, when people started coming from Canada. “They could pay $3,740 for arthroscopic surgery of the knee and not have to wait for three years,” he said. Then he began getting patients from elsewhere in the United States and began to find out ”” “I get 8 or 10 e-mails a week” ”” that he was having an effect on prices far away. “Patients are holding plane tickets to Oklahoma City and printing out our prices, and leveraging better deals in their local markets.”

The Oklahoma City TV station KFOR, which ran a story on the Surgery Center on July 8, said that several other medical facilities in Oklahoma are now posting their prices as well.

KFOR’s story has been picked up by news outlets around the United States. Clearly what the Surgery Center has done is resonating.

On NewChoiceHealth.com, which compares prices offered by different facilities in the same city, Smith’s prices are consistently the cheapest or near it in Oklahoma City. Several hospitals charge $17,200 for laparoscopic hernia repair ”” for which Smith charges $3,975. A gallbladder removal is $24,000 at some hospitals in the city; it’s $3,200 at the Surgery Center. His prices are better in part because ambulatory surgical centers are cheaper than hospitals (for many reasons), but also there’s a virtuous circle here. He can post his prices because they are good ones. And they are good because he’s chosen to compete on price.

What’s remarkable is that this is remarkable. Why should a business become the subject of news stories simply because it tells people the cost of its services?

Because it’s health care. Unlike everything else we buy, when we purchase a medical treatment, surgery or diagnostic test, we buy blind. We do not know the cost of health procedures before we buy. When we do get the bill, we have no idea what the charges are based on and have no way to evaluate them.

The consequences are by now familiar: CNN reports on hospital charges of $1,000 for a toothbrush and $140 for a Tylenol pill. Elisabeth Rosenthal is writing an excellent series on health care costs for The Times ”” her stories, about the cost of births in America and another comparing American hospital prices to those of other countries, are revealing.

Americans pay three, four, sometimes 10 times more for medical procedures, operations and tests than people in other countries like Spain, Canada, the Netherlands, New Zealand ”” although we do not get better care. The most exhaustive catalog of health price horrors ”” and the most thorough explanation of their causes ”” is Steven Brill’s Time magazine cover story of March 4, “Bitter Pill” (subscription required).

Also familiar are the stakes in this game. Health care costs make up 18 percent of gross domestic product; we spend $8,000 per capita ”” twice what other industrialized nations do. Government spending on health care costs is a fifth of the federal budget. The growth of health spending is the “single largest fiscal challenge facing the United States government,” writes the Committee for a Responsible Federal Budget. 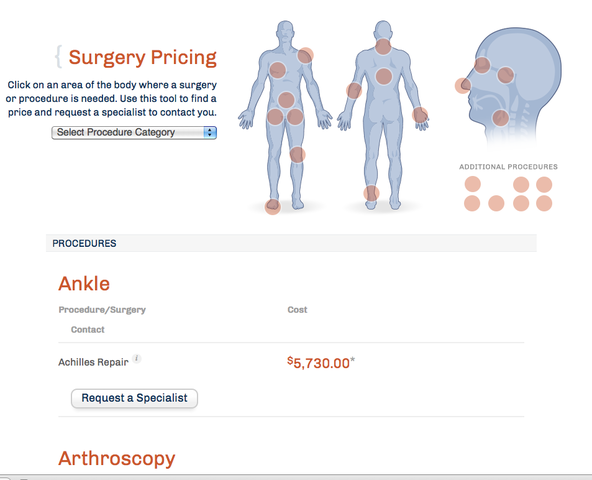 surgerycenterok.comA screenshot from the Surgery Center of Oklahoma pricing list.

Why are health care costs so high? It’s not because of quality; numerous studies have failed to find any correlation between price and quality. Nor is price a function of hospital costs ”” not when one facility in Oklahoma City can charge 7.5 times what another charges for the same procedure.

One of the most important reasons has to do with the political and market power of health care providers, who are essentially able to name their charges. The foundation of that system is the fact that only sellers, and not buyers, know the price. If prices are secret, patients can’t comparison shop. There is no way to push prices down, or force providers to compete on price. Price secrecy hides the need for reform. “Getting prices out in the open is crucial to bringing prices down,” said Katherine Hempstead, senior program officer at the Robert Wood Johnson Foundation.

Some trends in the health care industry are working against transparency. Price opacity comes from the power imbalance in the health care market, and that imbalance is worsening. Hospital chains are consolidating and growing. This may have advantages for patients in some ways, but it increases the chains’ clout and lessens competition. This allows hospitals to fight off demands for transparency.

But most of the events of the last few years ”” especially the last few months ”” have moved the United States toward more price transparency.

Every year, hospitals must tell the federal Centers for Medicare and Medicaid Services how much it costs them to do each procedure that has a billing code. That information has been publicly available from the C.M.S. since the mid-1990s ”” but it has been very hard to use the database, and you could get it only in paper form. Now it’s easier to use (but not free) on two Web sites: Cost Report Data and American Hospital Directory.

May 8 of this year was the biggest day in health care cost transparency yet. Health and Human Services Secretary Kathleen Sebelius released two important databases. One was what Medicare paid for the 100 most common inpatient services at hospitals across the United States. The other was the hospital’s chargemaster price.

Chargemaster prices are set by the hospital alone and reflect what the hospital would like you to pay. They are the basis for calculating the discounts given to insurers, and they are generally what’s billed to people without insurance.   These charges are commonly three times the Medicare price or more, but The Times reported that in the CMS data, some hospitals charged 10 or 20 times the Medicare price. The variation makes your head spin. The average charge for a joint replacement at a hospital in Ada, Okla., was $5,300. The comparable charge in Monterey Park, Calif., was $223,000.

Some of the factors that are increasing transparency are not happy ones. A big one is the recession, which left a lot of people uninsured for the first time. When you are paying out of pocket for health care, you are a lot more interested in finding out costs.

Then there is sheer desperation born of the significant increases in health care costs. With premiums rising at least 5 percent per year, employers are increasingly pushing costs onto employees ”” the employee contribution has doubled in the last five years.   Employees can’t afford more.  But employers are hitting their limits, too ”” it’s either stop offering health coverage, or look for really new ways to bring down the cost.

About 40 states now have some kind of health care transparency laws of varying effectiveness (here’s a report card that doesn’t think much of most of them.) One of the best is New Hampshire’s law, which posts information on actual prices paid so patients can compare them.

And there are Web sites. “It used to be only travel agents knew the cost of plane tickets,” said Jeanne Pinder, who founded the Web siteclearhealthcosts.com, which uses crowdsourcing and reporting (Pinder is a former New York Times reporter) to post prices for shoppable procedures. “Then Kayak and ITA blew that up. If you wanted to buy a house and you asked a Realtor about comparable sales, you’d get, ”˜That’s proprietary.’ Now you have Trulia and Zillow.”

Read previous contributions to this series.

Now health care is getting its Kayaks and Trulias. New Choice Health‘s site allows patients to enter a procedure and city to see the range of self-pay prices offered by facilities in that city.

Patients can even solicit bids. There are other sites; here’s a list.

It’s a long way from Lending Tree or Amazon, but a big step nonetheless. It couldn’t have happened even a few years ago. “Providers are increasingly aware they need to have a cash or self-pay price,” said Pinder. “When we first started out doing this that wasn’t true. They were like, ”˜What, somebody’s uninsured?’ ”

The Surgery Center of Oklahoma is not the only medical facility that posts its prices. Pharmacy clinics like CVS’s Minute Clinics, many urgent care facilities and a small number of hospitals do as well.

I haven’t mentioned the elephant in the room, Obamacare. Only it’s not an elephant on health care transparency. It will require hospitals to publicly report their charges.  But its real job is to increase access to coverage. And while having insurance is crucial, insurance also gives people a reason not to ask the true cost of their medical care. There are ways around this, though ”” plans with a higher deductible and lower premiums not only give people a reason to compare prices,they are usually a better deal.

The Surgery Center of Oklahoma is probably just the beginning. “You’re looking at one example of something that’s going to become really, really important,” said John C. Goodman,  a highly influential conservative health policy analyst.   “Once one hospital in a city starts doing it, everyone has to do it. “

Today’s column focused mainly on transparency for patients who are paying their own bills.  But what about the insured?  Is anyone but Steve Brill combing through medical bills to spot the $1,000 toothbrush? You might think that your insurance company is doing that for you. It is not. In my next column in two weeks, I’ll look at why.