Dr. Weeks’ Comment:  The fact remains, indisputable, that the opportunity to enhance your health is NOT related to things beyond your control which you need to buy.  The tools for health enhancement is the old fashion work:  exercise, intelligent choice of food and geting a good night’s sleep! 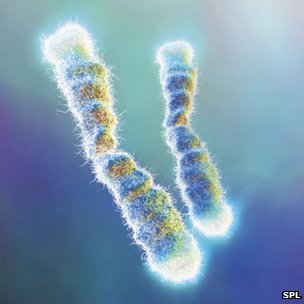 Telomeres cap the end of our chromosomes
Going on a health kick reverses ageing at the cellular level, researchers say.

The University of California team says it has found the first evidence a strict regime of exercise, diet and meditation can have such an effect.

But experts say although the study in Lancet Oncology is intriguing, it is too early to draw any firm conclusions.

The study looked at just 35 men with prostate cancer. Those who changed their lifestyle had demonstrably younger cells in genetic terms.

The researchers saw visible cellular changes in the group of 10 men who switched to a vegetarian diet and stuck to a recommended timetable of exercise and stress-busting meditation and yoga.

The changes related to protective caps at the end of our chromosomes, called telomeres.

Their role is to safeguard the end of the chromosome and to prevent the loss of genetic information during cell division.

As we age and our cells divide, our telomeres get shorter – their structural integrity weakens, which can tell cells to stop dividing and die.

Researchers have been questioning whether this process might be inevitable or something that could be halted or even reversed.

The latest work by Prof Dean Ornish and colleagues suggests telomeres can be lengthened, given the right encouragement.

They measured telomere length at the beginning of their study and again after five years.

Among the 10 men with low-risk prostate cancer who made comprehensive lifestyle changes, telomere length increased significantly by an average of 10%.

In comparison, telomere length decreased by an average of 3% in the remaining 25 men who were not asked to make any lifestyle changes.

Shorter telomeres have been linked with a broad range of age-related diseases, including heart disease, and a variety of cancers.

The study did not set out to check if lifestyle changes and telomere lengthening would improve cancer outcomes, but the researchers say this is something that should be investigated.

Prof Ornish said: “The implications of this relatively small pilot study may go beyond men with prostate cancer. If validated by large-scale randomised controlled trials, these comprehensive lifestyle changes may significantly reduce the risk of a wide variety of diseases and premature mortality.

“Our genes, and our telomeres, are a predisposition, but they are not necessarily our fate.”

Dr Lyn Cox, a biochemistry expert at Oxford University in the UK, said it was not possible to draw any conclusions from the research, but added: “Overall, though, the findings of this paper that changes in lifestyle can have a positive effect on markers of ageing support the calls for adoption of and adherence to healthier lifestyles.”

Dr Tom Vulliamy, senior lecturer in Molecular Biology at Queen Mary University of London, said: “It is really important to highlight that this is a small pilot study.

“Given this, I’m definitely going to wait to see whether this can be replicated on a larger scale and with more sizeable effects before I get excited.”

Experts agree that telomere shortening is unlikely to be the sole explanation for human ageing.

For example, humans have much shorter telomeres than primates and mice, yet live for far longer.

But past work has shown that people who lead a sedentary lifestyle can experience accelerated cellular ageing in the form of more rapid shortening of their telomeres.