Dr. Weeks’ Comments: Could this happen in America?

Thailand Police Lay Down Arms In Solidarity With Protesters Against Corruption 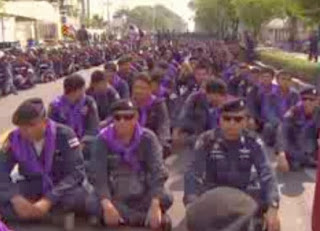 Police officer in Bangkok disobey orders and put their weapons down in solidarity with anti-corruption protesters.

By H. Nelson Goodson
December 6, 2013
Bangkok, Thailand –
On Friday, Political Blind Spot and CNN reported that police in Bangkok layed their weapons, helmets and vests down in solidarity of anti-corruption protesters led by Suthep Thaughsuban. Thaughsuban and his followers planned to take over the Bangkok Metropolitan Police Bureau and police were ordered to repell the takeover. But instead, police decided to lay down their weapons, remove barracks and join the protesters in solidarity.
Protests have taken place for several days and a temporary truce seems to prevail for the moment.
The unprecedented move by police was seem as a big blow to the political machine of former Prime Minister Thaksin Shinawatra government, which widespread corruption has endured for years.