Dr. Weeks’ Comment:   Your true doctor never makes house calls. He or she already lives with you – within actually – and is always seeking to help correct and rebalance your inventory of healing forces. Placebo effects routinely trump actual scientifically  endorsed medications and now we see it trumps surgeries also.

“…A fake surgical procedure is just as good as real surgery at reducing pain and other symptoms in some patients suffering from torn knee cartilage, according to a new study that is likely to fuel debate over one of the most common orthopedic operations…”

By
JOSEPH WALKER
Dec. 25, 2013
http://online.wsj.com/news/articles/SB10001424052702304244904579278442014913458?mod=WSJ_MIDDLENexttoWhatsNewsSecondA fake surgical procedure is just as good as real surgery at reducing pain and other symptoms in some patients suffering from torn knee cartilage, according to a new study that is likely to fuel debate over one of the most common orthopedic operations.

As many as 700,000 people in the U.S. undergo knee surgery each year to treat tears in a crescent-shaped piece of cartilage known as the meniscus, which acts as a shock absorber between the upper and lower portions of the knee joints. The tears create loose pieces of cartilage that doctors have long thought interfere with motion of the joints, causing pain and stiffness. 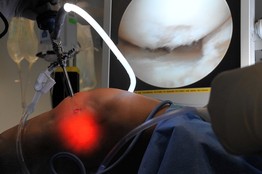 Patients led to believe they had knee surgery saw results comparable to those who had the procedure, a study by Finnish researchers found. Here, an arthroscopic surgery, during which two incisions are made: one for a small camera and the other for the surgical tool. Washington Post/Getty Images

But researchers in Finland who studied two sets of patients””one that received the surgery, and another that was led to believe that it had””observed no significant differences in improvement between the groups after one year.

Surgery did provide a slight advantage in certain areas early on, including a decrease in pain felt after exercising and in some quality-of-life measures, but the differences disappeared by the end of the 12 months, the researchers said in a paper published Wednesday in the New England Journal of Medicine.

The patients agreed to participate in the study prior to the procedure and were informed they would either receive the surgery or not.

“The implications are fairly profound,” said Jeffrey Katz, a professor of medicine at Brigham and Women’s Hospital in Boston who wasn’t involved in the Finnish study. “There may be some relatively small advantages to meniscal surgery, but they’re short-lived.”

The study is likely to stir controversy over the minimally invasive procedure, known as partial meniscectomy, which can cost between $3,000 and $6,000. The study’s authors estimated that it accounts for $4 billion in annual medical costs in the U.S.

The study’s relatively small sample size of 146 patients, however, makes it difficult to draw definitive conclusions about the procedure’s effectiveness, some physicians said.

“It’s hard to step back and say arthroscopy is overdone,” said Nicholas Giori, an associate professor of orthopedic surgery at Stanford University. 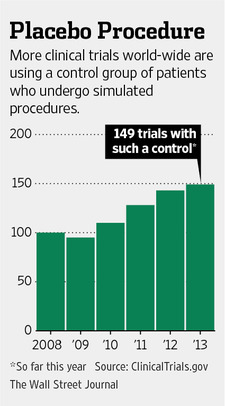 Teppo L.N. JÃ¤rvinen, one of the study’s authors, said he was uncertain whether the research paper would change clinical practice. A previous study showed that physical therapy was just as effective as surgery for patients with both a meniscal tear and osteoarthritis, but many physicians have continued to recommend the procedures anyway, he said. “Doctors have a bad tendency to confuse what they believe with what they know,” said Dr. JÃ¤rvinen, an orthopedic resident and adjunct professor at Helsinki University Central Hospital.

Meniscectomy is performed by inserting thin surgical instruments, including one called an arthroscope that is equipped with a video camera, through incisions in the knee. In a partial meniscectomy, the procedure evaluated in this study, surgeons trim and removes torn pieces rather than the entire meniscus so that they don’t interfere with the flexing of the knee joint.

Patients in the Finnish study were between 35 and 65 years old and suffered from meniscus tears that appeared gradually over time, rather than after a specific traumatic event like a sports injury. They underwent arthroscopy to confirm the tears, but for patients in the control group, doctors didn’t remove the cartilage. Patients received either local anesthesia or general anesthesia that put them to sleep for the duration of the procedure. For control patients who were awake, physicians simulated the procedure by pressing instruments firmly against the outer portion of the knee and kept patients in the operating room for the length of time it would take to complete the surgery.

Similar to the practice of giving some patients sugar pills or placebos in drug studies, simulated surgery is among the most rigorous ways to evaluate the effectiveness of surgical procedures. Medical researchers hope to control for the psychological benefit that patients receive from knowing they have been treated, which can skew study results.

Simulated surgery, which also is used in some medical-device studies, is less common than the use of drug placebos, in part because making incisions into the skin carries risks, such as infection or bleeding. Roughly 150 clinical trials begun this year included a sham procedure, compared with about 2,500 studies that used a drug placebo, according to a search of a clinical trials database run by the National Institutes of Health.

The Finnish researchers excluded many potential patients from entering the study, including those with additional injuries and those who had previously undergone knee operations, in an effort to study only those who were most likely to benefit from the surgery