Dr. Weeks’ Comment:    Read the law:   “distribution” of HGH is illegal but clearly not  “administration, dispensing or prescribing” of HGH. The former is what drug dealers, suppliers, trainers and even parents (!!) do – it is illegal diversion of a prescription drug. The latter is what physicians do. It is part of the practice of medicine. Note, legally speaking and by definition, a physician can only “administer” (i.e. giving a shot or handing a pill or rubbing on a topical medication),   “dispense” (i.e. hand over the actual prescribed medication at the clinic)   and or “prescribe”  (i.e. write on a legal document, the prescription pad for delivery to a registered pharmacist for dispensing).

Prohibited distribution of human growth hormone. (1) Except as provided in paragraph (2), whoever knowingly distributes, or possesses with intent to distribute, human growth hormone for any use in humans other than the treatment of a disease  (or other recognized medical condition, where such use has been authorized by the Secretary of Health and Human Services under section 355 of this title and pursuant to the order of a physician), is guilty of an offense…

So the law is intended to allow physicians to prescribe HGH for diseases (or other non-disease conditions like wasting from AIDs which is not a disease but is helped by HGH) and it is intended to prevent parents, trainers, coaches – all  of who get secondary gain if the kids takes performance enhancing drugs – from “distributing” HGH to kids for the purposes of creating an unfair competitive advantage.  But the law is broken by 11% of high school kids.

In the article below, read it here we have a trainer complaining that athletes and their parents pressure him to give them HGH. He threatens to report the parents to Child Protective Services.

“….Trumbetti said teens ”” and parents ”” ask him about it every day. He said he threatened to call child services on a dad who wanted to put his 14-year-old son on human growth hormones. The boy was only 5-foot-2 and 108 pounds….you have parents that are encouraging it and more like steroids or HGH because they think it’ll help their kid get a college scholarship…”

“…I remember a kid wrestling at 160 pounds as a junior. The next year, he was a solid 215 pounds and jacked-up,” Chisholm said. “He did that in one season and won the state title…”` 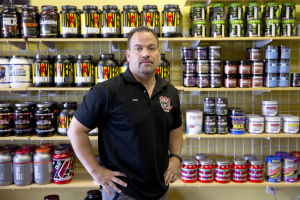 PHILADELPHIA ”” Michael Guerreri wanted to try human growth hormones so he could look like a pro wrestler. Joe Badalanato hoped HGH would help him become a better football player. James O’Brien figured the drug would improve his fastball.

The three 18-year-olds from suburban Philadelphia told The Associated Press this week that they bought bottles of HGH online in the past year. Turns out, what they bought was fake.

Their experiences are part of a growing trend.

Experimentation with human growth hormones by America’s teens more than doubled in the past year, according to a national survey released Wednesday by the Partnership for Drug-Free Kids.

“I would say at least 20-25 percent use anabolic steroids,” said Frank Trumbetti, owner of Rock Bottom Nutrition and Fitness Center in Cherry Hill, New Jersey. “As for HGH, there is such an overuse of everything when it comes to looking for real stuff.”

Many products claiming to be human growth hormones are widely available on the internet. But getting authentic HGH ”” which can cost up to $1,000 per kit for a monthly supply ”” isn’t that simple.

Saunders trains thousands of high school and college athletes and hundreds of professional athletes at his 15 locations across six states, including Hawaii. James Harrison, Hines Ward, LeSean McCoy and even actor Liam Hemsworth are just a few of his previous clients.

“We tell all our guys you can’t substitute hard work and a proper nutrition plan,” Saunders said. “Using HGH and steroids is pure laziness.”

But many athletes are looking for a quick fix and turning to performance-enhancing drugs.

In a confidential 2013 survey of 3,705 high school students, 11 percent reported using synthetic HGH at least once ”” up from about 5 percent in the four preceding annual surveys. Teen use of steroids increased from 5 percent to 7 percent over the same period, the survey found.

“We had no clue we weren’t using real HGH,” Guerreri said. “We figured it out when we didn’t get any results from it and then a guy at our gym told us HGH doesn’t come in a bottle.”

The three friends were walking around the ballpark during a Phillies-Giants game on Monday night wearing fitted T-shirts. The attire showed off their bulging biceps, and the trio say they tried various supplements ”” both legal and illegal ”” throughout their high school years.

Guerreri, who is 6-foot-4, 220 pounds, is chiseled. He’s closer to accomplishing his goal than his two friends because he looks a little like Randy Orton, his favorite WWE star.

Badalanato didn’t even start at running back his senior year and remains undecided on college. O’Brien’s fastball only topped out at 81 mph.

“A lot of guys we know are interested in HGH, but it’s much easier to get other stuff that’s cheaper and works faster,” Badalanato said.

Dr. John Kolonich, a chiropractor in Franklinville, N.J., said authentic HGH is only injectable and also noted it is very expensive.

“It has to be refrigerated once it’s constituted and it’s not a testosterone where in two weeks you start noticing results,” Kolonich said. “HGH is not the drug of choice for a high school kid who wants to play better.

That doesn’t stop teens from looking for it.

Trumbetti said teens ”” and parents ”” ask him about it every day. He said he threatened to call child services on a dad who wanted to put his 14-year-old son on human growth hormones. The boy was only 5-foot-2 and 108 pounds.

“That’s just one example,” Trumbetti said. “You have some moms and dads that are afraid to have their kids take just protein powder and then you have parents that are encouraging it and more like steroids or HGH because they think it’ll help their kid get a college scholarship. What made it worse was when Roger Clemens and Brian McNamee went up there before the House Oversight Committee. Having that publicized and seeing Clemens and Barry Bonds, two of the greatest players of our generation, influenced kids because they think that’s how they can better.”

John Chisholm, a high school teacher in Pennsauken, N.J., coached wrestling for 20 years at three different schools. He never heard of anyone taking HGH, but said steroid use was more common.

“I remember a kid wrestling at 160 pounds as a junior. The next year, he was a solid 215 pounds and jacked-up,” Chisholm said. “He did that in one season and won the state title.”

Guerreri, Badalanato and O’Brien went searching in the wrong places for their supply of human growth hormone. Other teens say they know where to get it.

Vince Castanzo, a young weightlifter who was working out at a fitness center in Turnersville, N.J., said, “Find the biggest guy in your gym, the guy who isn’t just big but is lean, cut, has the six-pick abs, and there’s a good chance he knows where to get the real HGH.”