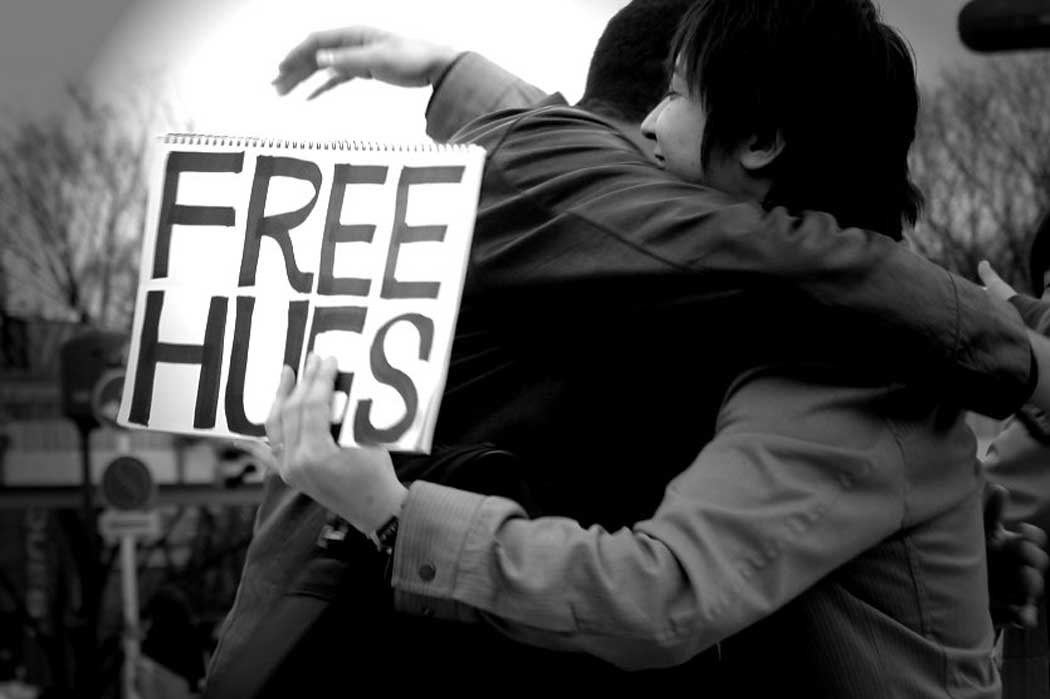 A new hugging shop has just opened in Portland, Oregon. Of course it has. Just around the corner from the donut shop where you can get married, the retro video game arcade, and the microbrewery powered by bicycles. No, this isn’t the latest episode of Portlandia; all of those things are real, including the hugging shop, where $60 buys you an hour of (nonsexual) cuddles.

Now, as a Brit, I become violently ill at the thought of any human contact more personal than a handshake. And I’m not even keen on those. But in an op-ed piece in the Guardian, Dr Tiffany Field, Director of the Touch Research Institute at the University of Miami, argued that the hugging shop meets an important need and that touch can help with all kinds of conditions, including aggression, depression, arthritis and back pain. So does the evidence back up her claims? Let’s turn to JSTOR to find out…

In general, the results are rather impressive. Field’s own review paper summarizes studies showing that massage therapy leads to 31-47% more weight gain in premature babies than standard treatment alone. Furthermore, one study found that having the mother deliver the massage reduced levels of postnatal depression. Interestingly, the best effects””from a weight gain perspective””are seen when moderate pressure is applied, suggesting that the effects may be at least partly physical, rather than wholly psychological.

This raises the question of just how massage exerts its beneficial effects. One possibility is that the touch increases rates of protein synthesis, though the only evidence cited comes from a study with rats. Another possibility is that massage increases levels of physical activity in infants, which””counterintuitively perhaps””leads to weight gain, though again the evidence is patchy. Perhaps the most promising hypothesis is that stimulation of the vagus nerve increases the release rate of hormones involved in food absorption, such as insulin. Field cites studies showing that levels of both vagal activity and circulating insulin seem to increase with massage.

Another of Field’s studies investigated whether touch could help to increase bonding between depressed mothers and their babies. Sadly, infants of depressed mothers often seem to act “depressed” too, looking and smiling less at their mothers, and more often fussing and looking away. The study used what is known as the “still face” paradigm: the mother is asked to look at her baby, but not to smile. In this situation, babies rarely smile, and sometimes cry or grimace. After establishing how each baby reacted to the still face, the researchers asked mothers to stroke and rub their babies’ arms, legs and feet for 90 seconds. This led to higher levels of smiling, and lower levels of crying and grimacing, but interestingly only amongst babies with depressed mothers. The babies with non-depressed mothers were not consoled by the touching, apparently because they found the “still face” paradigm so distressing (heartbreakingly, the babies of depressed mothers were used to it).

It’s important to point out that it’s not only Field’s own word that finds a beneficial effect of touching on babies and young children. Her review cites a meta-analysis by Ottenbacher et al (1987) which found a positive effect for five out of six categories studied: motor reflexes, cognitive and language development, social and personal development, physiological health, and overall development. Furthermore, many of the benefits seem to hold for adults too. The most comprehensive meta analysis (not currently on JSTOR, but you can read the abstract here) found a beneficial effect of massage therapy for anxiety, depression, blood pressure, and heart rate (though not for negative mood, cortisol level, or short term pain reduction).

So, it’s so far so good for Dr Field’s claims. But hold on just a minute. None of these studies looked directly at hugging or cuddling. As Field herself acknowledges in her Guardian piece, we are extrapolating here from studies of massage therapy (and the odd study of touch more generally). The benefits of hugging a stranger remain””at least as far as I can see””entirely unproven. So if the entrepreneurs behind the Portland cuddling shop genuinely want to improve the health and happiness of their clientele using nonsexual touching, the evidence suggests that they would be better off selling massages. Delivered by a heavily-tattooed bass player with big glasses, a beard, and a vintage Western shirt, of course!