Dr. Weeks’s Comment:  Apitherapy is the medicinal use of product of the honey bee hive: raw honey, pollen, propolis, royal jelly, wax and most powerful of all, the bee venom.  I was fortunate, prior to starting medical school in Burlington Vermont, to meet and apprentice with America’s master apitherapist Charles Mraz in Middlebury Vermont starting in 1985. After seeing so many crippled people recover their health after bee venom treatments (BVT) at the home of Charlie and his wonderful wife Marge, I determined to take apitherapy out of the garden and into the medical world. My medical school professors, for the most part, were critical of my interest and the chief rheumatologist in particular was angry with me for paying attention to the “old quack” in Middlebury. (I later learned that he had suffered years of embarrassment by Charlie curing the patients which he as the chief rheumatologist had pronounced incurable! ) By combing through Charlie’s guest book, I collected telephone numbers and called enough grateful apitherapy patients to raise sufficient funds to form the American Apitherapy Society (AAS) in 1987. It is gratifying, now almost 30 years later to see the society continue to educate people about the benefits of apitherapy. This article describes an apitherapist in Israel and offers a video featuring a courageous multiple sclerosis patient in Taiwan and her loving husband whose quest to cure her led him to the honey bee. 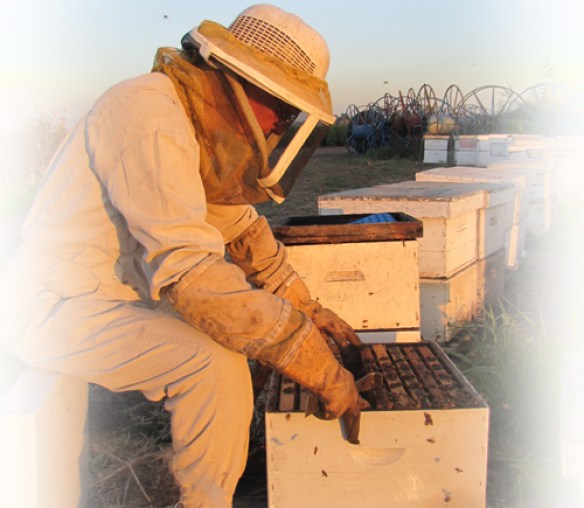 We thought we knew plenty about the medicinal value of honey and bee products. Bee pollen, propolis, and royal jelly have all been used as medicine for centuries. But who knew that bee venom has helped people for just as long?

Talking to beekeeper Yanay Zacks in Moshav Tsufit, Israel, we learned that patients suffering from  arthritis, gout, chronic fatigue syndrome, fibromyalgia, multiple sclerosis, and other ailments claim relief from their symptoms through apitherapy – being stung by bees.

“We supply bees to two women suffering from multiple sclerosis,” says Mr. Zacks. Admitting that sacrificing the bees sometimes means taking a financial loss, Mr. Zacks altruistically continues to give the women their little flying doctors. “Each has taken 90 stings a week for the past four years,” he says. “They claim they get huge relief from the coldness and pain in their feet and legs.”

His wife chimes in: “A person can take a lot of stings, but after a while they have to take a break. It does hurt, after all. Every few months, the ladies stop therapy for several weeks and then send their husbands back for more bees.”

It’s not understood how exactly the venom helps, but theoretically it “kick starts” the production of cortisol, a substance similar to cortisone that the body produces naturally. It is known that the substance in the sting is rich in anti-inflammatory, analgesic, and immuno-modulatory properties.

There seems to be no interest in apitherapy by conventional doctors in Israel. The Zacks told us that a few acupuncturists have taken it up and apply the stings to acupuncture points for more focused therapy. For more information on apitherapy in Israel, look at the website of the Israel Apitherapy Center.

Mostly, it’s arranged informally. A family member receives a box with a certain number of bees in it. Gently picking each bee up with tweezers or even her fingers, she sits it down on the patient’s arm or leg. The outraged bee stings its enemy, the patient, and the sting separates, continuing to gently pump its valuable venom in. And so it is done by lay practitioners in countries around the world.

More international apitherapy organizations exist to inform the public and support research into the subject. If you’re considering using bee stings to relieve an ailment, it’s vital to first find out if you’re allergic to them. Afterward, you can choose between a clinic (in China clinics may charge $2.50 per sting) or just getting the bees from a sympathetic beekeeper.

The National Geographic Society has an interesting video on apitherapy: