Dr. Weeks’ Comment:   In a recent lecture which was live streamed to over 1/2 a million viewers, I describe the deterioration of my profession to the nadir now where the abbreviation for medical doctor, “MD”, a once respected term is now more accurately said to represent “Marketing Director” for big pHARMa.  Friends, I listen to all this noise about health care reform and shake my head. Take it from a doc who has worked with patients for over 30 years, until the patient can hold the doctor responsible there will be no meaningful health care reform. None.  Rude doctors. Insulting doctors. Doctors who have you cool your heels in their waiting room for 45 minutes. Doctors who tell you “Whatever you are doing, keep doing it because it seems to be helping.” but at the same time are not interested to learn what you are doing.  And my real pet peeve – the doctors who work ON you but who work FOR the third party (that would be the party which actually pays the doctor). Good luck holding those doctors (who you don’t even pay)  accountable…   think for a minute, why would the doctor who is not being paid by you care more about your opinion than he or he does the opinion of the third-party who pays the doctor?   Of course, some doctors do care more about the health and welfare of their patient but are you surprised to learn not all doctors do?

Here we learn that big pHARMa is very happy with the status quo. 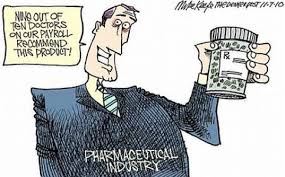 (Natural News) Two-thirds of Americans are currently in the care of a physician that is being paid by a drug company, and they may not even realize it. A study conducted by Genevieve Pham-Kanter, Ph.D., surveyed more than 3,500 adults and linked their doctors to data from Open Payments, a government website that reports pharmaceutical and device industry payments to physicians.

The results of the study revealed that about 65% of the people surveyed had visited a doctor within the past year that had received payments or gifts from pharmaceutical or medical device companies. Even more shocking is that only 5% knew that their doctors had been given these incentives. Patients who were visiting an orthopedic surgeon or OBGYN doctor were shown to have the highest percentage of being under the care of a physician receiving some kind of incentive. Pham-Kanter said, “Patients should be aware of the incentives that their physicians face that may lead them to not always act in their patients’ best interest. And the more informed patients are about their providers and options for care, the better decisions they can make.” (RELATED: Get all the news Google is trying to hide from you at Censored.news)

The Open Payments website is a federal program that collects information about payments drug and device companies make to physicians in the form of travel, research, gifts, speaking fees, and meals. It also includes any ownership interests that doctors or their immediate family members may have in these companies as well. While most physicians receive payments averaging about $193, it does add up over time. Between August 2013 to December 2015 Genetech, Inc. ,the maker of drugs such as the allergy drug Xolair and anti-viral drug Tamiflu, made payments totaling $727 million to doctors and research hospitals.