Dr. Weeks’ Comment:  Glyphosate is not the worst part of RoundUp™ – other additives are equally lethal. Read the following and eat organic.

“…A lawsuit against Monsanto in San Francisco started at the beginning of this week. US Attorneys Baum Hedlund, Aristei and Golman are representing 365 plaintiffs who allege that their cancers, or those of their loved ones who died, were caused by Roundup. 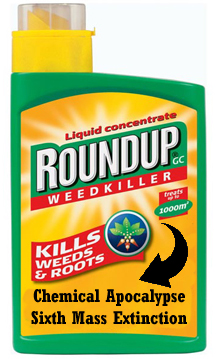 What is the Sixth Mass Extinction?

For many decades, scientists have warned that human activity is pushing life on our planet beyond the point of no return. In the Earth’s history there have been five mass extinction events, most recently the Cretaceous–Tertiary mass extinction that occurred almost 65 million years ago and was thought to have been caused by the massive impact of an asteroid on Planet Earth. In the 21st century, we face a sixth mass extinction. According to an article published in July by Gerardo Ceballos and colleagues, the Earth is experiencing a huge decline in species’ populations and a great reduction in their range that could have profound effects on the ecosystems on which human civilisation depends. They found that about 30% of land vertebrates including reptiles, birds, and amphibians are experiencing a decline and losses in local population. In some parts of the world they are losing 70% of their species because of habitat degradation. The authors describe their findings as a biological annihilation, claiming that the sixth mass extinction might be already underway. (Lancet)

What is Driving it?

We are now living in the Anthropocene, the first time in Earth’s history when synthetic chemicals—created by humans—are damaging the planet and contributing to a major loss of biodiversity. Pesticides are a particular problem in this regard. Agricultural practices changed dramatically following World War II. Methods for the production of nitrogen for manufacturing explosives were adapted for use as fertilizer in agriculture. Further, chemicals used to combat insect vectors for disease during World War II were adapted for the control of insect pests in agriculture. Eventually, herbicides used as defoliants to destroy food supplies and aid in combating soldiers using forests as cover, were customized to control weeds in agriculture. The heavy use of pesticides in agriculture has resulted in global exposure to these chemicals. Travelling through water, air, and in migrating animals, pesticides can be found in drinking water reservoirs, the atmosphere, on mountain tops, and even in remote areas in the Arctic where they are not used. The widespread exposure to agrichemicals has altered landscapes and ecosystems around the world. In addition to directly killing non-target organisms, target and non-target organisms can evolve resistance to pesticides, resulting in altered gene pools. (Elementa)

I was very disappointed that you did not acknowledge my email about the chemical apocalypse that is destroying human health and the environment. Invertebrates are the canaries in the coal mine and we should be very worried about their disappearance.

A lawsuit against Monsanto in San Francisco started at the beginning of this week. US Attorneys Baum Hedlund, Aristei and Golman are representing 365 plaintiffs who allege that their cancers, or those of their loved ones who died, were caused by Roundup.

At the beginning of the trial Judge Vincent Chhabria will hear the science from eight independent scientists who believe that Roundup does cause Non-Hodgkin’s Lymphoma and four scientists chosen by Monsanto as denying it.

(Remember from the lawsuit (Page 14 line 1) that an email was uncovered in 2003 in which Dr Williams Heydens admitted that he ‘ghost-wrote’ an article for Gary Williams: “Roundup herbicide does not pose a health risk to humans” when their own scientists privately wrote that: “[t]he terms glyphosate and Roundup cannot be used interchangeably …For example you cannot say that Roundup is not a carcinogen…we have not done the necessary testing on the formulation to make that statement.”)

At the end of the debate Judge Chhabria will decide whether or not to let the plaintiffs go ahead with their lawsuits. Other cancers have been linked to Roundup as well: Bone, Colon Cancer, Kidney Cancer, Liver Cancer, Melanoma, Pancreatic Cancer and Thyroid Cancer.

In the last 30 or so years, deaths from neurodegenerative disorders have increased, while the deaths from other diseases such as cancer and heart disease have decreased

I present evidence that these are linked to increasing levels of Roundup residues poisoning non-organic food as well as the non-agricultural use of Roundup in cities and towns for weed control.

I attach 2 Roundup and Neurodegenerative Disorders.

‘The Royal Society is a self-governing Fellowship of distinguished scientists drawn from all areas of science, technology, engineering, mathematics and medicine’

There are 1,646 Fellows, 177 in Health and Health Sciences and 225 in sciences related to Ecology. Why have none of these distinguished scientists noticed that Britain and the US are close to becoming biological deserts and that human health is rapidly deteriorating?

In 2014 Nature observed that in order to obtain a degree in biology, it was not necessary to study  natural history: whereas in the US in 1950 it required two or more. The editors recommended that biology diploma should not be awarded without a course in identifying organisms, learning the basic techniques for observing and recording data. Courses that have replaced it are: Molecular biology, genetics, experimental biology, mathematical modelling, population biology and statistics.

However, many of these fields rely on data, specimens and collections from natural history. In 2014 Joshua J Tewksbury wrote a paper Natural History’s place in science and society. It was described by ecologists as ‘challenging and exciting’. “The fundamental properties of organisms—what they are, how and where they live, and the biotic and abiotic interactions that link them to communities and ecosystems—are the domain of natural history. We provide examples illustrating the vital importance of natural history knowledge to many disciplines, from human health and food security to conservation, management, and recreation. We then present several lines of evidence showing that traditional approaches to and support for natural history in developed economies has declined significantly over the past 40 years. Finally, we argue that a revitalization of the practice of natural history—one that is focused on new frontiers in a rapidly changing world and that incorporates new technologies—would provide significant benefits for both science and society”.

IT IS TOO LATE: Biological annihilation via the ongoing sixth mass extinction signaled by vertebrate population losses and declines by Gerardo Ceballos, Paul R. Ehrlich & Rodolfo Dirzo was published in 2017. “Dwindling population sizes and range shrinkages amount to a massive anthropogenic erosion of biodiversity and of the ecosystem services essential to civilization. This “biological annihilation” underlines the seriousness for humanity of Earth’s ongoing sixth mass extinction event.” Gerado Ceballos, the lead author gave an example from close to home: “We used to have swallows nesting every year in my home in Mexico City – but for the last ten years there are none”.(Guardian Damian Carrington 10/7/2017) “The serious warning in our paper needs to be heeded because civilisation depends utterly on the plants, animals, and microorganisms of Earth that supply it with essential ecosystem services ranging from crop pollination and protection to supplying food from the sea and maintaining a liveable climate. Other ecosystem services include clean air and water.”

The second author Paul R. Ehrlich wrote a piece on his research for the Guardian: Opinion: You don’t need a scientist to know what’s causing the sixth mass extinction: In it he said: “Less recognised, but perhaps even more dangerous to both people and wildlife, is the increasing toxification of the entire planet with synthetic chemicals. Growing populations want myriad more items of plastic that often leak toxic chemicals: more cosmetics, cleansing compounds, pesticides, herbicides, preservatives and industrial chemicals. Many of these novel chemicals mimic natural hormones, and in tiny quantities can alter the development of animals or human children, with potentially catastrophic consequences.”

In Jared Diamond’s 2005 book: Collapse: How Societies Choose to Fail or Survive, he identified poisoning with toxic chemicals as No 8 (page 491) in Chapter 16: The Most Serious Problems.

In 2018 Chemical Corporations, Regulators, their lobbyists and Biocides Hub, ChemWatch (the industry’s Centre in Shrewsbury UK which organises training Courses in BIOCIDES around the world) have destroyed life in the environment (ecocide) and devastated human health (genocide). Few people have been informed about the poisoning of food, air and water.

I believe that Open Letter- Where have all our insects and birds gone? and 2 Roundup and Neurodegenerative Disorders are important documents.

They should be sent to all 1,646 Fellows. It gives them the opportunity, should they wish, to revise their diets to organic food and campaign to stop pesticides being sprayed everywhere.

It is a pity that the UK Corporate Media is withholding such vital information about the subject from the public.