By BENEDICT CAREY and GARDINER HARRIS

It seemed an ideal marriage, a scientific partnership that would attack mental illness from all sides. Psychiatrists would bring to the union their expertise and clinical experience, drug makers would provide their products and the money to run rigorous studies, and patients would get better medications, faster. 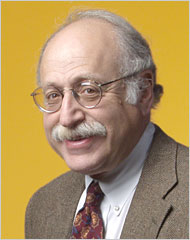 But now the profession itself is under attack in Congress, accused of allowing this relationship to become too cozy. After a series of stinging investigations of individual doctors’ arrangements with drug makers, Senator Charles E. Grassley, Republican of Iowa, is demanding that the American Psychiatric Association, the field’s premier professional organization, give an accounting of its financing.

The association is the voice of establishment psychiatry, publishing the field’s major journals and its standard diagnostic manual.

“I have come to understand that money from the pharmaceutical industry can shape the practices of nonprofit organizations that purport to be independent in their viewpoints and actions,” Mr. Grassley said Thursday in a letter to the association.

In 2006, the latest year for which numbers are available, the drug industry accounted for about 30 percent of the association’s $62.5 million in financing. About half of that money went to drug advertisements in psychiatric journals and exhibits at the annual meeting, and the other half to sponsor fellowships, conferences and industry symposiums at the annual meeting.

This weekend in Chicago, the psychiatry association’s board will meet behind closed doors, in part to discuss how to respond to the increasingly intense scrutiny and questions about conflicts of interest.

“With every new revelation, our credibility with patients has been damaged, and we have to protect that first and foremost,” said Dr. Steven S. Sharfstein, a former president of the association and now president of the Sheppard Pratt Health System in Baltimore. “I think we need to review all arrangements between doctors and industry and be very clear about what constitutes a conflict of interest and what does not.”

One of the doctors named by Mr. Grassley is the association’s president-elect, Dr. Alan F. Schatzberg of Stanford, whose $4.8 million stock holdings in a drug development company raised the senator’s concern. In a telephone interview, Dr. Schatzberg said he had fully complied with Stanford’s rigorous disclosure policies and federal guidelines that pertained to his research.

Blocking or constraining researchers from trying to bring medications to market “will mean less opportunities to help patients with severe illnesses,” Dr. Schatzberg said, adding, “Drugs that are helpful may not be developed by big pharmaceutical companies, for a variety of reasons, and we need some degree of communication between academia and industry” to expand options for patients.

Commercial arrangements are rampant throughout medicine. In the past two decades, drug and device makers have paid tens of thousands of doctors and researchers of all specialties. Worried that this money could taint doctors’ research plans or clinical judgment, government agencies, medical journals and universities have been forced to look more closely at deal details.

In psychiatry, Mr. Grassley has found an orchard of low-hanging fruit. As a group, psychiatrists earn less in base salary than any other specialists, according to a nationwide survey by the Medical Group Management Association. In 2007, median compensation for psychiatrists was $198,653, less than half of the $464,420 earned by diagnostic radiologists and barely more than the $190,547 earned by doctors practicing internal medicine.

But many psychiatrists supplement this income with consulting arrangements with drug makers, traveling the country to give dinner talks about drugs to other doctors for fees generally ranging from $750 to $3,500 per event, for instance.

While data on industry consulting arrangements are sparse, state officials in Vermont reported that in the 2007 fiscal year, drug makers gave more money to psychiatrists than to doctors in any other specialty. Eleven psychiatrists in the state received an average of $56,944 each. Data from Minnesota, among the few other states to collect such information, show a similar trend.

In both states, individual psychiatrists are not top earners, but consulting arrangements are so common that their total tops all others. The worry is that this money may subtly alter psychiatrists’ choices of which drugs to prescribe.

An analysis of Minnesota data by The New York Times last year found that on average, psychiatrists who received at least $5,000 from makers of newer-generation antipsychotic drugs appear to have written three times as many prescriptions to children for the drugs as psychiatrists who received less money or none. The drugs are not approved for most uses in children, who appear to be especially susceptible to the side effects, including rapid weight gain.

Senator Grassley’s investigations have not only detailed how lucrative those arrangements can be but have also shown that some top psychiatrists failed to report all their earnings as required.

After The Times reported on such an arrangement involving Dr. Melissa P. DelBello of the University of Cincinnati, Mr. Grassley asked the university to provide her income disclosure forms and asked AstraZeneca, the maker of the antipsychotic Seroquel, to reveal how much it paid her.

In scientific publications, Dr. DelBello has reported working for eight drug makers and told university officials that from 2005 to 2007 she earned about $100,000 in outside income, according to Mr. Grassley.

But AstraZeneca told Mr. Grassley it paid her more than $238,000 in that period. AstraZeneca sent some of its payments through MSZ Associates, an Ohio corporation Dr. DelBello established for “personal financial purposes.”

The University of Cincinnati agreed to monitor those payments more closely.

In early June, the senator reported to Congress that Dr. Joseph Biederman, a renowned child psychiatrist at Harvard Medical School, and a colleague, Dr. Timothy E. Wilens, had reported to university officials earning several hundred thousand dollars apiece in consulting fees from drug makers from 2000 to 2007 when in fact they had earned at least $1.6 million each.

Another member of the Harvard group, Dr. Thomas Spencer, reported earning at least $1 million after being pressed by Mr. Grassley’s investigators. The Harvard psychiatrists said they took conflict-of-interest policies seriously and had abided by disclosure rules.

In late June, after Mr. Grassley singled out Dr. Schatzberg, Stanford disputed some of the numbers in the report and has denied that Dr. Schatzberg violated any research rules devised to police such conflicts.

In an interview on Wednesday, Dr. Nada L. Stotland, president of the psychiatric association, said the group had studied Mr. Grassley’s letter and Stanford’s response and agreed with Stanford. Dr. Schatzberg will take over as president of the association as planned, she said.

“The larger issue here is that there’s a revolution going on” in how medicine handles industry money, said Dr. Stotland, a psychiatrist at Rush Medical College in Chicago. “That’s good, that’s what we need, and I believe we’ve been on the cutting edge of that revolution in many ways.”

Dr. Stotland said that the association began reviewing the income it received from pharmaceutical companies last March, to identify potential conflicts. Doctors and academic researchers generally worked at arm’s length from industry until the early 1980s, when Congress passed the Bayh-Dole Act. This legislation encouraged closer collaboration between researchers and industry to bring products to market more quickly. The act helped foster the growth of the biotech industry, and soon professors and universities were busy obtaining patents and building relationships with industry.

Some psychiatrists have long argued that consulting with a company ”” to help design a rigorous drug trial, for instance ”” benefits patients, as long as the researcher has no financial stake in the product and is not paid to speak about the drug to other doctors, like a traveling pitchman.

Others say industry and academic researchers are now so deeply intertwined that exposing doctors’ private arrangements only stokes suspicion without correcting the real problem: bias.

“Having everyone stand up like a Boy Scout and make a pledge isn’t going to quell suspicion,” said Dr. Donald Klein, an emeritus professor at Columbia, who has consulted with drug makers himself. “The only hope to rule out bias is to have open access to all data that’s produced in studies and know that there are people checking it” who are not on that company’s payroll.

Studies have shown that researchers who are paid by a company are more likely to report positive findings when evaluating that company’s drugs. The private deals can directly affect patient care, said Dr. William Niederhut, a psychiatrist in private practice in Denver who receives no industry money.

“It’s a sales pitch, and now it’s looking like a whole lot of people would have done better if they’d started on lithium in the first place,” Dr. Niederhut said in a telephone interview. “The profession absolutely has to come clean on these industry deals, and soon.”

Tighter rules, stronger statements and more debate may not make much difference, if Mr. Grassley’s findings are any guide. Universities have rules requiring that faculty members disclose their outside income so that conflicts of interest in research or patient care can be managed. But some of the psychiatrists named in the investigations apparently ignored the rules.

“I think we may be coming to a point where hospitals and medical schools have to get serious about sanctioning,” said Dr. Paul S. Appelbaum, director of the division of psychiatry, medicine and the law at Columbia. “You can suspend doctors’ privileges, or suspend their right to treat patients; both have a huge impact on income and career. But if you’re serious about these disclosure policies, you have to be willing to back them up.”