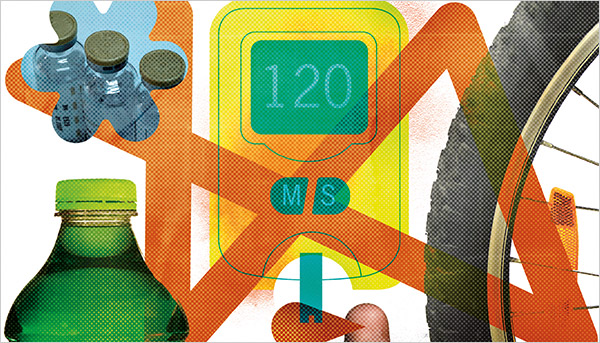 “…  intense exercise causes their medication needs to drop 60 to 75 percent during the first days of the race. As the body adjusts in the later days of the race, the cyclists must generally increase their insulin injections.”

Last week, a team of eight cyclists completed the coast-to-coast bike marathon called the Race Across America in record time. It was quite an achievement under any circumstances, but what made it extraordinary was something all eight of them had in common: Type 1 diabetes.

Share your thoughts on this column at the Well blog.

The accomplishments of the cyclists, who have a corporate sponsor and ride as Team Type 1, have become a source of inspiration for the estimated three million Americans with Type 1 diabetes, and especially for worried parents confronting a diagnosis of the disease in their children.

But the victory also offers lessons for the rest of us, underlining the benefits of daily vigilance when it comes to health. Because people with Type 1 produce no insulin, they cannot survive without injecting it before each meal, and they must wear a monitor or test their blood several times a day to check their glucose levels. Meals, snacks, exercise and medication are carefully balanced. This meticulous regimen is necessary to prevent diabetes complications, which can include kidney failure, blindness and death. But closely controlling blood sugar can also result in an enviable level of weight management and overall health.

“We’re showing people that diabetes is our strength, and because of it we can do some pretty amazing things,” said Phil Southerland, 27, a cyclist and runner from Atlanta who founded the team with another cyclist with Type 1, Joe Eldridge. (Both men rode in the race in 2006 and 2007, but did not compete this year.)

“I think the rest of the world can look at the team,” Mr. Southerland continued, “and say: ”˜These guys just won a bike race, and they did it with diabetes. What can I do with my life to live a healthier, better life?’ ”

The achievements of the Type 1 athletes come at a time of growing concern about changing patterns of the disease. While Type 2 diabetes is associated with an unhealthy lifestyle, scientists do not yet know what causes Type 1, although autoimmune, genetic and environmental factors appear to play a role.

With obesity and poor health habits rising among adults and children alike, it is hardly surprising that Type 2 diabetes has grown so prevalent. But now European health officials are reporting an inexplicable rise in Type 1 as well. Last month, the medical journal Lancet reported that the incidence was rising about 4 percent a year among European children, particularly those under 5. At that rate, the number of Type 1 cases will increase 70 percent in the next decade. And the disease also appears to be gaining in the United States.

The rapid rise suggests environmental influences, and researchers are looking at possible factors that include Caesarean deliveries, viral infection and early-life nutrition, including Vitamin D deficiency.

Type 1 diabetes has many faces. Perhaps the most prominent spokeswoman is Mary Tyler Moore, now 72; President Obama‘s nominee for a vacancy on the Supreme Court, Judge Sonia Sotomayor, 55, was given a Type 1 diagnosis when she was 8.

And Jay Cutler, the star quarterback who was recently traded to the Chicago Bears, learned he had Type 1 at 24, after a rapid 35-pound weight loss and severe fatigue originally attributed to stress. A team physical finally led to a diagnosis.

“When I found out I think I was more relieved than anything else, just to know it could be managed,” Cutler said in an interview. “You feel sorry for yourself for a little bit, but you come to terms with it.”

Now when Cutler heads to the sidelines during practices or a game, he is met by a trainer who checks his blood sugar to make sure it hasn’t dropped to a risky level.

“The trainer is there with my meter, they prick it, do the whole thing, tell me my number,” he said. “If we’re good, we keep going. If I’m getting a little low I take some Gatorade.”

During the Race Across America, the Team Type 1 cyclists wore glucose monitors and traveled with a doctor, eating or drinking when blood sugar levels begin to drop. While all the athletes must take insulin regularly to prevent high blood sugar, the intense exercise causes their medication needs to drop 60 to 75 percent during the first days of the race. As the body adjusts in the later days of the race, the cyclists must generally increase their insulin injections.

To complete the race, the cyclists divided into two teams of four. The first four riders took turns pedaling at full sprint for 10 to 15 minutes at a time, meaning each individual rider took only a short break before having to ride again. After about 150 miles of tag-team racing, the exhausted cyclists met up with the second set of four riders, who took over, giving the first riders time to eat and rest before they started again.

Despite mechanical problems, the team, which started in Oceanside, Calif., rolled into Annapolis, Md., a distance of 3,021 miles, in five days, nine hours and five minutes. Their average speed was 23.41 miles per hour ”” 0.17 better than the winner last year, a Norwegian cycling team made up of professionals.