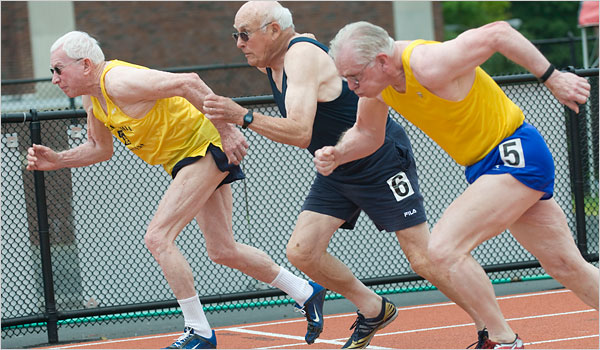 In his apartment outside Philadelphia, Frank Levine pulled a list of prescription medications from his refrigerator, his hands shaking slightly. There was metformin HCl and glipizide for his diabetes; lisinopril for his blood pressure; and Viagra.

Mr. Levine, who is 95 and has had operations on both knees, in June set the American record in the 400-meter dash for men aged 95 to 99, only to see it broken at the U.S.A. Masters Outdoor Track & Field Championships a few weeks later. “Nothing counts unless you’re first,” he said.

Mr. Levine belongs to a generation of track and field athletes who are breaking records for speed, distance and endurance at ages once considered too old for competition. In a sport tarnished by doping scandals, the older athletes raise anew the question of what constitutes a natural body for people who are at an age when drugs are a part of life.

“Who’s 75 years old and not taking medications?” asked Gary Snyder, national chairman of U.S.A. Track & Field’s masters committee, which will oversee more than 100 competitions this year for athletes over age 30.

Most drugs like Mr. Levine’s are not banned for competitors, but some common treatments for asthma, menopause and inflammation contain steroids that can disqualify athletes if they do not get written medical exemptions.

“I’m sure there are folks taking something like Manny,” Mr. Snyder said, referring to Manny Ramirez, the baseball player for the Los Angeles Dodgers who this year was suspended 50 games for violating the sport’s drug policy. “But most are using drugs for medical reasons.”

Ray Feick, 77, said he suspected “two or three” peers of using steroids to enhance their performance, including one shot-putter who suddenly was able to beat him. “My buddies and I talk about it,” he said. “It’s not fair to the age bracket and not fair to their body. And one by one, they drop out.”

U.S.A. Track & Field, the sport’s governing body, has a zero tolerance policy for doping but does not test for drugs at masters events because it is too expensive ”” about $500 per athlete and another $10,000 to take a testing organization to the meet, Mr. Snyder said.

But there is testing at the World Masters Championship, which took place this year in Lahti, Finland, in late July and early August. In 1999, the American sprinter Kathy Jager, 56, was stripped of her medals and barred from competition for two years after she tested positive for anabolic steroids, which she ascribed to her use of a popular menopause treatment called Estratest HS.

“When we set records, the Europeans look at us like, ”˜Oh sure, so-and-so is taking stuff,’ ” Mr. Snyder said.

For Rosalyn Katz, 67, a thrower from Queens who said she did not take any medications, the question of drug use is beside the point. On a recent morning, Ms. Katz, a retired school administrator, and her training partner, Neni Lewis, 49, were throwing heavy weights in a city park. Ms. Lewis’s hammer throw hooked too far to the left and hung from a tree branch like a 9-pound Christmas ornament. The two women throw before 7 a.m. twice a week, all year round.

“I don’t think anyone taking asthma medication is going to throw or run any better,” Ms. Katz said. “I think they’re doing it because they can’t breathe.”

Like many other women who compete past age 60, Ms. Katz said she had not had a track and field program available to her in high school and college and had never thrown until she was close to 50.

Mr. Levine, similarly, did not start running until he was 65. With his wife in a nursing home, a friend suggested running together, then training for a marathon. He ran 18 marathons before dropping to shorter distances. He said he did not think his peers took drugs except medicinally.

Of his accomplishments as an older athlete, he said: “I’m disappointed rather than amazed, because my times have slowed up considerably. I feel good. So the body has slowed.”

In his youth, Mr. Levine won a Golden Gloves flyweight boxing title, and his competitive juices have not let up. At his apartment building he recently greeted a visitor by asking, “Do you want to take the stairs or the elevator?” He lives on the seventh floor.

In masters competitions, athletes are grouped in five-year age brackets. Mr. Levine has just graduated into the 95 to 99 class, which he views as an advantage since he is now the kid in the bracket. “It makes you look forward to getting older,” he said.

The Rev. Champion Goldy, 92, a runner and thrower from Haddonfield, N.J., said his goal was to run the 100-meter dash when he was 100. Mr. Goldy, a Methodist minister, said he relished the camaraderie on the circuit but dreaded the inevitable absences at meets.

In 2002, Mr. Goldy ran the 100-meter dash with a centenarian named Everett Hosack. Mr. Goldy said that as they got in their stances, he told Mr. Hosack, who died in 2004, “Everett, you better get down here and get this race started.”

Even with the camaraderie, though, there is occasional distrust. Tom Rice, 81, said he was put off by seeing peers with suspiciously muscular builds.

“I said, how ridiculous is that ”” they’ve got to be taking something,” said Mr. Rice, who takes Zocor for high cholesterol and hydrochlorothiazide for high blood pressure, neither of which is banned.

“I can’t even imagine that at this age,” he said. “It’s not the Olympics. Guys get so whacked out that they want to take pills to destroy their health just so they can get a medal that’s a little bit better than they might have earned.”

Yet even for clean athletes, the goal is to exceed what people expect of older bodies. After setting the age-group record in the 400-meter run in 3 minutes 20 seconds at the regional championships in East Stroudsburg, Pa., on June 27 ”” Michael Johnson holds the world record at 43.18 seconds ”” Mr. Levine was exhausted and elated.

“Everything I can do, I did,” he said. “Every ounce of strength, every mental effort. In my mind, if I knew it was a possibility that I would die because I was speeding or pushing, I think I would do it. Stupidity, but I think that’s true of a lot of athletes.”