Scandalous rumors about popular musicians were just as lurid in the 18th century as they are today, but they moved at a more deliberate pace. Wolfgang Amadeus Mozart died on Dec. 5, 1791, and it took a whole week for a Berlin newspaper to announce that he had been poisoned. The actual cause of death, a new study suggests, may have been more pedestrian: a strep infection. 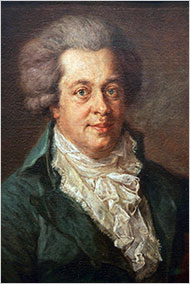 RUMORS Wolfgang Amadeus Mozart died after a sudden illness in 1791.

Mozart had returned to Vienna from a trip to Prague in September, completed the score of “The Magic Flute,” conducted its premiere, visited Baden, Germany, where his wife was taking the waters, and started writing the Requiem. He was evidently active and in good health. Then on Nov. 22, two days after his last public performance, he fell ill.

Poisoning was only the first of many theories about what could have killed the 35-year-old composer at the height of his powers. Although several people witnessed his death, most recorded their recollections many years later. His sister-in-law recalled that Mozart’s body was very swollen, so much so that he was unable to turn in bed, and that he had a high fever, for which the attending physician ordered cold compresses. He lost consciousness and died early on Dec. 5. The cause of death was recorded as “fever and rash,” which even in the 18th century were considered symptoms, not a disease.

Many causes have been suggested over the centuries: syphilis, the effects of treatment with salts of mercury, rheumatic fever, vasculitis leading to renal failure, infection from a bloodletting procedure, trichinosis from eating undercooked pork chops.

Now researchers writing in the Aug. 18 issue of The Annals of Internal Medicine have done an epidemiological analysis that suggests he was a victim of an epidemic streptococcal infection.

“Like those before us, we’ve taken into account all the signs and symptoms,” said Dr. Richard H. C. Zegers, the lead author, “but we also have looked at one of the most logical additional things: what people commonly died from in Vienna at the time of Mozart.”

Deaths were routinely recorded in 18th-century Vienna, but physicians were not required to note a cause, which was usually provided by relatives or the clerk doing the paperwork. These records have survived, and the researchers used them to figure out patterns of death in the months surrounding Mozart’s final illness ”” November and December 1791 and January 1792 ”” and compare them with the patterns in the same periods of the previous and following years.

The scientists found 5,011 deaths of people 18 and older over the nine months. The most common causes were tuberculosis, malnutrition, edema (swelling of tissue under the skin), gastrointestinal disease and cerebrovascular disease, the blood vessel disorder that leads to stroke. But in the winter of 1791-92, edema was the only cause that showed an increased incidence among younger men compared with the other years, suggesting a small epidemic of infectious disease. Edema is also associated with certain chronic diseases of the kidneys and heart, but Mozart’s sickness was sudden.

In addition to the edema, Mozart had malaise, back pain and a rash, all symptoms of streptococcal infection. Streptococcus is sometimes followed by an acute kidney disease called glomerulonephritis, which would explain the severe swelling.

Dr. Zegers, an ophthalmologist at the University of Amsterdam, said a description of symptoms alone can never be definitive, because many diseases have similar symptoms. He views the added epidemiological information as crucial. “It will take several years, or maybe longer,” he said, “before anyone can come up with a better diagnosis than this one.”