Dr. Weeks’ Comment:  Now what?         What reforms are in store for the revolving door ethic between industry and the government?

WASHINGTON ”” The Food and Drug Administration said Thursday that four New Jersey congressmen and its own former commissioner unduly influenced the process that led to its decision last year to approve a patch for injured knees, an approval it is now revisiting. 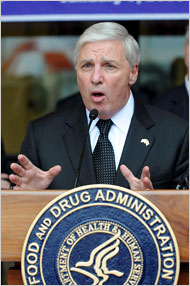 The agency’s scientific reviewers repeatedly and unanimously over many years decided that the device, known as Menaflex and manufactured by ReGen Biologics Inc., was unsafe because the device often failed, forcing patients to get another operation.But after receiving what an F.D.A. report described as “extreme,” “unusual” and persistent pressure from four Democrats from New Jersey ”” Senators Robert Menendez and Frank R. Lautenberg and Representatives Frank Pallone Jr. and Steven R. Rothman ”” agency managers overruled the scientists and approved the device for sale in December.

All four legislators made their inquiries within a few months of receiving significant campaign contributions from ReGen, which is based in New Jersey, but all said they had acted appropriately and were not influenced by the money. Dr. Andrew C. von Eschenbach, the former drug agency’s commissioner, said he had acted properly.

The agency has never before publicly questioned the process behind one of its approvals, never admitted that a regulatory decision was influenced by politics, and never accused a former commissioner of questionable conduct.

“The message here is that there were problems with the integrity of F.D.A.’s decision-making process that have solutions,” Dr. Joshua Sharfstein, the agency’s principal deputy commissioner, said in a conference call with reporters.

Dr. Sharfstein said that patients in the United States who had already received the $3,000 device should wait for the agency’s review of the device’s approval and urged them “not to panic.”

Gerald E. Bisbee Jr., chairman and chief executive of ReGen, said that Menaflex was safe and described as “inaccurate” many of the agency’s characterizations of the device’s approval. Thirty patients in the United States and nearly 3,000 in Europe have received the device, and ReGen has trained up to 140 surgeons in the United States to use it. He defended the company’s appeal to lawmakers.

Menaflex is a C-shaped pad used to repair a torn or damaged meniscus, the cushion between knee bones. A clinical trial of the device failed to show that it worked any better than routine surgery.

The report, written by top agency officials, said that Dr. von Eschenbach, who resigned as F.D.A. commissioner in January, became as a result of political pressure “personally engaged in the details of a process usually coordinated” by scientific staff. One agency manager concluded that Dr. von Eschenbach “was demanding not only an expedited process but also an outcome in favor of ReGen,” the report stated.

“Congressional interest in the ReGen matter ”” and the unusual responsiveness of the commissioner to that interest ”” initiated a chaotic new phase in the agency’s handling of the” company’s application, the report said.

In an interview Thursday, Dr. von Eschenbach defended his actions.

“My responsibility as that process was coming to a close was to make sure that it was continued in an orderly and appropriate fashion, and that’s what I believe I did,” he said.

The F.D.A.’s report said that its Office of Legislation began receiving calls from members of Congress in December 2007 complaining about its review of the device, and the office’s director “described the pressure from the Hill as the most extreme he had seen.”

All four members of Congress denied that ReGen’s political contributions had played any role in their efforts on its behalf with the F.D.A. and said they were merely doing their jobs by trying to help a constituent company.

The four representatives received a total of $26,000 from three ReGen executives beginning in October 2007, according to OpenSecrets.org. The donations began with $2,000 to a political action committee controlled by Mr. Menendez, the New Millennium PAC, on Oct. 28, 2007. Mr. Menendez received another $7,100 for his campaign account in March 2008.

Afshin Mohamadi, a spokesman for Mr. Menendez, said the senator’s “contact with the F.D.A. was to help to ensure that the agency was communicating clearly with the company and to help ensure a fair process.”

Mr. Rothman, who represents Hackensack, where ReGen is based, said in a statement that the company felt it was being “treated unfairly” and that “today’s report makes it clear that the F.D.A. made mistakes and communicated poorly with ReGen.”

Caley Gray, a spokesman for Mr. Lautenberg, emphasized that the senator “never made any calls or contacts” to ReGen Biologics, but did sign a letter along with other members of the New Jersey delegation. Mr. Lautenberg received $2,300 in May 2008 from a ReGen executive.

On Wednesday, the agency asked the Institute of Medicine to review the entire process by which the agency approves the vast majority of medical devices. The agency report was deeply critical of its device approval process and said that confusion over basic rules and how to resolve differences among reviewers was rife. For decades, most medical devices have received only cursory reviews of their safety and efficacy from the agency.

For equipment like bed pans and shower curtains, experts agree that quick appraisals are appropriate. But the medical device industry is producing more and more complex machinery like pacemakers and stents.

In January, the Government Accountability Office concluded that it was long past time that the agency demanded that manufacturers prove that all complex devices are safe and effective before being approved for sale.

Dr. David R. Schmidt, the knee surgeon for the San Antonio Spurs, said he was involved in the original clinical trial of ReGen’s Menaflex device and concluded that patients did not benefit. He said he was surprised that the F.D.A. approved it.