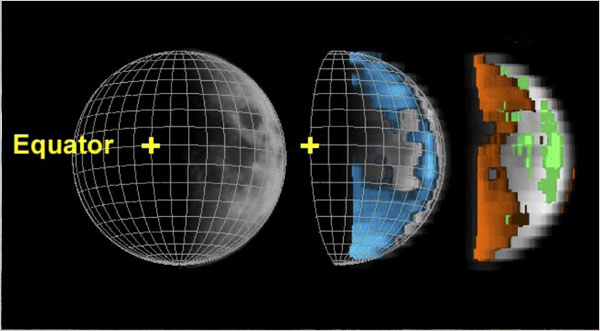 Images of the Moon captured in 1999 by the Cassini spacecraft show regions of trace surface water (blue) and hydroxyl (orange and green).

There appears to be, to the surprise of planetary scientists, water, water everywhere on the Moon, although how many drops future astronauts might be able to drink is not clear.

Lunar Craters May Be Chilliest Spots in Solar System (September 18, 2009)

Data from three spacecraft indicate the widespread presence of water or hydroxyl, a molecule consisting of one hydrogen atom and one oxygen atom as opposed to the two hydrogen and one oxygen atoms that make up a water molecule. The discoveries are being published Thursday on the Web site of the journal Science.

“It’s so startling because it’s so pervasive,” said Lawrence A. Taylor of the University of Tennessee, Knoxville, a co-author of one of the papers that analyzed data from a National Aeronautics and Space Administration instrument aboard India’s Chandrayaan-1 satellite. “It’s like somebody painted the globe.”

For decades, the Moon has been regarded as a completely dry place. The dark side is more than ice cold, but when it passes into sunlight, any ice should have long ago been baked away. The possible exceptions are permanently shadowed craters near the Moon’s poles, and data announced this month by NASA verified the presence of hydrogen in those areas, which would most likely be in the form of water.

If water is somehow more widespread, that could make future settlement of the Moon easier, especially if significant water could be extracted just by heating the soil. Oxygen would also be a key component for breathable air for astronauts, and hydrogen and oxygen can also be used for rocket fuel or power generation.

Samples of lunar soil brought back from NASA’s Apollo missions about four decades ago actually did show signs of water, but most scientists working with the samples, including Dr. Taylor, dismissed the readings as contamination from humid Houston air that seeped in before the rocks were analyzed at NASA’s Johnson Space Center.

“I was one of the ones back in the Apollo days that was firmly against lunar water,” Dr. Taylor said.

Now he is convinced he was wrong. “I’ve eaten my shorts,” he said.

The Chandrayaan-1 data looked at sunlight reflected off the Moon’s surface and found a dip at a wavelength where water and hydroxyl absorb infrared light. Dr. Taylor estimated the concentration at about one quart of water per cubic yard of lunar soil and rock.

Meanwhile, Roger N. Clark of the United States Geological Survey analyzed decade-old data from NASA’s Cassini spacecraft when it passed the Moon en route to Saturn. He, too, found signs of water or hydroxyl, mostly at the poles, but also at lower latitudes.

Scientists working with the Deep Impact spacecraft, which later studied the Comet Tempel 1, also found infrared absorption at the water and hydroxyl wavelengths. More interesting, the amount of absorption ”” and thus the quantity of water ”” varied with temperature.

That suggests the water is being created when protons from the solar wind slam into the lunar surface. The collisions may free oxygen atoms in the minerals and allow them to recombine with protons and electrons to form water.

Lori M. Feaga, a research scientist at the University of Maryland who is a member of the team that analyzed the Deep Impact data, said this process would work only to about one millimeter into the lunar surface. If correct, that would not give future astronauts much to drink.

“You would have to scrape the area of a baseball field or a football field to get one quart of water,” she said.