Dr. Weeks’ Comment:    We know that the light emitting device (FED) in the screen on your computer is screwing with your hormones, genes, genetic future in general and your melatonin and ability to sleep in particular, but now – the havoc is more clearly described:

Your Brain on Computers 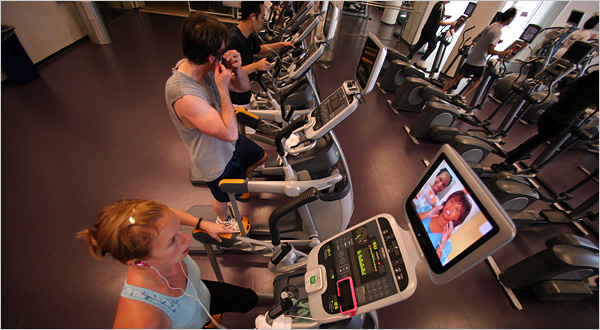 Rhiana Maidenberg listened to an audio book on her mobile phone while watching television during a workout in San Francisco.

SAN FRANCISCO ”” It’s 1 p.m. on a Thursday and Dianne Bates, 40, juggles three screens. She listens to a few songs on her iPod, then taps out a quick e-mail on her iPhone and turns her attention to the high-definition television.

Your Brain on Computers

Break Time vs. Screen TimeArticles in this series examine how a deluge of data can affect the way people think and behave.

Just another day at the gym.

As Ms. Bates multitasks, she is also churning her legs in fast loops on an elliptical machine in a downtown fitness center. She is in good company. In gyms and elsewhere, people use phones and other electronic devices to get work done ”” and as a reliable antidote to boredom.

Cellphones, which in the last few years have become full-fledged computers with high-speed Internet connections, let people relieve the tedium of exercising, the grocery store line, stoplights or lulls in the dinner conversation.

The technology makes the tiniest windows of time entertaining, and potentially productive. But scientists point to an unanticipated side effect: when people keep their brains busy with digital input, they are forfeiting downtime that could allow them to better learn and remember information, or come up with new ideas.

Ms. Bates, for example, might be clearer-headed if she went for a run outside, away from her devices, research suggests.

At the University of California, San Francisco, scientists have found that when rats have a new experience, like exploring an unfamiliar area, their brains show new patterns of activity. But only when the rats take a break from their exploration do they process those patterns in a way that seems to create a persistent memory of the experience.

The researchers suspect that the findings also apply to how humans learn.

“Almost certainly, downtime lets the brain go over experiences it’s had, solidify them and turn them into permanent long-term memories,” said Loren Frank, assistant professor in the department of physiology at the university, where he specializes in learning and memory. He said he believed that when the brain was constantly stimulated, “you prevent this learning process.”

At the University of Michigan, a study found that people learned significantly better after a walk in nature than after a walk in a dense urban environment, suggesting that processing a barrage of information leaves people fatigued.

Even though people feel entertained, even relaxed, when they multitask while exercising, or pass a moment at the bus stop by catching a quick video clip, they might be taxing their brains, scientists say.

Regardless, there is now a whole industry of mobile software developers competing to help people scratch the entertainment itch. Flurry, a company that tracks the use of apps, has found that mobile games are typically played for 6.3 minutes, but that many are played for much shorter intervals. One popular game that involves stacking blocks gets played for 2.2 minutes on average.

“Instead of having long relaxing breaks, like taking two hours for lunch, we have a lot of these micro-moments,” he said. Game makers like Electronic Arts, he added, “have reinvented the game experience to fit into micro-moments.”

Many business people, of course, have good reason to be constantly checking their phones. But this can take a mental toll. Henry Chen, 26, a self-employed auto mechanic in San Francisco, has mixed feelings about his BlackBerry habits.

“I check it a lot, whenever there is downtime,” Mr. Chen said. Moments earlier, he was texting with a friend while he stood in line at a bagel shop; he stopped only when the woman behind the counter interrupted him to ask for his order.

Mr. Chen, who recently started his business, doesn’t want to miss a potential customer. Yet he says that since he upgraded his phone a year ago to a feature-rich BlackBerry, he can feel stressed out by what he described as internal pressure to constantly stay in contact.    see