Dr. Weeks’ Comment:   The power and benefits of the free market-  Wal-Mart providing a great service. Now – encourage  them to go ORGANIC. 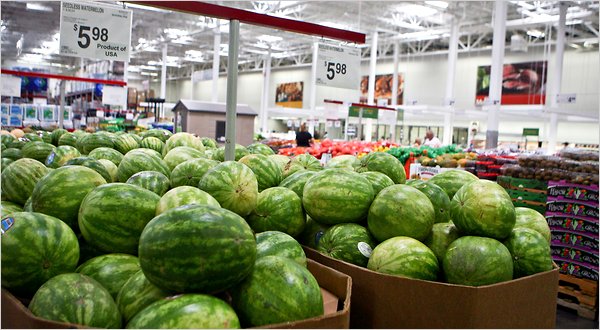 The expanded produce section at a Sam’s Club, which is owned by Wal-Mart, in Rogers, Ark.

The program is intended to put more locally grown food in Wal-Mart stores in the United States, invest in training and infrastructure for small and medium-size farmers, particularly in emerging markets, and begin to measure the efficiency of large suppliers in growing and getting their produce to market.

Given that Wal-Mart is the world’s largest grocer, with one of the biggest supply chains, any changes that it makes would have wide implications. Wal-Mart’s decision five years ago to set sustainability goals that, among other things, increased its reliance on renewable energy and reduced packaging waste among its supplies, sent broad ripples through product manufacturers. Large companies like Procter & Gamble redesigned packages that are now carried by other retailers, while Wal-Mart’s measurements of environmental efficiency among its suppliers helped define how they needed to change.

“No other retailer has the ability to make more of a difference than Wal-Mart,” the retailer’s president and chief executive, Michael T. Duke, said in remarks prepared for a meeting Thursday morning. “Grocery is more than half of Wal-Mart’s business. Yet only four of our 39 public sustainability goals address food.”

Wal-Mart said it expected to meet the goals by the end of 2015.

In the United States, Wal-Mart plans to double the percentage of locally grown produce, to 9 percent. Wal-Mart defines local produce as that grown and sold in the same state. Still, the program is far less ambitious than in some other countries ”” in Canada, for instance, Wal-Mart expects to buy 30 percent of produce locally by the end of 2013, and, when local produce is available, increase that to 100 percent.

In emerging markets, Wal-Mart has pledged to sell $1 billion of food from small and medium farmers (which it defines as farmers with fewer than 20 hectares, about 50 acres). It will also provide training for the farmers and their laborers on how to choose crops that are in demand as well as the proper application of water and pesticides.

Both in the United States and globally, Wal-Mart will invest more than $1 billion to improve its perishable supply chain. For example, if trucks, trains and distribution centers could help farmers in Minnesota get crops to Wal-Mart more quickly, the result would be less spoiled food, a longer shelf life and presumably more profit for both the farmer and for Wal-Mart. Wal-Mart said it planned to reduce food waste in emerging-market stores by 15 percent, and in other stores by 10 percent.

As it did in the environmental arena, it will begin creating an agriculture-specific index to measure waste and efficiency among produce suppliers. It will be asking its biggest producers to answer questions about water, fertilizer and chemical use. The eventual goal is to include that information in a sustainability rating that customers would see, so they could decide whether to choose one avocado over another based on how much waste it had created. Wal-Mart would also use the information when it decides from whom to buy.

Finally, it announced specific sourcing guidelines, including that sustainably sourced palm oil be used in all its private-label products (the Wal-Mart house brands) and that any beef it sells not contribute to the deforestation of the Amazon because of cattle-ranching expansion.

“When we do this on Wal-Mart’s scale, we can deliver a global food supply that improves health and livelihoods around the world,” Leslie A. Dach, executive vice president for corporate affairs, said in prepared remarks.

While the overall goals include Sam’s Club, the warehouse store wing of Wal-Mart, that division also has other specific goals. Those include increasing sales of fair-trade certified produce and flowers by 15 percent, requiring all seafood suppliers to become certified as sustainable, and reducing food waste in clubs and distribution centers by 11 percent a year.

Environmental and agricultural specialists who worked with Wal-Mart on the program said a few items stood out.

Beginning to measure how farms produced food, with the sustainability index, was a big step, they said.

“The impact of not just Wal-Mart but the entire food and agricultural sector starting to define what is acceptable practice in their supply chain, and then what is unacceptable practice, will move agricultural producers en masse,” said Marty Matlock, a professor of ecological engineering at the University of Arkansas. “The index represents a real number that will mean improvement on the ground: improving ecosystem health, soil health and food quality.”

“This is huge,” said Michelle Mauthe Harvey, project manager for the corporate partnerships program at Environmental Defense Fund. “Once people are asked those questions, if they haven’t been measuring, they measure more.”

“Knowing what’s embedded in the food before it ever leaves the farm is really significant, because then you can begin to embrace better practices, you can begin to identify opportunities for improvement.”

Ms. Harvey said the investment in infrastructure was also a big step forward.

“The majority of efforts have tended toward some local sourcing, and you had a fairly active effort around organics” among other grocers, Ms. Harvey said, but there was a gap between support for local farmers and how those farmers would find transportation or warehouses for their food.

“Our agricultural system over the last three to four decades, as we’ve moved to reliance on key locations like California and Florida,” she said, “we’ve made it very difficult for local farmers to actually get their food to market.”