Times Square had the ball drop, and Brasstown, N.C., had its descending possum. But no place had a New Year’s Eve as unusual, or freakishly disturbing, as Beebe, Ark.

Thousands of red-winged blackbirds fell dead from the sky in Beebe, Ark., on New Year’s Eve. They may have been startled by fireworks, officials say. 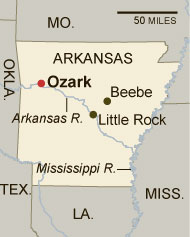 A worker with U.S. Environmental Services, a private contractor, picked up a dead bird on Saturday.

Around 11 that night, thousands of red-winged blackbirds began falling out of the sky over this small city about 35 miles northeast of Little Rock. They landed on roofs, roads, front lawns and backyards, turning the ground nearly black and terrifying anyone who happened to be outside.

“One of them almost hit my best friend in the head,” said Christy Stephens, who was standing outside among the smoking crowd at a party. “We went inside after that.”

The cause is still being determined, but preliminary lab results from the Arkansas Livestock and Poultry Commission revealed “acute physical trauma” in samples of the dead birds. There were no indications of disease, though tests were still being done for the presence of toxic chemicals.

Karen Rowe, the bird conservation program coordinator for the Arkansas Game and Fish Commission, said the prevailing theory was that the birds had been startled by New Year’s Eve fireworks and suddenly dispersed, flying low enough to run into chimneys, houses and trees. Pyrotechnics are used to scatter blackbirds for bird control, though only during the day, given the birds’ poor vision.

Beebe (pronounced BE-be) is a congregating spot for blackbirds, and one witness told Ms. Rowe that he saw the birds roosting earlier in the day and heard them again at night just after the fireworks started.

“It was the right mix of things happening in a perfect time sequence,” Ms. Rowe said.

At most recent count, up to 5,000 birds fell on the city. Sixty five samples were sent to labs, one of which is at the Livestock and Poultry Commission and the other in Madison, Wis.

Keith Stephens, a spokesman for the commission, said he was not aware of a case this large. “About nine years ago we had some ducks,” he said, “but that was only a couple of dozen.”

The town contacted an environmental cleanup firm, which by Monday afternoon had picked up nearly all the birds, some of which were bagged and left at the end of driveways by residents.

“It just looked as if it had rained birds,” said Tracy Lightfoot, a member of the City Council, declining to speculate on the reason. “There’s lots of theories running around. I have no idea. I just don’t have a clue.”

State scientists believe one thing to be almost certain: that the bird deaths were not related to the roughly 85,000 fish that died a few days before near Ozark, in the western part of the state, the biggest fish kill in Arkansas that anyone can remember. They were spotted by anglers along the Arkansas River last week and reported to the Game and Fish Commission, which spent New Year’s Eve measuring and counting dead fish that had spread out for nearly 20 miles.

In that case, the victims were almost all drum, and almost all younger ones. That suggests the culprit was disease, said Mark Oliver, the chief of fisheries for the commission. He said fish kills were not uncommon, especially in winter when the fish are packed more closely, but he did not recall one of this size.

Meanwhile roughly 500 dead birds were found on Monday outside New Roads, La. Those birds were much more varied, with starlings and grackle in addition to blackbirds, and a few samples picked up by James LaCour, a wildlife veterinarian with the Louisiana Department of Wildlife and Fisheries, did not show any signs of trauma, he said.