Anyone can use ‘blood libel’ – even Sarah Palin | Alan Dershowitz | Comment is free | guardian.co.uk

Anyone can use ‘blood libel’ – even Sarah Palin

I’m no Palin supporter, but no ethnic or religious group should claim ownership of language that might silence free speech 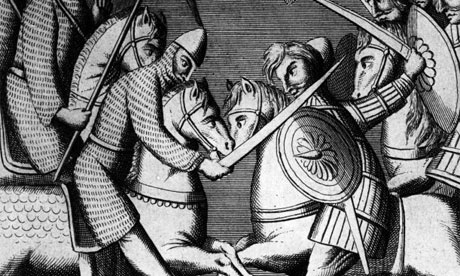 A painted window of a 12th-century French abbey illustrating the armour, banners and weapons of the first crusaders. Terms like ‘crusade’, ‘crusaders’, ‘inquisition’, ‘jihad’ and even ‘blood libel’ have become detached from their original meaning and have passed into general metaphorical usage, argues Alan Dershowitz. Photograph: Hulton Archive/Getty Images As a lifelong liberal Democrat, I am no political supporter of Sarah Palin. I also oppose her use of rifle sight crosshairs as political symbols. Yet, I have no problem with her use of the term “blood libel” to characterise what she perceives to be false charges that her rhetoric and symbols were partly responsible for the deaths and mayhem in Tucson.

The term blood libel has taken on a broad metaphorical meaning in public discourse. Although its historical origins are rooted in theologically based false accusations against the Jewish people and individual Jews, its current usage is far broader. I myself have used it to describe what I believe to be false accusations against the state of Israel by the Goldstone report. The fact that two of the victims are Jewish is irrelevant to the propriety of using this widely-referenced term.

Nor does the term “blood libel” stand alone as a theologically rooted term that has taken on metaphorical status. The word “crucifixion”, central to Christian theology, has long been used politically. William Jennings Bryan famously ran for office on the slogan “Do not crucify mankind on a cross of gold.” Similarly, the word “crusade”, which has darker theological implications, has been used to signify any large-scale military or ideological attack. Dwight Eisenhower used that term in the title of his memoir, and some Catholic athletic teams call themselves the Crusaders. (Although I personally disagree with glorifying the horrible crusades against Muslims and Jews, I recognise that the terms have lost its original meaning.) “Inquisition”, too, has become a generally accepted term describing an unfair investigation or interrogation.

The only term that seems to have preserved its unique status is “the Holocaust”, perhaps because of the recency of the horrors it inflicted on so many. (To be sure, there are those – particularly some strident enemies of Israel – who throw around even this term promiscuously, but they are rightly condemned by reasonable people.)

The term “blood libel” is now used to characterise any false accusation that relates to the killing of human beings. Sarah Palin was accused of being responsible for the death and wounding of multiple human beings. She reasonably believes that accusation to be false in fact and politically inspired. She is entitled, in my view, to use the term “blood libel” in the context of an accusation of responsibility for bloodletting, without regard to the religion or ethnicity of the perpetrator, the victims, the accusers or the accused.

Language changes over time by usage. Whether Palin was, or was not, aware of the theological roots of the term she used, she selected a phrase that has become commonplace. Jews no longer own it, any more than Christians own theological terms rooted in their religion, or Muslims own words like “jihad”, which have now assumed metaphorical status.

So, let’s stop trying to stifle debate in the name of political correctness, and let’s stop pretending to be offended when people we disagree with use words commonly employed, without criticism, by people we agree with. No group owns the vocabulary of political discourse.

The murders in Tucson present us with a teaching moment, as many tragedies do. Full and complete debate should be encouraged not only about the multiple causes of any such tragedy, but also about how to prevent a recurrence. Diverting attention from these issues by undeserved accusations of antisemitism and insensitivity distracts from the central issues and chills openness of expression.