Cellphone use appears to increase brain activity in regions close to where the phone antenna is held against the head, according to a new study, but researchers said the implications for health are still unknown.

The study is the first to demonstrate that radiation from the devices has a direct impact on some brain cells, and is likely to fuel a long-running debate over the safety of cellular phones.

“This study shows that the human brain is sensitive to electromagnetic radiation coming out of cellphones,” said Nora Volkow, an author on the study published Tuesday in the Journal of the American Medical Association. “That is something we need to face.” 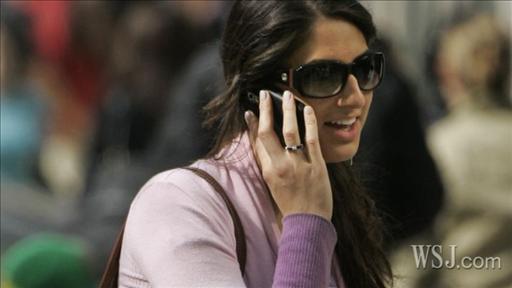 Shirley Wang has details of a just-released study indicating that cell phone use does have a direct impact on brain activity.

However, “our finding does not tell us if this is harmful or not,” said Dr. Volkow, who is head of the National Institute on Drug Abuse.

Some medical experts have been concerned for years about the possible long-term health consequences of frequent cellphone use. The city of San Francisco voted in June to require cellphone retailers to post the amount of radiation emitted by each phone because of the concern.

The Federal Communications Commission sets radiation exposure standards for wireless communication devices aimed at limiting the amount of radiation that is absorbed by the body, and determined that a safe limit for a cellphone user is 1.6 watts per kilogram, averaged over one gram of tissue, in the U.S. and slightly less restrictive in most other countries, according to the FCC’s website.

Results from studies looking at the health effects have been mixed. Some large-scale studies have found a link between cellphone use and brain cancer, but they haven’t been able to show that the cancer was caused by cellphone radiation.

The main concern is that radiation from phones could cause DNA mutations or changes to chemicals in the brain, leading to tumors or cognitive decline. But to date there is no known evidence that the frequency of the waves emitted from phones are powerful enough to cause such changes, according to Reto Huber, a professor at the University Children’s Hospital Zurich who has published several studies on electromagnetic fields and cellphones but wasn’t part of this latest study.

In Tuesday’s study, researchers from the National Institutes of Health in Bethesda, Md., and Brookhaven National Laboratory in New York measured glucose metabolism””how much sugar a cell takes in to fuel activity””in the brains of 47 adults, the largest study of its kind to date. 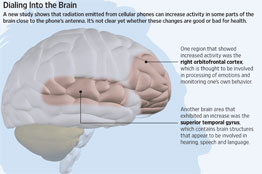 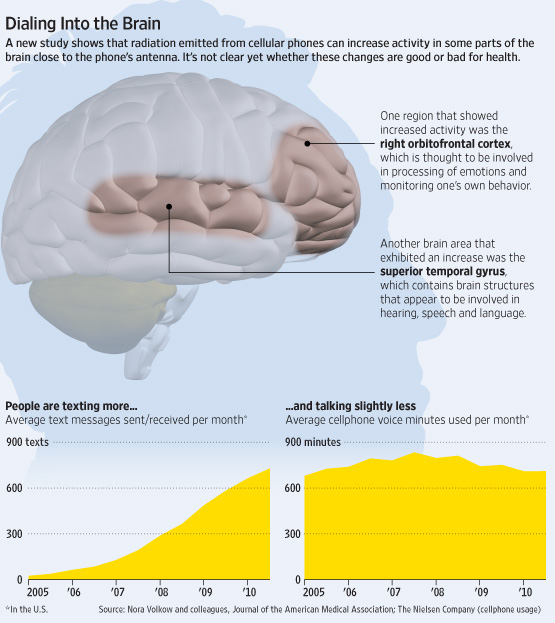 They conducted scans after subjects had cellphones held to their left and right sides for 50 minutes on two different days. The first day neither cellphone was turned on. The second day the right phone was activated but muted so the participants wouldn’t hear any noise. Because the participants didn’t know which phone was active, their expectations couldn’t skew the results.

The researchers found that some brain regions near the antenna became significantly more active when a cellphone was turned on and held to the ear, even though the participants didn’t speak or listen to a conversation, compared with when the phones weren’t activated.

The increase in brain activity in those regions was comparable to the increase in level of glucose metabolism used by the visual cortex when someone talks””about 8% to 10%, according to Dr. Volkow.

Dr. Huber’s group in Switzerland has conducted similar studies by measuring blood flow to brain regions””another indicator of brain activity””and found that there is an increase in flow to regions close to where the cellphone was held.

Mitchel Berger, a neuro-oncologist at the University of California, San Francisco, called the findings “very interesting and provocative” but said they don’t increase his concerns about the safety of cellphones.

“You could get confused very rapidly and think this finding is equated with a health hazard,” said Dr. Berger, who wasn’t involved in the study. “What it tells us is at the frequencies these phones currently generate, there are [brain] regions that are hyperactive.”

Nevertheless, “I think until we really understand the very long-term effects with these newer phones it’s not unreasonable to ask people to use headphones or speakers,” said Dr. Berger.

If there aren’t negative long-term effects, cellphones could be used as a non-invasive way to stimulate parts of the brain in a therapeutic sense, such as for depression treatment, said Dr. Volkow.