On Jan. 21, 1993, the television talk-show host Larry King featured an unexpected guest on his program. It was the evening after Inauguration Day in Washington, and the television audience tuned in expecting political commentary. But King turned, instead, to a young man from Florida, David Reynard, who had filed a tort claim against the cellphone manufacturer NEC and the carrier GTE Mobilnet, claiming that radiation from their phones caused or accelerated the growth of a brain tumor in his wife. 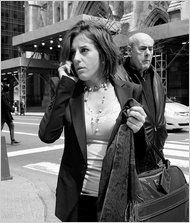 “The tumor was exactly in the pattern of the antenna,” Reynard told King. In 1989, Susan Elen Reynard, then 31, was told she had a malignant astrocytoma, a brain cancer that occurs in about 6,000 adults in America each year. To David Reynard, the shape and size of Susan’s tumor ”” a hazy line swerving from the left side of her midbrain to the hindbrain ”” uncannily resembled a malignant shadow of the phone (but tumors, like clouds, can assume the shapes of our imaginations). Suzy, as she was known, held her phone at precisely that angle against her left ear, her husband said. Reynard underwent surgery for her cancer but to little effect. She died in 1992, just short of her 34th birthday. David was convinced that high doses of radiation from the cellphone was the cause.

Reynard v. NEC ”” the first tort suit in the United States to claim a link between phone radiation and brain cancer ”” illustrated one of the most complex conceptual problems in cancer epidemiology. In principle, a risk factor and cancer can intersect in three ways. The first is arguably the simplest. When a rare form of cancer is associated with a rare exposure, the link between the risk and the cancer stands out starkly. The juxtaposition of the rare on the rare is like a statistical lunar eclipse, and the association can often be discerned accurately by observation alone. The discipline of cancer epidemiology originated in one such a confluence: in 1775, a London surgeon, Sir Percivall Pott, discovered that scrotal cancer was much more common in chimney sweeps than in the general population. The link between an unusual malignancy and an uncommon profession was so striking that Pott did not even need statistics to prove the association. Pott thus discovered one of the first clear links between an environmental substance ”” a “carcinogen” ”” and a particular subtype of cancer.

The opposite phenomenon occurs when a common exposure is associated with a common form of cancer: the association, rather than popping out, disappears into the background, like white noise. This peculiar form of a statistical vanishing act occurred famously with tobacco smoking and lung cancer. In the mid-1930s, smoking was becoming so common and lung cancer so prevalent that it was often impossible to definitively discern a statistical link between the two. Researchers wondered whether the intersection of the two phenomena was causal or accidental. Asked about the strikingly concomitant increases in lung cancer and smoking rates in the 1930s, Evarts Graham, a surgeon, countered dismissively that “the sale of nylon stockings” had also increased. Tobacco thus became the nylon stockings of cancer epidemiology ”” invisible as a carcinogen to many researchers, until it was later identified as a major cause of cancer through careful clinical studies in the 1950s and 1960s.