Dr. Weeks’ Comment:  These are the challenging paths down which our science leads. Tough for many men to read and sadly, tougher still for many women to take to heart.  “What the world needs now is LOVE.”  John Lennon

The brain science of the vagina heralds a new sexual revolution

Finally, women have the neuroscientific knowledge to liberate their bodies from patriarchy’s social control and culture of shame 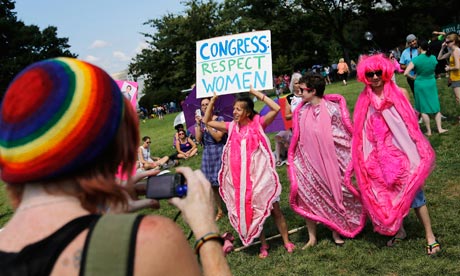 Activists in vagina costumes at a We Are Woman rally against conservative legislators in Washington, DC, on 18 August 2012. Photograph: Jonathan Ernst/Reuters

My new book, Vagina: A New Biography, has just come out in the UK – to a whirlwind of reaction. Why write about the vagina? And why now?

The main answer is that new neuroscience, which has been very little reported outside of scientific journals, is providing truly revolutionary new information about what the vagina is and does – information that, in my mind, makes our entire way of seeing that organ, which is regarded generally, in this culture, as merely a sex organ – obsolete. New information in related fields is also transforming, or should transform, our understanding of sex itself for women.

The main headline, in my view? The new science has established a radically new insight: that there is such a strong brain-vagina connection in women that many of the neuroscientists whom I interviewed called it “a single system”. More remarkably, few of us know that when a woman has an orgasm – and, even before that, when she feels empowered to think about pleasurable sex, anticipate it, focus on how to get it, and feels in control of and knowledgeable enough about her body to know she can probably reach orgasm during sex – her brain gets a boost of the neurotransmitter dopamine. Then, in orgasm, opioids and oxytocin are also released. This experience does not just yield pleasure, a fact that is well known; it also yields specific states of mind.

Dopamine is what I call the ultimate feminist neurotransmitter: it yields motivation and goal-orientedness, trust in one’s own judgement and, most notably of all, in my mind, confidence. (Cocaine, for instance, powerfully stimulates release of dopamine – hence the crazy confidence and sociability of coke users, at least under the influence, responding to that boost). Opioids give the brain the sensation of ecstasy or transcendence; and finally, oxytocin – which can be released both when a woman’s nipples are being stimulated and during the contractions of orgasm – creates a sense of bonding, caring and intimacy. Oxytocin has been shown in studies to give people with heightened levels an advantage in reading the emotions of faces.

So, given this chemical bath, it is fair to say that the vagina is not just a sex organ at all, but a powerful mediator of female confidence, creativity and the sense of the connections between things.

Realizing the nature of this brain-vagina connection led me, as a feminist, to have the next obvious insight. If female anticipation of pleasurable sex, and female orgasm, led to this kind of mood-alteration – among many other newly-documented outcomes I report on in the book – this also explains why female sexuality, and the vagina in particular, have been controlled, abused, targeted, derided and shamed. And why women have been mystified and kept in ignorance of their own sexual responses – for five millennia, certainly in the west. The dopamine loop also, of course, explains why some cultures practice cliterodectomy and infibulations – practices that we should now understand alter not simply the body and sexual functioning, but the influences on the female brain itself.

In the book, I survey the cultural history of the vagina also. When you put the history together side by side with these astonishing new discoveries about the neuroscience of female desire, you comprehend, as one reader put it, “the whole story of why the vagina must be targeted and shamed in one big lie.”

The, to me, mindblowing insights from this cutting-edge science do not end there: I learned that a strong body of data now show that the harm or injury of “nonviolent” rape goes far beyond what we (or the courts) have realized. Rape or sexual abuse that women may have experienced can change minute aspects of their bodies’ and minds’ very functions. It can alter, for example, the operation of their baseline autonomic nervous systems, so that raped women in one study (by Rellini and Meston) have different physiological responses to erotic videos and even to physical exercise than a control group of women who have not been so traumatised. Further; a researcher named Dr Burke Richmond has found a constellation of seemingly unrelated medical symptoms – from “phobic postural sway”, which allows a woman literally to be more easily pushed over, to tinnitus (ringing in the ears) and perceptual problems such as vertigo – which last for years after a “nonviolent” rape.

These and other outcomes should radically alter the way the crime of rape is perceived and prosecuted. The new science establishes that in terms of harm, there is no such thing as a nonviolent rape. This should change the way rape is treated: the talking cure, for instance, often is not enough.

The new science offers some remarkable positive insights. These are especially in a situation such as ours in which, 40 years after “the sexual revolution”, studies show that 30-40% of western women self-report “hypoactive sexual desire”. In other words, they are just not that into it, probably because they are not having reliably good enough experiences with it. About 30% also report being unable to reach orgasm regularly during lovemaking. The good news from the new science is that we have misunderstood women’s anatomy and pleasure; with better knowledge, we might address the issue of women’s unsatisfactory sexual experience.

Scientists, for instance, have found a “neural arm” – horrible language, but our vocabulary is very impoverished – in the female pelvis, which they had not known existed. This has led to a reassessment of the previous assumption that the clitoris and “g-spot” were separate entities: instead, they form the north and south of the same neural structure. (This explains why over 90% of women reached orgasm – in lab conditions, with strangers – when both parts of their bodies were stimulated at the same time.) Drs Barry Komisaruk and Beverly Whipple have recently found that when you stimulate different parts of a woman’s vagina, cervix or clitoris, she experiences different emotions and the touch activates different brain functions. Komisaruk has also identified a new center of sexual sensation in women, at the mouth of the cervix.

These scientists have also found that female “pelvic innervation” (that is, neural wiring) is very different from male pelvic innervation: women have eight or or so tangles of “neural termini” all over their pelvises – from vaginal walls to clitoris to perineum and anus and so on, and every woman is different. The male system is simpler and more regular. So female and male sexual response, in spite of what Masters and Johnson believed, is not identical – and a lover of women does well to identify that specific woman’s responses, unique to her, rather than assuming he or she “knows what works” from general past experience.

Also amazing, to me, is the discovery of Dr Jim Pfaus of Concordia University in Canada of the role played by female sexual pleasure and desire in mate selection (from experiments in lower mammals). It was liberating to me to witness in his lab how obvious it was that evolution, or Nature (call it what you will), had so valued female desire. It put the issue beyond the contested realm of culture and value judgments. As he put it, his lab rats had never heard themselves be called “sluts”.

Most powerful to me of all of this transformative information is the fact that I now know how powerfully the vagina affects female consciousness, confidence, risk-taking and autonomy. These insights answer so many questions. Rather that asking “why the vagina? Why now?”, I am now more inclined to ask: why the repressive patriarchal silence about such important information? And why tolerate it any longer?