Dr. Weeks’ Comment:  The Economist is a sober well-respected journal which is read by discerning professionals who will be disturbed to read this book review. (see following re “Fourth Estate”)   Doctors, however, will not be surprised to read this nor will the “instructors” of many doctors, the drug reps.  Scientists, however, like the brilliant Dr. Stuart Kauffman who kindly called my attention to this article, are shaking their heads…

“doctors are left ignorant about the drugs they are prescribing, and which will make their patients sick or get well, or even live or die…

“…It would be unsettling if, upon prescribing you a drug, your doctor admitted that the scientific research about what exactly the drug did, and how effective it was at doing it, was patchy and distorted, sometimes to the point where nobody has any real idea of what effects the drugs they are prescribing are likely to have on their patients…”

Pick your pill out of a hat 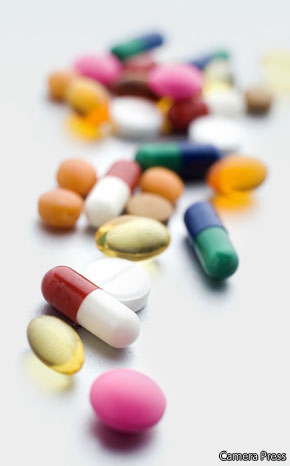 Bad Pharma. By Ben Goldacre. Fourth Estate; 430 pages; £13.99. To be published in America in January by Faber and Faber; $28. Buy from Amazon.com,Amazon.co.uk

DOCTORS like to project an air of authority when making their clinical decisions. Patients like it too, for it is reassuring to think that one’s health is in the hands of an expert. It would be unsettling if, upon prescribing you a drug, your doctor admitted that the scientific research about what exactly the drug did, and how effective it was at doing it, was patchy and distorted, sometimes to the point where nobody has any real idea of what effects the drugs they are prescribing are likely to have on their patients.

But that is the reality described in “Bad Pharma”, Ben Goldacre’s new book. A British doctor and science writer, he made his name in 2008 with “Bad Science”, in which he filleted the credulous coverage given in the popular press to the claims of homeopaths, reiki therapists, Hopi ear-candlers and other purveyors of ceremonious placebos. Now he has taken aim at a much bigger and more important target: the $600-billion pharmaceutical industry that develops and produces the drugs prescribed by real doctors the world over.

The book is slightly technical, eminently readable, consistently shocking, occasionally hectoring and unapologetically polemical. “Medicine is broken,” it declares on its first page, and “the people you should have been able to trust to fix [its] problems have failed you.” Dr Goldacre describes the routine corruption of what is supposed to be an objective scientific process designed to assess whether new drugs work, whether they are better than drugs already on the market and whether their side effects are a price worth paying for any benefits they might convey. The result is that doctors, and the patients they treat, are hobbled by needless ignorance.

So, for instance, pharmaceutical companies bury clinical trials which show bad results for a drug and publish only those that show a benefit. The trials are often run on small numbers of unrepresentative patients, and the statistical analyses are massaged to give as rosy a picture as possible. Entire clinical trials are run not as trials at all, but as under-the-counter advertising campaigns designed to persuade doctors to prescribe a company’s drug.

The bad behaviour extends far beyond the industry itself. Drug regulators, who do get access to some of the hidden results, often guard them jealously, even from academic researchers, seeming to serve the interests of the firms whose products they are supposed to police. Medical journals frequently fail to perform basic checks on the papers they print, so all sorts of sharp practice goes uncorrected. Many published studies are not written by the academics whose names they bear, but by commercial ghostwriters paid by drug firms. Doctors are bombarded with advertising encouraging them to prescribe certain drugs.

The danger with a book like this is that it ends up lost in abstract discussion of difficult subjects. But Dr Goldacre illustrates his points with a plethora of real-world stories and examples. Some seem almost too breathtaking to be true””but every claim is referenced and backed up by links to research and primary documents. In scenes that could have come straight from a spy farce, the French journal Prescrire applied to Europe’s drug regulator for information on the diet drug rimonabant. The regulator sent back 68 pages in which virtually every sentence was blacked out.

And of course, the upshot of all this is anything but abstract: doctors are left ignorant about the drugs they are prescribing, and which will make their patients sick or get well, or even live or die. Statins, for instance, lower the risk of heart attacks, and are prescribed to millions of adults all over the world. But there are several different sorts of statin. Because there is little commercial advantage to be gained by comparing the efficacy of the different varieties, no studies have done so in a useful way.

Bereft of guidance, doctors must therefore prescribe specific statins on the basis of little more than hunches or personal prejudice. As Dr Goldacre points out, if one drug is even a shade more effective than its competitors, then thousands of people prescribed the inferior ones are dying needlessly every year for want of a bit of simple research. That is a scandal. Worse, the bias and distortions that brought it about are repeated across the entire medical industry. This is a book that deserves to be widely read, because anyone who does read it cannot help feeling both uncomfortable and angry.